"To use the name of God to justify violence is blasphemy," pope says 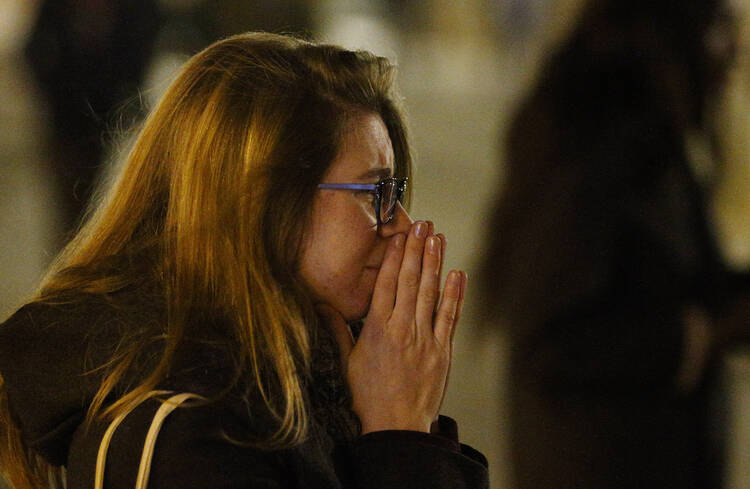 Pope Francis has firmly condemned last Friday’s terrorist attacks in Paris as “an unqualifiable affront to human dignity” and said, “to use the name of God to justify the path of violence is blasphemy.”

He expressed his profound condolence to the president and people of France and his closeness to the family members of the victims and to the injured, when he addressed thousands of pilgrims from many countries in St. Peter's Square at midday Sunday, Nov. 15.

“I wish to express my deep sorrow at the terrorist attacks that bloodied France late Friday evening and caused numerous victims” and “I extend to the president of the French Republic and to all the citizens (of that country) the expression of my profound condolence,” he said. “I am close in particular to the family members of all who have lost their lives, and those who have been injured,” he added.

According to the latest figures 129 people died and 352 were injured (99 of them are still in a critical condition) following the carefully coordinated terrorist attacks on Friday evening, Nov. 13, for which the Islamic State (ISIS) has claimed responsibility.

“Such barbarity leaves us dismayed and we ask how the heart of man can conceive and realize such horrible events that have not only disturbed France but also the whole world,” he said.

“In the face of such intolerable acts, one cannot but condemn the unqualifiable affront to the dignity of the human person,” he stated.

He reaffirmed “with vigor” that “the path of violence and of hate does not resolve the problems of humanity,” and said, “to use the name of God to justify the road of violence is blasphemy.” This last declaration was a reference to the fact that some of the terrorists were heard shouting out “Allah u-Akbar” (“Allah is Great!”) as they launched their deadly attacks.

He invited the thousands of Romans and pilgrims from many countries that were present in St. Peter’s Square and the millions watching on television to “to join with me in prayer, as we entrust the innocent victims of this tragedy to the mercy of God.”

He prayed to the Virgin Mary, “the mother of mercy” that she may “arouse in the hearts of everyone thoughts of wisdom and proposals of peace” - a prayer that seemed to call for the containment of the sentiments of retaliation and war, as well as calls for the expulsion of immigrants that are being voiced in France, a country of 65 million people, and elsewhere following these terrible events.

“We ask her to protect and watch over the dear French nation, and over Europe and the world,” the pope said, and went on to invite everyone to pray in silence for a brief moment for the victims. Afterwards, he led them in the recital of the Hail Mary.

The previous day, Nov.14, Francis told Italy's Catholic TV channel that “there is no religious or human justification for such violence.”

“I cannot comprehend it.  These things are difficult to understand; they are done by human beings. That is why I am pained and saddened, and that is why I pray,”, he confided in a phone conversation with Lucio Brunelli, the director of the channel.   He referred to the Paris attacks as “a piece” of that Third World War that is being fought “piecemeal” in many countries, and said “there is no justification for such things.”