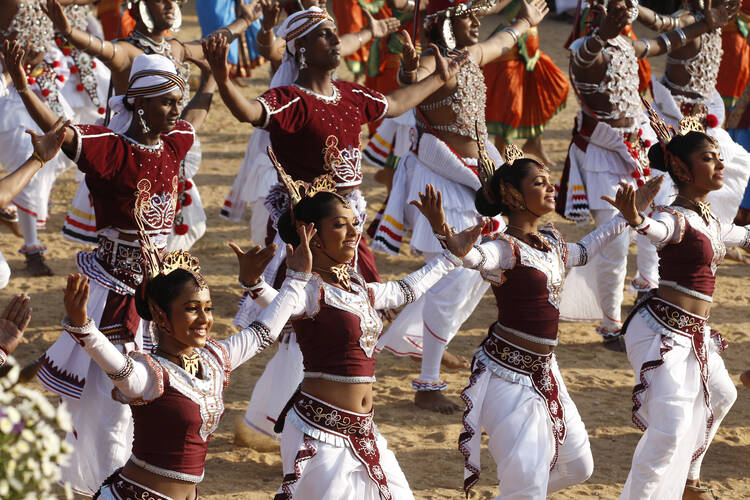 More than half a million Sri Lankans applauded enthusiastically, many were moved to tears, when Pope Francis declared Joseph Vaz, the 17th century missionary priest, the first saint of this beautiful island in the Indian Ocean. And then the bells pealed out with joy, drowning the applause but not the emotions, and the choir sang with great gusto the hymn to the new saint. It was a truly awesome moment. History was made.

“We have waited centuries for this moment,” Pradecpica Fernando, a housewife from Colombo told me at the ceremony. She and her husband, Fernando, an insurance agent, had come with their son and daughter for the ceremony and had arrived at 4.30 a.m. to make sure they got in before the gates closed. “It means so much to us Catholics. Finally, we have got our own saint in Sri Lanka,” she said, expressing her great joy.

Tens of thousands had camped out here the night before in Galle Front Green, on the waterfront, where the canonization mass was celebrated, to ensure they would be present at this historic moment in the history of the Catholic Church in this island which is the size of Sicily. Tens of thousands of others arrived in buses organized by their local parishes. The parish of St Theresa, for example, sent 15 buses full of parishioners, to this place where in 1995 John Paul II had declared him blessed. Many women came dressed in colorful saris, while young people wore T-shirts, others sheltered under umbrellas from the scorching sun.

Significantly, 10,000 Catholics, including whole families, came from Goa, India, for the canonization because Joseph Vaz was born in Goa, in 1651 and died in Sri Lanka in 1711. That the Catholic Church was able to survive in Sri Lanka during the time of Dutch colonial rule (1658-1796) was due, in no small degree, to the life and work of this courageous Oratorian priest. He decided to come here when he heard of the terrible plight, even persecution of the Catholics under Dutch rule, and the fact they had no priests. In 1687, he managed to entry the island disguised as a beggar, and went on to care for the dispersed Catholic community.

Pope Francis recalled all this in his homily, during a profoundly prayerful mass, celebrated in English, Singhalese and Tamil, with enchanting hymns and music. He celebrated the mass early morning because of the heat, but arrived 45 minutes ahead of that so that he could greet the people: he drove among them in an open popemobile, to their immense delight. He is greatly loved and admired in this majority Buddhist country, not only by Catholics but also by the followers of other religions too- Buddhist, Hindus and Muslims, because – as many of them told me –“he is humble” and “he cares for the poor and the needy, as well as those who are suffering,” and “he preaches harmony and reconciliation.”

The Jesuit pope, who was welcomed by Kandian dancers and drums on his arrival, hailed the new saint in his homily as “a great missionary of the Gospel,” who responded to Christ’s call to make disciples of all nations “not only by his words but, more importantly, by the example of his life.”

He recalled how Saint Joseph Vaz left his native Goa and came to this island “inspired by missionary zeal and a great love of its people” and “because of religious persecution, he dressed as a beggar, performing his priestly duties in secret meetings of the faithful, often at night.” His efforts “provided spiritual and moral strength to the beleaguered Catholic population,” the pope said.

The new saint had “a particular desire to serve the ill and suffering,” he recalled, and his ministry to the sick during a smallpox epidemic in Kandy was so appreciated by the king that he was allowed greater freedom to minister, and so could reach out to other parts of the island. “He spent himself in missionary work and died, exhausted, at the age of fifty-nine, revered for his holiness,” he added.

In Saint Joseph Vaz, he said, “we see a powerful sign of God’s goodness and love for the people of Sri Lanka,” and he continues to be “an example and teacher for many reasons.” The Jesuit pope focused on three of these reasons.

First, he said, the new saint “was an exemplary priest” who “teaches us how to go out to the peripheries, to make Jesus Christ everywhere known and loved.” Like us today, he lived at a period of rapid and profound transformation when “Catholics were a minority, and often divided within; there was occasional hostility, even persecution, from without.” And yet, “because he was constantly united with the crucified Lord in prayer” he became for all people “a living icon of God’s mercy and reconciling love.”

Second, the Pope said Sri Lanka’s first saint “shows us the importance of transcending religious divisions in the service of peace. His undivided love for God opened him to love for his neighbor; he ministered to those in need, whoever and wherever they were.” His example “continues to inspire the Church in Sri Lanka today,” which provides service to all- irrespective of race, creed, tribe, status – through her schools, hospitals, clinics, and many other charitable works.

And in return for this service, Francis said, the Church only asks for one thing: “the freedom to carry out this mission.” He emphasized the fact that “religious freedom is a fundamental human right” and it means that “each individual must be free, alone or in association with others, to seek the truth, and to openly express his or her religious convictions, free from intimidation and external compulsion.” He said Saint Joseph Vaz “teaches us that genuine worship of God bears fruit not in discrimination, hatred and violence, but in respect for the sacredness of life, respect for the dignity and freedom of others, and loving commitment to the welfare of all.”

Third, the Argentine Pope said the new saint “gives us an example of missionary zeal.” He came to Ceylon (the name of the country until 1972) to minister to the Catholic community, but “he reached out to everyone” and knew how “to offer the truth and the beauty of the Gospel in a multi-religious context, with respect, dedication, perseverance and humility.” Francis said this is the path the followers of Jesus are called to take today too.

The Government had declared this day a national holiday to facilitate people attending the mass and canonization ceremony. The whole ceremony was broadcast live on national TV and touched millions in this majority Buddhist country (where there are also sizeable Hindu and Muslim communities), not just the island’s 1.5 million Catholics. Buddhists attended the canonization ceremony too, which took place at the beginning of mass, and one of them, a senior government figure who asked not to be identified, told me, “This is a great day for the Christians in this island, but it is also a great day for Sri Lanka.”

Gerard O’Connell
@gerryorome
Show Comments (
1
)
Comments are automatically closed two weeks after an article's initial publication. See our comments policy for more.
Lisa Harris
7 years 6 months ago
This reading helped me out too much and continues to guide others.Excellent work! Walking Dead Jacket On DesertLeather