Pope Calls for Peace, says: “Truly There Are Too Many Tears This Christmas!’ 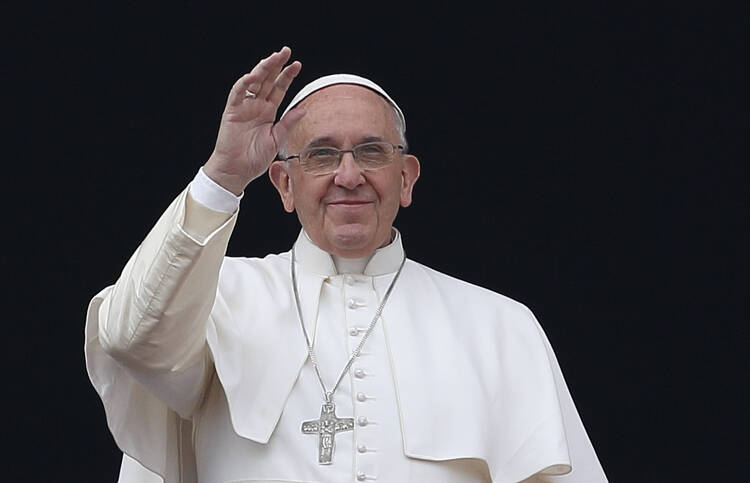 Pope Francis highlighted the killing and maltreatment of children in so many countries as he issued a passionate plea for peace in his second Christmas message to the city of Rome and to the World ( “Urbi et Orbi”), and reminded his global audience that “Jesus is the salvation for every person and for every people.”

Speaking to tens of thousands of people gathered in St Peter’s Square, at midday on Christmas day, the first Latin American pope also prayed for the victims of Ebola in three African countries and urged the international community to help them.

His Christmas message was transmitted by TV, radio and other media to an estimated global audience of some 2 billion people. As is traditional on this occasion, the first Jesuit pope spoke from the central loggia of St Peter’s Basilica, just as he did on the day of his election.

In his brief talk to his global audience, he conveyed his own intense feeling at the tremendous suffering in the world—and especially that of children in so many lands—due to war, armed conflict. It is worth mentioning that Pope Francis added the second last paragraph of his Christmas message below—the one about the suffering of children—to the original text that was distributed by email in advance to the media. It conveys powerfully his deepest concern and feeling at how children are maltreated in today’s world.

He prayed especially to the Infant Prince of Peace, to bring peace to the Middle East, in particular to war torn Iraq and Syria, and he expressed his deep concern at the plight of young and old refugees and displaced persons there as they face the harshness of winter. Yesterday, he spoke to some of them by phone to express his closeness, and in an earlier message to Christians in the Middle East, he revealed that he plans to visit and comfort them.

He prayed for peace in the land where Jesus was born, which he visited last May, and he pleaded for support for the peace process there between Israelis and Palestinians. He prayed too for an end to the conflict and killings in Nigeria, the Democractic Republic of the Congo, the Central African Republic, as well as in Libya, Sudan and the Ukraine. And he prayed for the children massacred recently in Pakistan.

Normally the balcony and central loggia of St Peter’s Basilica from where he speaks is decorated with flowers for Christmas, but at Francis’ specific request it was devoid of any such decoration this year as a way of emphasizing the simplicity and poverty in which Jesus, the Son of God, was born into this world.

Pope Francis concluded his worldwide message as he began, by wishing everyone “Happy Christmas!”

Here is the full text of the Pope’s “Urbi et Orbi” message.

Jesus, the Son of God, the Saviour of the world, is born for us, born in Bethlehem of a Virgin, fulfilling the ancient prophecies. The Virgin’s name is Mary, the wife of Joseph.

Humble people, full of hope in the goodness of God, are those who welcome Jesus and recognize him. And so the Holy Spirit enlightened the shepherds of Bethlehem, who hastened to the grotto and adored the Child. Then the Spirit led the elderly couple Simeon and Anna into the temple of Jerusalem, and they recognized in Jesus the Messiah. "My eyes have seen your salvation", Simeon exclaimed, "the salvation prepared by God in the sight of all peoples" (Lk 2:30).

I ask him, the Saviour of the world, to look upon our brothers and sisters in Iraq and Syria, who for too long now have suffered the effects of ongoing conflict, and who, together with those belonging to other ethnic and religious groups, are suffering a brutal persecution. May Christmas bring them hope, as indeed also to the many displaced persons, exiles and refugees, children, adults and elderly, from this region and from the whole world. May indifference be changed into closeness and rejection into hospitality, so that all who now are suffering may receive the necessary humanitarian help to overcome the rigors of winter, return to their countries and live with dignity. May the Lord open hearts to trust, and may he bestow his peace upon the whole Middle East, beginning with the land blessed by his birth, thereby sustaining the efforts of those committed effectively to dialogue between Israelis and Palestinians.

May Jesus, Saviour of the world, protect all who suffer in Ukraine, and grant that their beloved land may overcome tensions, conquer hatred and violence, and set out on a new journey of fraternity and reconciliation.

May Christ the Saviour give peace to Nigeria, where more blood is being shed and too many people are unjustly deprived of their possessions, held as hostages or killed. I invoke peace also on the other parts of the African continent, thinking especially of Libya, South Sudan, the Central African Republic, and various regions of the Democratic Republic of the Congo. I beseech all who have political responsibility to commit themselves through dialogue to overcoming differences and to building a lasting, fraternal coexistence.

May Jesus save the vast numbers of children who are victims of violence, made objects of trade and trafficking, or forced to become soldiers. May he give comfort to the families of the children killed in Pakistan last week. May he be close to all who suffer from illness, especially the victims of the Ebola epidemic, above all in Liberia, in Sierra Leone and in Guinea. As I thank all who are courageously dedicated to assisting the sick and their family members, I once more make an urgent appeal that the necessary assistance and treatment be provided.

Infant Jesus, my thoughts go to all those children who today are killed and maltreated, both those who (suffer this way) before they see the light , deprived of the generous love of their parents and buried in the egoism of a culture that does not love life, and those who are displaced by reason of wars and persecutions, abused and exploited before our eyes, and those children massacred under bombs, also there where the Son of God was born.  Still today their silent impotence cries (to us) under the sword of many Herods  Over their blood stands today the shadow of the modern-day Herods.

Truly there are so many tears this Christmas, together with the tears of the Infant Jesus.

Dear brothers and sisters, may the Holy Spirit today enlighten our hearts, that we may recognize in the Infant Jesus, born in Bethlehem of the Virgin Mary, the salvation given by God to each one of us, to each man and woman and to all the peoples of the earth. May the power of Christ, which brings freedom and service, be felt in so many hearts afflicted by war, persecution and slavery. May this divine power, by its meekness, take away the hardness of heart of so many men and women immersed in worldliness and indifference. May his redeeming strength transform arms into ploughshares, destruction into creativity, hatred into love and tenderness. Then we will be able to cry out with joy: "Our eyes have seen your salvation".

Gerard O’Connell
@gerryorome
Show Comments (
1
)
Comments are automatically closed two weeks after an article's initial publication. See our comments policy for more.
Bill Mazzella
7 years 4 months ago
Francis is truly a great prophet of our times. He gets the message of Jesus to free the captives as he pleads for the forgotten children while hedge funds parade as the model of the day. BTW, it might be well for all those worshipers of Fox News to know that Roger Ailes advised Nixon to make a speech that he would eradicate poverty. "Under an idea he called the “Challenge of the 70s,” Ailes advised Nixon to “make a major address on this and state publicly that poverty, air and water pollution will be eliminated in America totally by 1980.” Sherman, Gabriel (2014-01-14). The Loudest Voice in the Room: