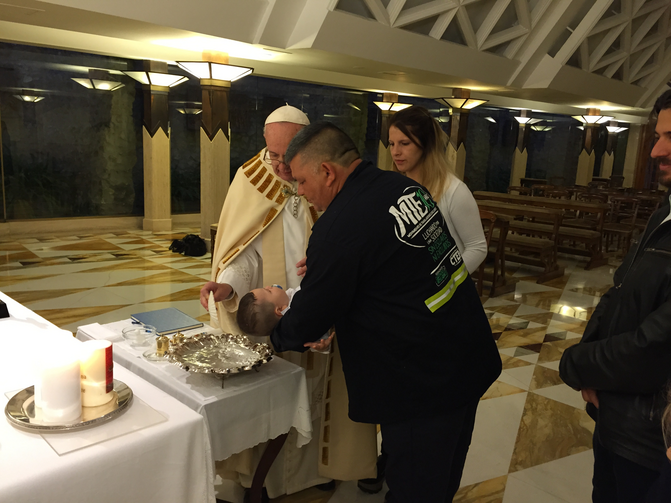 In yet another highly significant expression of his love for the poor and the excluded of this world, Pope Francis yesterday baptized the son of Sergio Sanchez, the leader of the “waste-pickers” cooperative in Buenos Aires who was present at his inauguration as Bishop of Rome. He did so in a private ceremony at Santa Marta, the Vatican guest house where he resides.

The simple and profoundly moving ceremony took place at five o’clock Saturday evening, Oct. 31, in the chapel of Santa Marta. The child was born in Buenos Aires on March 20 and there are no prizes for guessing his name: Francisco!

In a brief two-minute homily before the baptism, Francis, wearing an ivory colored cope and speaking in a gentle voice, recalled how before Jesus returned to the Father in heaven, he instructed his apostles to go into the whole world and make disciples of all people, and baptize them. Ever since then, he said, the faith has been passed down from generation to generation in “an unbroken chain” to this very day, and little Francisco is the newest “link in that chain.” And when it comes to his turn to be a father he too will bring his child to be baptized, the pope added. He told the parents that their decision to bring the child to be baptized “is an option for life, it’s an option for hope, knowing that the Lord waits for us, and never fails us!”

Mr. Sanchez wore his waste-pickers overalls for the baptism as he had done at Francis’ inauguration ceremony, and he held the child as the pope baptized him, while his wife Jacqueline, full of emotion, and the five other guests looked on.

Following the baptismal book, Francis had earlier anointed the child on the forehead and on the chest with the oil of chrism that he had blessed on Holy Thursday, but then he added to that tradition by anointing the child’s hands too. He explained this last anointing: “I like to do this because a person not only shows his dignity with his forehead when he looks at you, the person also expressess that dignity with his hands through his work.”

Afterwards Jacqueline told La Nacion’s Vatican correspondent, Elisabetta Piqué (my wife), “It was the first time I saw the pope, and it was a very great emotion to be standing beside someone so important. It was a unique experience to have him baptize my first child. I wept a little and am still without words. I am living this blessing.”

Mr. Sanchez, 50, has two other boys, now in their mid-teens, from a former union, but this is the first child from his marriage to Jacqueline, 27. She’s three months pregnant and expecting their second child. “We’ll call her Francisca [Frances],” she told the pope when they met for the first time in a waiting room before the ceremony. Sergio, her husband, made the pope laugh when he added with a smile, “If we have another boy we’ll call him Francisco Segundo [Francis the Second]."

When the pope entered the waiting room he first shook hands with all present, before throwing his arms around Sergio and embracing him with a big smile. Then looking at him, Sanchez later told La Nacion, “Francis asked if I continued praying for him, and then he encouraged us to continue giving strength to our people, and to continue working so there is no social exclusion.”

Francis next greeted Jacqueline, and then took the child in his arms and kissed him. He listened as Sergio told him they had arrived in Rome that Saturday morning after a 23-hour flight from Buenos Aires; they had taken this very long route because it was the cheapest way possible, and they return home on Monday, “because I have to get back to work.”

After the ceremony Mr. Sanchez told La Nacion, “The baptism of little Francis is not only important for my family, for my wife, it’s also important for all the people. Because I now return to Argentina, which is living through a moment of change and uncertainty and I am able to share his encouragement for the excluded, for the popular economy, for the waste-pickers, the street-sellers, the recyclers, the peasants, the indigenous peoples and for the right to “the 3 Ts”—‘trabajo, techo, terra [work, a home and land]—which the pope called for in his meeting with the popular movements in Santa Cruz della Sierra, Bolivia, last July."

Mr. Sanchez is leader of the 15,000 waste-pickers in Buenos Aires (5,000 of whom are registered). He told me he got to know Bergoglio when he was archbishop of Buenos Aires and was stunned and deeply moved when after his election as pope he invited him to the inauguration ceremony in St. Peter’s Square on March 19, 2013. He said he attended that historic event as representative not only of the waste-pickers of Buenos Aires, but also as representative of the countless millions of excluded persons in this world who struggle every day to eke out a living by collecting paper, empty bottles, tins and other items on the streets of cities across the world, and then sell them to those who are in the recycling business.

Recalling that awesome moment, he laughed as he told me, “When I arrived at Buenos Aires airport after attending the inauguration, I felt like Maradona after winning the World Cup: there was a battery of TV cameras, photographers and reporters waiting for me!” Speaking to him, however, it is clear that all this celebrity status has not gone to his head; he remains a humble, hard-working man.

This was confirmed to La Nacion, by Juan Grabois, a young lawyer and activist of the Confederation of the Workers of the Popular Economy. He too knows the pope well from his days in Buenos Aires, and he traveled from there to be the godparent of little Francisco. Describing the baptism as “a marvelous thing,” he added, “Sergio is a leader who is not a sycophant. Because of his sincerity and honesty he has a very special bond with Francis, and the baptism was very beautiful, very moving.”

Like Mr. Sanchez earlier, Mr. Grabois too interpreted the baptism as “in a way, reaffirming the rights of the workers in this sector at a particular moment in Argentina, when there is uncertainty.” This was a reference to the fact that the country is in the middle of a presidential election run-off in late November, and the poor people and those excluded in Argentina like these waste-pickers are concerned for their future under a new president.

“Little Francis was born into the home of a poor family that struggles every day [for existence], in Villa Fiorito [a poor neighborhood of Buenos Aires], that fights from below, not individually but in a collective way for a better future for all,” Mr. Grabois said.

Both Mr. Sanchez and Mr. Grabois told me that they participated at the meetings of the popular movements organized by the Pontifical Council for Justice and Peace, first in the Vatican, November 2014, and then in Santa Cruz, Bolivia, last July. Their contact person with the Vatican was Father Michael Czerny, a Jesuit priest who is assistant to Cardinal Peter Turkson, the president of that council, and they greatly appreciate him. It came as no surprise then that Czerny was among the small group present at the baptism.

Gerard O’Connell
@gerryorome
Show Comments (
3
)
Comments are automatically closed two weeks after an article's initial publication. See our comments policy for more.
L J
5 years 10 months ago
Its hard to know whether this is a huge public relations / marketing coup on behalf of Pope Francis in the statement of statements, or whether it all just went down the way the article leads the reader to believe. Either way we cried this morning as we read this over coffee, and the Francisco Segundo made the tears flow even more so. What a tremendous gift to the Church this Pope is!!! Bravo Papa Francisco. Le queremos muchisimo! Adelante! AMDG
William Rydberg
5 years 10 months ago
I wouldn't be so cynical about the news coverage friend... The Press is always there watching his every step, because he is the Pope. This is what the Pope does... In my humble opinion this guy never gets in the way of Jesus. He is a true Apostle of Jesus - God come in the flesh... And a nice guy too! And the truth is always stranger than fiction!
Tim O'Leary
5 years 10 months ago
Beautiful example of the Pope's great Christian love for his friends, and the poorest of the poor. We are blessed to have such a person on the chair of St. Peter.