Pope Assures Orthodox: We Want Unity, Not Assimilation or Submission. 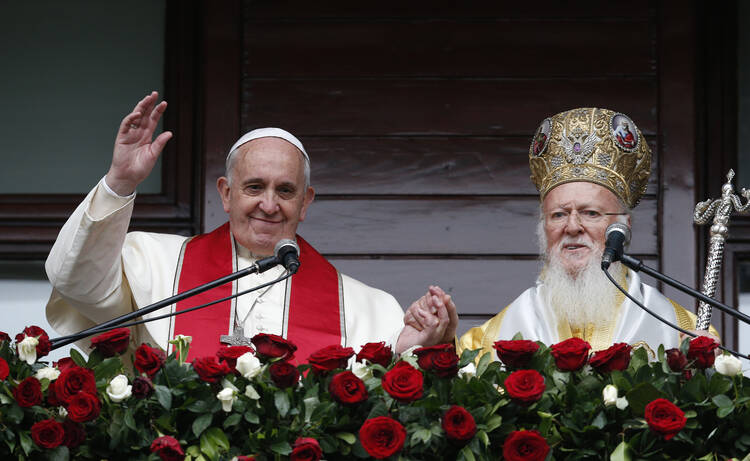 Pope Francis stated unequivocally in Istanbul on November 30 that he, as Bishop of Rome, and the worldwide Catholic Church desire unity – ‘full communion’- with the 300 million member Orthodox Churches, and he added that the only condition for achieving this is “the shared profession of faith.” Significantly, seeking to overcome suspicion and fears, he re-assured the Orthodox that such unity does not in any way mean “the submission of one to the other, or assimilation.”

He made all this abundantly clear when he spoke at the end of the rich, mystical and solemn Orthodox Eucharistic celebration for the feast of Saint Andrew, which was held in the three hundred year-old church of Saint George in the Fanar, Istanbul, on November 30, and celebrated by the Ecumenical Patriarch, Bartholomew 1.

“The one thing that the Catholic Church desires, and that I seek as Bishop of Rome -’the Church which presides in charity,’ is communion with the Orthodox Churches,” he told them in his homily, delivered in Italian, in the crowded church that including the members of the synod which is being held in these days in the Fanar.

He assured the Patriarch and the Orthodox Churches that “to reach the desired goal of full unity, the Catholic Church does not intend to impose any conditions except that of the shared profession of faith.”   This was a particularly strong affirmation aimed at overcoming fears and suspicions among Orthodox that the primacy would mean one of power and not a service of love.

Earlier in his homily, recalling the teaching of the Second Vatican Council, he explained that in any future reunification, the Orthodox Churches would retain all “their liturgical and spiritual traditions” as well as “their canonical disciplines.” And he added, “I believe it is of the greatest importance to reaffirm respect for this principle as an essential condition.”

Francis said that he and the Catholic Church “are ready to seek together, in light of Scriptural teaching and the experience of the first millennium, the ways in which we can guarantee the needed unity of the Church in the present circumstances.”

As archbishop of Buenos Aires, the future pope enjoyed good relations with the Orthodox communities there and attended their liturgies.  From this and other experiences he has reached the conviction that unity cannot be realized just through theological dialogue and commissions, and in his homily he made clear that first and foremost any “authentic dialogue” involves “an encounter between persons, with a name, a face, a past and not merely a meeting of ideas”.

He is convinced that without such personal encounters the theological dialogue dialog will take forever and a day. He believes that left to the theologians alone, Catholics and Orthodox will not be able to reach full communion. As a man who prefers actions to words wherever possible he therefore gives priority to developing good personal relations and to taking common Catholic-Orthodox action wherever possible.  He and the Patriarch outlined some areas for common action both in their addresses at the celebration in St George’s, and in the common declaration they signed afterwards.

In his homily, he called on the Orthodox and Catholic communities to follow the Lord Jesus by listening to the cries of three particular groups: the poor, the victims of conflicts, and the young people.

Since his election as the Bishop of Rome some 20 months ago, Francis has met Patriarch Bartholomew four times, and engaged in substantial conversations with him on each occasion.  He has found a kindred spirit in Bartholomew.  I have seen this as I watched them relate to each other in Rome, in Jerusalem and now in Istanbul. One can see clearly the depth and warmth of their relationship.   That was so evident also in their two addresses they gave at the end of the Divine Liturgy.

Speaking before the Pope, Patriarch Bartholomew noted how the Orthodox-Catholic relationship has “changed direction” since Paul VI and Athenagoras first met in Jerusalem in 1964, and how “the road to Damascus has opened up before us – a road that, while perhaps lengthy and sometimes even rugged, is nonetheless irreversible, with the Lord as our companion, until He is revealed to us in the breaking of the bread.”

Noting that Orthodox and Catholics are now engaged in a dialogue “that befits friends”, Bartholomew told his “dear brother” Francis that “our obligation is surely not exhausted in the past but primarily extends to the future, especially in our times.  For what is the value of our fidelity to the past unless this denotes something for the future?”

And in a statement that Francis would surely agree with, Patriarch Bartholomew said “the Church is called to keep its sight fixed not so much on yesterday as on today and tomorrow” since “the Church exists not for itself, but for the world and for humanity.”   He mentioned some of the problems of the present day, including “diverse divisions, conflicts and animosities, frequently even in the name of God,” and the need for a more equitable distribution of the earth’s wealth, and concern for the environment.   He included in his list the urgent need for “reconciliation, love and justice,” and “the mission of embracing the other, the stranger and even the enemy”.

For all these reasons, he said, “the path towards unity is more urgent than ever for those who invoke the name of the great Peacemaker”.

Patriarch Bartholomew paid a particularly beautiful tribute to Francis saying that in his short time as pope, people already see him “as a herald of love, peace and reconciliation”.  Indeed, he said, “You inspire trust in those who doubt, hope in those who despair, anticipation in those who expect a Church that nurtures all people.”

Furthermore, he said, “You offer to Your Orthodox brothers and sisters the aspiration that during Your tenure the rapprochement of our two great ancient Churches will continue to be established on the solid foundations of our common tradition, which always preserved and acknowledged in the constitution of the Church a primacy of love, honor and service within the framework of collegiality.”

As Ecumenical Patriarch, Bartholomew presides among all Orthodox Patriarchs as “first among equals.”  He also serves as the focal point and spokesman for Orthodox Church Unity, and is the only Primate who can convene inter-Orthodox councils, and is responsible for initiating inter-Church and inter-religious dialogue.

In his address at the end of the celebration today, he referred to this role and told the Pope, “We are working very assiduously” preparing for the Holy and Great Council of the Orthodox Church which is to be held in the Fanar in 2016.  He asked the Pope to pray for the success of that event, at which he also hoped there would be observers from Rome.

He concluded his address by telling the Pope that “the challenges” that face the Orthodox and Catholic Churches in today’s world “oblige us to transcend our introversion in order to meet them with the greatest degree of collaboration.”

He repeated the same idea even more forcefully when he said, “We no longer have the luxury of isolated action. The modern persecutors of Christians do not ask which Church their victims belong to. The unity that concerns us is regrettably already occurring in certain regions of the world through the blood of martyrdom. Together let us extend our hand to people of our time; together let us extend the hand of Him, who alone can save humankind through His Cross and Resurrection.”

At the end of the celebration, the Pope and the Patriarch signed a common declaration in the Fanar, and then appeared on the balcony to bless the people gathered under the rain in the courtyard below.  Afterwards they had lunch together.

Then the Pope met a group of some one hundred young refugees, most of them from Iraq and Syria, but also a small number from Africa.  He wanted to visit one of the twenty-two refugee camps in Turkey but, he said, “That was not possible.”

That afternoon, the Pope also visited the elderly Armenian Patriarch who is seriously ill in hospital.  Afterwards he went to the airport and took the plane back to Rome.

Gerard O’Connell
@gerryorome
Show Comments (
3
)
Comments are automatically closed two weeks after an article's initial publication. See our comments policy for more.
Robert Lewis
7 years 8 months ago
I love these two old men. They are truly beautiful human beings. In some mysterious way, I believe the whole future of the human race is riding on their success, and the success of religious leaders like them.
Henry George
7 years 8 months ago
I know there are some Theological Differences but do we believe in Christ Jesus or not ? Do we have Apostolic Succession or not ? If we do, then why not have intercommunion ? Can someone explain to me why we just don't allow the Orthodox full intercommunion and see what they do in response ?
Laser Frate
7 years 8 months ago
Church merger...gotta love it , Vote YES !