Pope Francis in Armenia: “Let us race together towards full communion” 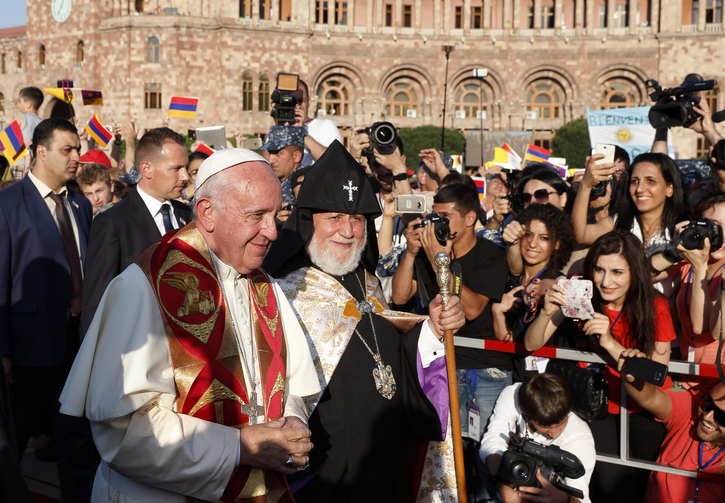 Ever since he arrived in Armenia on Friday, June 24, Pope Francis has repeatedly emphasized the need to work for reconciliation and peace in this tinderbox region of the Caucasus, where opposing political and economic interests are laying siege to peace, with some also supplying arms for conflict.

At the end of his second day here, participating in a major ecumenical event for peace in the main square of Yerevan attended by some 50,000 Armenians, including many young people, he highlighted the urgent need for initiatives “to lay the foundations of a future that will resist being caught up by the illusory power of vengeance, a future of constant efforts to create the conditions of peace.”

Speaking after Armenia’s supreme religious leader, Karekin II, who had spelled out the many obstacles to peace in this land, and in the presence of the country’s president and top political leaders, Francis identified three of those conditions for peace as “dignified employment for all, care for those in the greatest need, and the unending battle to eliminate.” This drew warm applause from the crowd.

They applauded again when he appealed in particular to Armenia’s young people “to strive to be peacemakers, not content with the status quo, but actively engaged in building the culture of encounter and reconciliation.”

He drew a third round of applause when he prayed that God may bless their future of these young people and “grant that the people of Armenia and Turkey take up again the path of reconciliation," and “that peace may also spring forth in Nagorno Karabakh.”

Three million Armenians live in this country, but an estimated nine million more live in many countries across the world. In his speech Francis encouraged Armenians in the diaspora “to be ambassadors for peace.” He is convinced that they can play this role effectively as a result of their own terrible experience 100 years ago. He told them that “even the greatest pain, transformed by the saving power of the cross, of which Armenians are heralds and witnesses, can become a seed of peace for the future.”

The Supreme Patriarch, Karekin II, had spoken first and pulled no punches in presenting the enormous problems facing his country at this time. He told the pope, “Today our nation lives under the difficult situation of an undeclared war, protecting peace within the borders of our country at a heavy price and the right of the people of Nagorno-Karabakh to live in freedom in their maternal cradle. In response to our people’s peaceful aspirations, Azerbaijan violated the ceasefire and began military operations on the borders of the Republic of Nagorno-Karabakh in the month of April. Armenian villages were bombarded and destroyed, soldiers who were protecting the peace as well as school-aged children were killed and wounded, peaceful and unarmed civilians were tortured.”

He went on to refer to his country’s tense relations with Turkey, and expressed the hope that after Francis’ message and “the plea of many countries as well as international institutions” that Turkey “will demonstrate enough bravery to face their history, to end the illegal blockade of Armenia and to cease from supporting Azerbaijan’s militaristic provocations targeted against the right of the people of Nagorno-Karabakh to live in freedom and peace.”

Patriarch Karekin told Francis that because his country is confronting these difficulties his people “feel empathy” for others who are suffering similar trials in the Middle East, in major European cities, in Russia, the United States, Asia and Africa because of acts of terror, and the destruction of the religious and cultural heritages in the conflict zones.

In such situations, Karekin said, “the mission of the Christian churches and religious leaders cannot only be confined to helping the victims, consoling them, and giving pastoral care. More practical steps must be taken on the road to searching for peace by consolidating our efforts in preventing evil, by fostering the spirit of love, solidarity and cooperation in the societies through ecumenical and interfaith dialogue.”

His words synchronized well with what Francis had said in the early part of his speech, where he made a passionate appeal to Christians in Armenia to work with determination to achieve “full unity.” He encouraged them, on the road to this goal, to “walk with one another with sincere trust in our fellow pilgrims, putting aside all suspicion and mistrust.” He urged them to pray fervently for this unity and said, “let us pursue our journey with determination, indeed let us race towards full communion.”

Francis believes, as he stated yesterday, that by showing the world that they can overcome their own divisions through dialogue, Christians can set an example to the whole world that dialogue works, and that peace can be attained by this method and not by the force of arms as happens so often today.