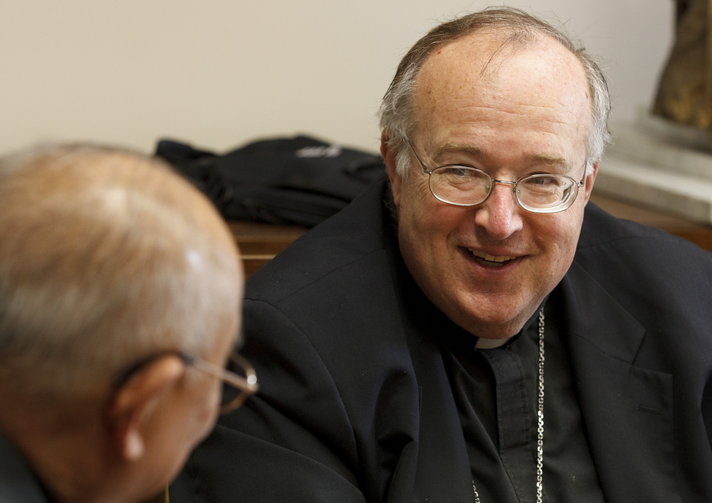 Pope Francis has made another highly significant appointment in the United States by naming Robert Walter McElroy as bishop of the diocese of San Diego in California. Widely recognized as one of the intellectual heavyweights in the American hierarchy and a specialist in the Social Teaching of the Church, he is a pastor who has wholeheartedly embraced the vision and pastoral approach of Pope Francis.

The Vatican announced the appointment at midday (Rome time) March 3. He will be installed as bishop of San Diego on April 15. At the time of his nomination, McElroy was auxiliary bishop of the archdiocese of San Francisco, a position he held since Benedict XVI assigned him to that post on 6 July 2010. He succeeds Bishop Cirilo Flores who died from cancer and a stroke last September, just one year after taking over as pastor of this large diocese.

The San Diego diocese, which includes the city of San Diego and the Imperial Counties, has almost one million Catholics. San Diego is the seventh largest city in the United States, and is located 120 miles (190 km) south of Los Angeles and 18 miles (29 km) from the Mexican border. Blessed Junipero Serra founded the first of his 21 missions in San Diego, the birthplace of California. Today the area covered by the diocese has a large Hispanic population, including many illegal immigrants, a significant Navy presence and is home to important universities including the University of San Diego which, among other things, is a leader in the field of ecology.

“Bishop McElroy is an American analogate of the late Cardinal Carlo Maria Martini,” according to an American prelate who knew both men well. The source, who preferred anonymity, described McElroy as “a prayerful, contemplative man,” endowed “with an extraordinarily gifted intelligence and imagination,” and “not self-promoting.” He portrayed him as a true pastor, concerned about his people and very attentive to them, especially when they are suffering or in difficulty. Moreover, he added, “Bishop Bob” has “the gift of prudence” but also “the courage to break new ground.”

The new San Diego bishop is an expert and scholar of the Church’s teaching on social justice. He fully shares Pope Francis’ call for the Church to be a poor Church and for the poor. In a seminal article written for America magazine, October 2013, entitled “A Church for the Poor” ( http://americamagazine.org/church-poor), he argued that if the Catholic Church in the United States is to be truly “a church of the poor, it must elevate the issue of poverty to the very top of its political agenda.”

In a follow-up interview granted to me for Vatican Insider (http://vaticaninsider.lastampa.it/en/the-vatican/detail/articolo/church-chiesa-iglesia-mcelroy-28939) he explained what this would mean in practice. “First of all – he said - it would mean that the bishops of the United States would explicitly declare that the alleviation of poverty both within the United States and globally constitutes a preeminent claim upon government in the Catholic vision of the common good.”

“In recent years - he noted- the conference of bishops has labeled abortion and euthanasia as the preeminent issues in the political order, but not poverty. This has had the effect of downgrading the perceived importance of poverty as a central focus for the Church’s witness.” He emphasizes the need to prioritize the focus on poverty and at the same time on abortion. “I think that both issues should be intertwined in the Church’s approach to advancing the common good in the political order because I believe that it is compassion which morally unites these two issues – compassion for the suffering of the poor and compassion for the unborn.”

Born into a Catholic family in San Francisco, one of five children, McElroy gained his first degree at Harvard University in 1975, and went onto gain a Master’s degree in history at Stanford University, 1976. After that he entered St. Patrick's Seminary in Menlo Park, the major seminary for the archdiocese of San Francisco, to study for the priesthood, and was ordained priest on April 12, 1980.

He went on to earn a theology degree (STL) from the Jesuit School of Theology in the Graduate Theological Union in Berkeley, California, in 1985, with a thesis titled, “Freedom for faith: John Courtney Murray and the Constitutional question, 1942-1954.” And in 1986 he was awarded a Doctorate in moral theology from the Pontifical Gregorian University with a dissertation that drew substantially from the work of John Courtney Murray in fashioning a framework for Catholic public discourse in American society (Later published by Paulist Press, 1989, as "The Search for an American Public Theology").

In 1989, he gained a PhD in Political Science from Stanford University, with an empirical study of the role that ethics actually plays in foreign policy decision making. It was published by Princeton University Press, 1992, under the title: "Morality and American Foreign Policy: The Role of Ethics in International Affairs." The US State Department used his book for its diplomats, and had it translated into other languages for use in other countries.

Though a variety of possible career options were open to him, McElroy strongly felt the call of God. “I cannot remember a time when I did not want to become a priest,” he told me in an interview. “As I approached priesthood, I could not fathom how any other career path would be richer or more exhilarating than that,” he added.

In the thirty four years since his ordination he has served in a variety of roles, including as a pastor in three different parishes, as Vicar-General in San Francisco archdiocese under Archbishop John R. Quinn and also, for a short time, under Archbishop (now cardinal) William Levada. He also taught in seminary and university, and since 2010 has served as auxiliary bishop in San Francisco. But he said, “The most wonderful years of my priesthood have been in parish life and, for a period of fifteen years, as pastor of the same parish.”

McElroy said he is convinced that “the bishop must constantly witness to the reality that no man, no woman falls outside of the grace of God. In the Gospels, Christ embraces, then heals and only then calls to reform. The ministry of the bishop should pattern itself on this evangelical framework.” Like Francis, he believes in a Church of inclusion not exclusion, and advocates the culture of encounter not that of confrontation.

He said his experience as a bishop has led him to the conclusion that “it is absolutely essential that the Church communicate a sense of invitation and acceptance rather than judgmentalism. In my view, there is no greater barrier to the growth of the Church and the fulfillment of its core mission than the notion that the Church is meant for those who are already holy rather than those who are seeking in the messiness and challenges of their lives to become holy.”

He believes the Church “must find new ways to reach out to young adults through the social media, personal contact and invitations to service to the poor and the marginalized.” Moreover, he said, “it is essential for a bishop to listen directly to the voices of those who have drifted from the Church, are alienated from the Church, or are simply indifferent to the Church.” From his experience as a bishop, he has also concluded that “complacency is a great enemy of the mission of the Church.”

Show Comments (
3
)
Comments are automatically closed two weeks after an article's initial publication. See our comments policy for more.
ed gleason
5 years 11 months ago
A loss to us in San Francisco but a blessing to San Diego and the US Catholic Church. Thank you Francis.
Bill Mazzella
5 years 11 months ago
He believes that “the central task of a bishop is to be a pastor. More specifically, the central task of a bishop is to point to God’s grace in the life of men and women in a way that nurtures and deepens the community’s understanding that God is constantly at work among them. He is at work in their struggles, their hopes, their failures and their dreams.” This is what is meant by Gospel truth.
Michael Barberi
5 years 10 months ago
I live in the city of Carlsbad, in northern San Diego county. I look forward to welcoming Bishop McElroy.