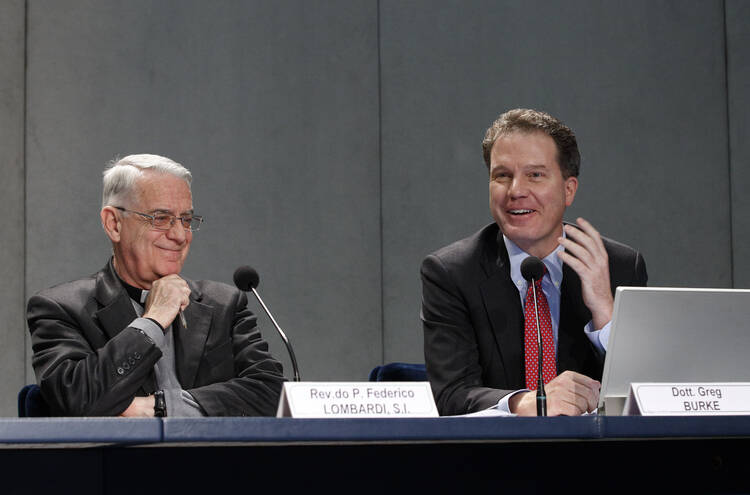 Pope Francis has appointed two laymen—Greg Burke, an American, and Stefano D’Agostini, an Italian—to key positions in the Vatican’s new communications operations. Mr. Burke becomes a deputy director in the Holy See’s Press Office, while Mr. D’Agostini takes over as head of the Vatican’s Television Center.

The Vatican made the announcement today, Dec. 21.

Last July, after wide consultation, the pope established the Secretariat for Communications and appointed Msgr. Dario Vigano, an Italian and then-director of the Vatican Television Center (CTV), as head of this new structure. Today’s appointments are to be read as some of the early personnel changes in that reform project.

Greg Burke, 56, a native of St. Louis and graduate of Columbia University, is a member of Opus Dei. A jovial and outgoing American, he was Fox News’ correspondent in Italy and, prior to that, correspondent for Time magazine, also reporting on Vatican affairs, before Benedict XVI called him to work in the Vatican as senior communications advisor to the General Affairs section of the Secretariat of State in 2012. At that time the Vatileaks crisis was in full flood and there was a clear need for greater professional media assistance at higher levels in the Vatican. In that role Mr. Burke acted with professionalism and fidelity, and gained the trust and confidence of senior Vatican officials.

He also became known to Pope Francis, who today appointed him to his new post as deputy to Federico Lombardi, S.J., the Director of the Holy See’s Press Office. Right now Father Lombardi has two other deputies­—Fr. Ciro Benedettini and Dr. Angelo Scelzo—but today’s appointment clearly suggests that Mr. Burke is being positioned to replace him eventually, though not in the immediate future. Mr. Burke, who is fluent in Italian and Spanish, takes up his new role on Feb. 1, 2016.

Also today, Pope Francis appointed Stefano D’Agostini, an Italian layman, as the new director of the Vatican Television Center. He has been identified with CTV for more than 10 years and at the time of his appointment was its technical director: He succeeds Msgr. Viganò.

Gerard O’Connell
@gerryorome
Show Comments (
1
)
Comments are automatically closed two weeks after an article's initial publication. See our comments policy for more.
William Rydberg
6 years 11 months ago
Let's hope that they don't maintain their own independent website via Twitter or Facebook like some of late have been fond of doing, not very professional in my opinion for a Vatican Spokesperson. I find it so hard to discern if a given item is the priority of the one that operates their own independent website or of the Pope, by virtue of the Vatican Communications Department. In my opinion, this was a big issue at the last Synod in the Angloblogosphere... Pax et bonum this Christmastime!