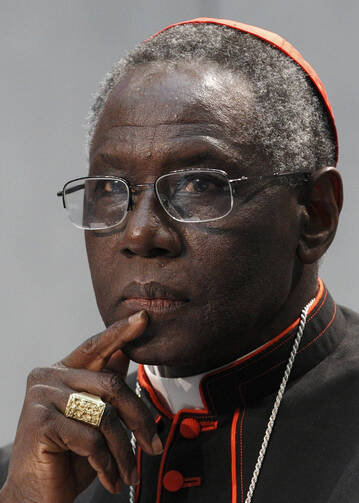 Pope Francis has appointed Cardinal Robert Sarah, 69, from Guinea, West Africa, as Prefect of the Congregation for Divine Worship and the Discipline of the Sacraments.

The Vatican made the announcement on November 24.   He succeeds Cardinal Antonio Canizares Llovera who led this congregation from December 2008 until August 2014 when Pope Francis reassigned him to Valencia as archbishop.

Cardinal Sarah is the second African to hold this senior position in the Vatican; the first was the Nigerian Cardinal Francis Arinze who was head of the same congregation from 2002 to 2008.  He is fluent in French, English and Italian.

At the time of his nomination he was President of the Pontifical Council “Cor Unum” which is an instrument of the pope for charitable and humanitarian response to situations of great need and natural disasters, a post he had held since October 2010.  Prior to that, he had worked in the Vatican from 2001 as Secretary of the Congregation for the Evangelization of Peoples which oversees the work of the churches in Africa, Asian and some other places, and proposes the candidates to be bishops there.  This means he comes to his new post with enormous insider knowledge and experience of the Roman Curia and the wider church.

A low-profile, intelligent, very articulate theological and biblical scholar, with some 22 years of pastoral experience as a bishop in his homeland and thirteen years of service in senior posts in the Vatican.  “He is a gentleman”, a source who knows him well told me. Cardinal Sarah is “straight down the line in Catholic doctrine” regarding the family, life-issues and homosexuality, and “very strong” on the socio-economic questions and on the need for “good political governance” in Africa.  Another source recalled that he was an outspoken and fearless critic of authoritarian and corrupt governments

As prefect of the congregation that oversees the liturgy in the Latin Church and questions relating to the sacraments, Cardinal Sarah will be assisted by the English archbishop, Arthur Roche, who has been Secretary of this congregation since June 2012 and was formerly a diocesan bishop in Leeds  (England) and former chair of the International Commission on English in the Liturgy (ICEL) , and Mgr. Corrado Maggioni, an Italian with over twenty years’ experience in the congregation whom Pope Francis appointed recently appointed as under-secretary, in place of two under-secretaries - monsignors Anthony Ward (England) and Juan Miguel Ferrer (Spain).

Sarah was born in 1945 in what was then French Guinea.  He had to leave his country at the age of twelve to study at the minor seminary at Bingerville in the Ivory Coast.  The following year, 1958, Guinea gained and he and other Guinean seminarians returned home and entered the Seminary of Dixinn in 1960, but then the Marxist party that ruled the country nationalized all private schools, including the seminary, creating problems for his education, but these were eventually overcome. After gaining a baccalaureate at Jean XXIII seminary, 135 kilometers from Conakry, in 1964 he was sent to study in France, at the Grand Seminary of Nancy. But because of political tensions between France and Guinea, he had to move to Senegal where he completed his theological studies at Sébikotane.

He returned to Guinea in 1974 and was appointed as rector of the seminary of Kindia, but also served as a parish priest in four different parishes.

John Paul II appointed him as archbishop of Conakry in August 1979.  He was then the youngest bishop in the world, at the age of 34, and was called “the baby bishop” by the pope.   In the following years he emerged as a natural leader among the French-speaking bishops from Africa and was elected president of the Guinean bishops’ conference, and later of the West African group of episcopal conferences.

In the turbulent period following the death of the country’s Marxist dictator, Sékou Touré, he became the front person in relations with the government.  When John Paul II visited the country in 1992, he publicly urged him to demand that African political leaders abandon the path of violence and corruption convert to honest government.

Cardinal Sarah has participated in many synods, including the most recent extraordinary one on the family, and is greatly respected by the members of the French-speaking language groups at those gatherings in Rome.

Indeed, his leadership qualities and deep spirituality have been consistently recognized by all the popes since Archbishop Giovanni Benelli spotted him while he was apostolic delegate in West Africa in the second part of the nineteen sixties and ordained him priest.   John Paul II called him to work in the Vatican in 2001, as Secretary for the Congregation for the Evangelization of Peoples.  Benedict XVI appointed him as President of “Cor Unum” in   October 2010, and created him cardinal the following month.

His appointment is seen as a strong affirmation by Pope Francis of the importance of the youthful and flourishing Catholic Church in Africa with more than 170 million members, which he hopes to visit in the not too distant future.  Cardinal Sarah is now the most senior African cardinal in the Vatican.