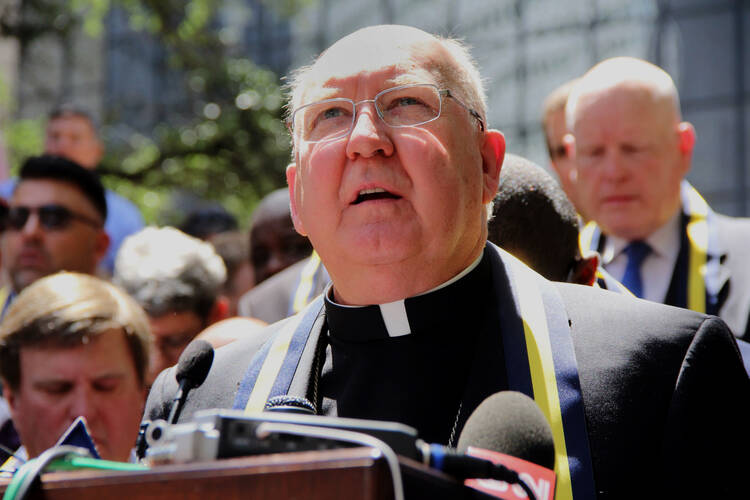 In a surprise but highly significant move, Pope Francis has named Bishop Kevin Farrell of Dallas, Tex., to be the first prefect of the newly created Vatican Department (“dicastery” is the official term) for the Laity, the Family and Life. He thus becomes the senior American prelate in the Roman Curia.

The Vatican made the announcement on Aug. 17.

Pope Francis’ decision to choose an American bishop to head this new department is a clear sign of his high esteem for the church in the United States and for the people of this country that he came to know during his visit last year. Those close to him confirm that he was deeply moved by the faith of American Catholics and by the enthusiastic and warm welcome given to him by the president, the Congress and the American people when he visited Washington, D.C., New York and Philadelphia.

Vatican sources say Francis chose Bishop Farrell because he is known as a pastor “with the smell of the sheep” who has given dedicated service as bishop for the past 14 years, has long pushed for a greater involvement of the laity in the life of the church and is admired by his peers in the U.S. Catholic bishops’ conference as a man of dialogue.

Moreover, as a bishop he has governed with prudence and courage, and has shown considerable skills as an administrator of the Dallas diocese, which has over one million faithful, 74 parishes and 41 schools. He was directly responsible for 94 employees at the diocesan headquarters and a budget of $25.5 million.

By appointing Bishop Farrell to head the new Vatican dicastery, Pope Francis is recognizing also the significant contribution that the church in the United States has made and continues to make to the Holy See and the universal church.

A fluent Italian and Spanish speaker, Bishop Farrell becomes the first prefect of the new Vatican office that comes into existence on Sept. 1, and will have responsibility for the promotion of the Christian life of the laity, couples, families, young people and their mission in the church and in civil society. It will also have responsibility for lay associations and movements in the church.

The new department—which many expect to become a congregation, like those for bishops, clergy and religious—was created out of a merger of the pontifical councils for the laity, the family and the pontifical academy for life. It will begin work with a staff of some 35 persons and will be divided into three sections: the laity, the family and life. It will have a secretary “who could be a lay person” and three lay undersecretaries (one for each of its sections), as stated in the statute approved by the pope and published on June 4.

The appointment "is welcome news given Bishop Farrell’s demonstrated pastoral skills and his recognized administrative abilities,” said Cardinal Donald Wuerl of the Archdiocese of Washington, in a statement released today.

“At a time when our Holy Father is calling the attention of the whole church to the role of the laity and the importance of a robust, pastoral activity and support of family and married life through the establishment of this new dicastery to focus and coordinate this work, the leadership that Bishop Farrell brings will be a blessing for all of us," Cardinal Wuerl said.

Bishop Farrell was born in Dublin, Ireland, on Sept. 2, 1947, the second of four sons, and grew up speaking Gaelic. His older brother, Brian, is also a bishop and secretary of the Pontifical Council for the Promotion of Christian Unity.

After studying at a Christian Brothers’ school in Dublin, he joined the Legionaries of Christ in 1966. He visited the United States the following year while fundraising for the missions in Latin America.

Ordained priest in Rome on Christmas Eve 1978, the archbishop subsequently served as chaplain to the University of Monterrey, Mexico, and gave seminars there in bioethics and social ethics. Moreover, he worked as general administrator of the Legionaries of Christ, with responsibility for seminaries and schools in Italy, Spain and Ireland.

A crisis developed in the Legionaries in the 1970s, and, after what he called “differences of opinion” with its leadership, he left the order and went to the United States. He was subsequently incardinated into the Archdiocese of Washington, D.C., by Archbishop (later Cardinal) James Hickey in the early 1980s, and went onto serve as assistant priest in three parishes of the archdiocese over the next two years. In 1986, he succeeded Father (now Cardinal) Seán O’Malley, O.F.M.Cap., as director of the archdiocese’s Spanish Catholic Center. Two years later, he became assistant executive director and then interim director of Catholic Charities, and from 1989-2001, was secretary of finance for the archdiocese.

In 2001, the cardinal-archbishop of Washington, D.C., Theodore McCarrick, appointed him as vicar-general for the archdiocese and pastor of the Church of the Annunciation. On Dec. 28 of that same year, St. John Paul II named him auxiliary bishop of Washington, and on Feb. 11, 2002, the cardinal ordained him bishop. He served as the main vicar-general and moderator of the curia until 2007, first under Cardinal McCarrick and from May 2006 until March 2007 under Archbishop (now Cardinal) Donald Wuerl.

Pope Benedict XVI appointed him as bishop of Dallas, Tex., on March 6, 2007. It was a diocese then hit hard by the sex abuse scandal, and the new pastor began by reaching out to people, overseeing the settlement of existing cases and working hard to restore the morale of the clergy and making himself available to them. His efforts bore fruit, and at the end of his first year, Jerry Lastelick, a Dallas lawyer who had been part of a group that tried to oust his predecessor over the handling of abuse cases, told The Dallas Morning News that his outreach had created such a new dynamic that “people are willing to saddle up and get in the posse with him.” Bishop Farrell went on to consolidate that good start by working hard to unite the Catholic community in a diocese that he has served with great competence ever since.

Bishop Farrell has served the United States Conference of Catholic Bishops in various roles over these years. He served first as a consultant to the Committee on Migration, which oversees the migration and refugee department, and then as chair of its Committee on National Collections, which supports stewardship and coordinates the collections for social justice, evangelization, education and institutional development. He was also treasurer of the U.S.C.C.B. and chairman of its Committee on Budget and Finance.

At the time of his appointment, he was chancellor of the University of Dallas, and was on the board of trustees of the Papal Foundation, the Basilica of the National Shrine of the Immaculate Conception, the Catholic University of America and the St. Luke Institute in Washington, D.C. He was also president of the New Evangelization of America, and a member of the board of directors of the Friends of the Pontifical Irish College, Rome, Inc.

Sources in the United States say that from the beginning, Bishop Farrell embraced Francis’ vision for the church and is totally supportive of the leadership he is giving in the church and the world.

As head of a major Vatican department, particularly if it becomes a congregation, Bishop Farrell could become a cardinal in due course, though this is unlikely to happen at the next consistory.