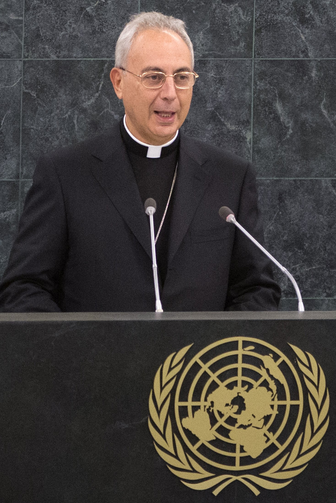 In a series of top level changes in the Roman Curia, Pope Francis has appointed the English-born Archbishop Paul Richard Gallagher as Secretary for Relations with States – the third highest position in the Vatican.

He succeeds the Moroccan-born Archbishop Dominque Mamberti who has held this post since 15 September 2006, whom the Pope has promoted to be Prefect of the Supreme Tribunal of the Apostolic Segnatura ( a position equivalent to that of a Chief Justice).

Mamberti, a civil and canon lawyer, succeeds the American Cardinal Raymond Leo Burke, who has served in that role since 27 June 2008 but was not confirmed in the post after completing the statutory five year term of office.  Cardinal Burke has been re-assigned to be Patron of the Sovereign Order of the Knights of Malta.

Archbishop Gallagher is the first Englishman ever to hold such a position, and comes to this important role – the equivalent to that of a Foreign Minister - with thirty years of distinguished experience in the diplomatic service of the Holy See, in a wide variety of situations on all continents

The sixty-year old friendly, astute and courageous Gallagher, whose motto is “Walk humbly with God”,  has served in the Holy See’s missions in Tanzania, Uruguay, the Philippines, as Observer at the European Parliament in Strasbourg, and then as nuncio to Burundi, Guatemala and Australia,  where he was at the time of his new appointment.

He knows the Secretariat of State well having worked in its Second Section, which manages relations with states, from 1995 to 2000.   In those years he worked alongside Pietro Parolin, now the Cardinal Secretary of State, so the two men know each other well. Gallagher is fluent in Italian, Spanish and French.

Born in Liverpool, 23 January 1954, he studied at the city’s Jesuit St Francis Xavier’s College. Earlier this year, he told the archdiocese of Melbourne’s Kairos Catholic Journal that he felt the call to the priesthood in his teenage years, inspired by the words of Jesus, “what greater love has a man than to give his life for his friends.” Then, he said, “I thought if I give my life to the priesthood, to the Church, I would be doing that as an act of love to my friends. That was really the roots of my becoming a priest.”

He contemplated joining the Jesuits or Benedictines, but settled for the diocesan priesthood after participating in a vocations program in the Liverpool archdiocese. He was sent to study for the priesthood at Rome’s Jesuit-run Gregorian University, while residing at the Venerable English College, and there obtained good degrees in philosophy, theology and – later- canon law. He was ordained priest for the archdiocese of Liverpool on 31 July 1977, and was then assigned to work in a parish at Fazackley.

Some years later, he was called back to Rome to study for the Holy See’s diplomatic service at the Pontifical Ecclesiastical Academy.  He became the first-ever English priest to graduate from that academy and rise through the ranks to become a nuncio (that is, ambassador of the Holy See).

He told Kairos Catholic Journal that he felt attracted to working in the diplomatic field of the Holy See “because I had always been interested in politics as a kid, so I thought maybe it could be something useful.”

After joining the Holy See’s diplomatic service on 1 May 1984, he was sent first to work in its diplomatic mission (nunciature) in Tanzania, and afterwards in Uruguay. He was subsequently assigned to the mission in Manila, the Philippines, and was there for the 1995 World Youth Day with John Paul II. Soon after, the Polish pope called Gallagher to the Vatican to work at the Secretariat of State, in the Section for Relations with States, then headed by the French Archbishop (now cardinal) Jean-Louis Tauran.

On 15 July 2000, John Paul II appointed him as Permanent Observer to the Council of Europe. There he succeeded the Irish-born Archbishop Michael Courtney who was sent as nuncio to Burundi, where he was assassinated in 2003. Gallagher also succeeded Courtney as nuncio in Burundi in 2004. That posting was a dangerous one as he sought to encourage the fragile peace process after a civil war that caused the death of some 300,000 people. During the last year of his service in Burundi rebel forces hit the nunciature by mistake when they opened fire on the nearby presidential palace; the shells caused damage to the building but fortunately no lives were lost.

Archbishop Gallagher was transferred from Burundi to Guatemala as nuncio in 2009, a country that was still recovering from one of Central America’s longest and bloodiest civil wars (1960-1996) that caused the deaths of more than 200,000 people – most of them indigenous people, and the disappearances of some 40-50,000 others, most of whom are still unaccounted for.

Thanks to the persistence of Church in Guatemala, and especially the work of the assassinated Bishop Juan Gerardi (1998) and human rights groups, with the help of the courts, the United Nations and the International Community in the Peace Process, the truth began to emerge, justice began to be implemented and peace was consolidated.  Archbishop Gallagher sought to support the unfolding of this important chapter in a land where there is still much poverty and insecurity.  He also sought to help the local church and population when natural disasters struck during his time there.

In late 2012, months before his resignation, Benedict XVI appointed Gallagher as nuncio to Australia, a religiously diverse country of over 22 million people, where. Christianity is the main religion and Roman Catholicism is the largest Christian denomination, with some 26% of the people declaring themselves Catholic.

The English-born nuncio arrived in Australia at a particularly delicate moment when the Catholic Church was once again under the public spotlight for the way it dealt with the sexual abuse of minors by priests in past decades.  Parliamentary inquiries were under way in the states of Victoria and New South Wales and a national Royal Commission would soon investigate how the various institutions in the country, both private and public, responded to allegations of child abuse.

“I expected a very enjoyable, stimulating, challenging mission, but one that was going to be overshadowed by the scandals of sexual abuse and the Royal Commission, and other inquiries like the Newcastle and Victorian parliamentary inquiries; and that has proven to be the case,” he told Kairos Journal last March.

Archbishop Gallagher arrived in Australia two weeks before Pope Francis was elected, but he has met the Argentine-born pontiff twice since then: first, at a gathering of all the nuncios in June 2013 and again when he came to the Vatican during his annual visit in November of that same year.

“Pope Francis has reinstated the practice of the Pope receiving the nuncios, which is very much appreciated by all the nuncios. We had a very wonderful exchange of 20-25 minutes. He was very spontaneous, very interested”, he told Kairos Journal.

He spoke about his visit with the Argentine-born pope as a very spiritual encounter. “Going to see Pope Francis is a bit like going to spiritual direction. I think he sees his role is to listen to you, understand the problems and maybe give some reactions, but also to encourage you. We certainly do feel encouraged by the time and attention he has given to us”, he stated.

As Secretary for Relations with States Archbishop Gallagher is head of the Second Section of the Secretariat of State.  He will work very closely with Pope Francis in relations with heads of government, and with relations, especially those of a diplomatic nature, with states and other subjects of public international law.

Show Comments (
2
)
Comments are automatically closed two weeks after an article's initial publication. See our comments policy for more.
REV JOHN HUGHES
6 years 2 months ago
Cardinal Burke's new appointment may be a blessing in disguise. He must still raise much money for the shrine he built in Wisconsin. And the Knights of Malta include major Catholic donors. But they are unlikely to happy about a Patron who makes speeches questioning the leadership of a reigning Pope. This could be a brake on Burke's ability to continue doing this in the future.
Thomas Farrelly
6 years 2 months ago
Can anyone explain precisely what the Cardinalis Patronus of the Knights of Malta does? Apparently he handles relations between the Knights and the Holy See. It would not appear to be an overly taxing position.