Next synod of bishops will focus on young people, the faith and the discernment of vocations. 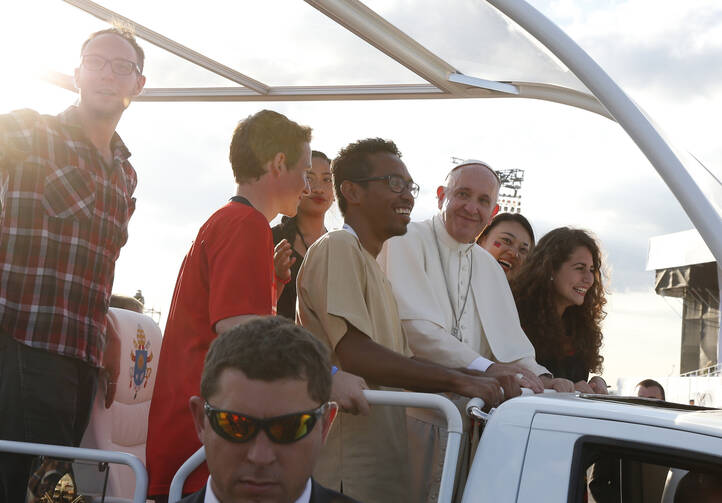 Pope Francis has decided that the next Synod of Bishops will be held in October 2018 and will focus on “young people, the faith and the discernment of vocations.”

In an announcement on Oct. 6, the Vatican said the theme is “an expression of the pastoral concern of the church for young people.” Moreover, it emphasized the fact that this theme is “in continuity” with what emerged in the two recent synods of bishops on the family (October 2014 and 2015) and with the contents of “The Joy of Love” (“Amoris Laetitia”), the apostolic exhortation written by Pope Francis as a conclusion to those assemblies.

The statement said the pope decided on this theme after wide consultation. He consulted the bishops’ conferences, the Oriental Catholic churches “sui juris” and the Union of Superiors Generals. He also listened to the suggestions of the fathers made at the end of the October 2015 synod on the family and the views expressed by the ordinary council of the synod that was elected to oversee the follow-up to that synod and to prepare for the next one.

The Vatican explained that this next synod “aims to accompany young people in their existential journey towards maturity so that, through a process of discernment, they may be able to discover their project (plan) for life and to realize it with joy, opening themselves to the encounter with God and with people and by participating actively in the building of the church and of society.”

In other words, the aim of the next synod is to discuss and find ways to help young people discern the particular vocation to which God is calling them in the church and in the wider world. It could be a vocation to the priesthood or to religious life, to marriage and the family and to the various forms of service in society.

This will be the 15th Ordinary Synod of Bishops since Paul VI in September 1965 announced his decision to establish the synod of bishops as the Second Vatican Council (1962-65) was in its final session. The previous synod on the family, the first convened by Pope Francis, was an extraordinary one and, for the first time, it was realized in two phases: October 2014 and 2015. The October 2018 synod, on the other hand, will be an ordinary one and will begin and end in the same month.

Since becoming pope, Francis has reached out to young people as was seen clearly at the World Youth Days in Rio de Janeiro 2013 and in Krakow 2016, and he has expressed considerable concern—as he did in “The Joy of Love”—that so many young people do not have work possibilities, are living in poverty, conflict situations or broken families. He is equally concerned that the church is not giving sufficient attention to the faith life of young people, or assisting them in discerning their vocation in life, and he is deeply aware of the lack of vocations not only in the church but also to service in other areas of life, including in the social, economic and political fields.

CORRECTION, Oct. 7: This report initially misstated the months when the Synod on the Family convened. The correct dates are October 2014 and 2015.

Gerard O’Connell
@gerryorome
Show Comments (
4
)
Comments are automatically closed two weeks after an article's initial publication. See our comments policy for more.
William Rydberg
5 years 8 months ago
According to Canon Law these Synods invoked by the Pope really don't have ecumenical force. Also, if future ones will be structured along the same format as the previous. They might consider sending in written submissions and donating the airfare, accommodation, meals and per deims to Papal Charities. It would likely be advisable if Pope Francis laid out where he wants to go beforehand. One keeps hearing semi-official word of "leaks" of private letters sent by the Pope to his old Archdiocese in Argentina. Leaks are not how Catholics are used to seeing Rome operate. In my opinion such practice of legislating by midnight leaks after a Synod is a real hit to the dignity of all participants, both men and women. The Bible verse is I believe: Matt 10:27 "....speak in the light...proclaim from the housetops." Although it (leaks of private Papal letters) may be a practice native to The Argentinian Church. But I am no expert on Latin America. in Christ, Lord bless Pope Francis...
Michael Barberi
5 years 8 months ago
I think a Synod on Young people (especially Millennials) is critically important to the future of our Church, and I applaud Pope Francis for calling for this Synod. I think we all can recognize the profound problems that this Synod will face. One problem is how to reach the young such as Millennials and not just those who attend weekly Mass (which only account for less than 20% of Millennials). Another problem is what "new" message or rationale will the bishops put forth to convince millennials about the Church's teachings on a host of moral issues they support in contradiction to the teachings of the magisterium? From many surveys a significant percent of them support: marriage equality (same-sex marriage), contraception, terminating a pregnancy for good reasons (such as to save the life of the mother), and changing the language and treatment of LGBT persons. It is clear that Amoris Laetitia (AL) did not adequately address these issues and some issues were left to the bishops to resolve, such as the language used and pastoral approach toward those born with a same-sex orientation. So far, the only issue we are witnessing being adequately addressed by the bishops is Holy Communion for the divorced and remarried. If the focus of this Synod is only on how young people can get involved in the Church and encourage them to attend weekly Mass, and not to adequately address the moral issues, then the success of this Synod will be questioned. I pray for its success.
Kevin Murphy
5 years 8 months ago
We tend to see the Church from our Western, somewhat fallen perspective. All you seek above is a Church that many in Africa and other non-Western cultures will never accept, nor will I. If Francis continues his effort to change the Faith via footnotes, airplane interviews, leaked documents and other duplicitous measures, the Church will schism. The last Synod was a failure and I've little hope for the next.
Crystal Watson
5 years 8 months ago
The synod on the family accomplished pretty much nothing. The response to the surveys taken before the synod were ignored. It seemed to be nothing but a PR moment for the pope. Will the next synod be any different?