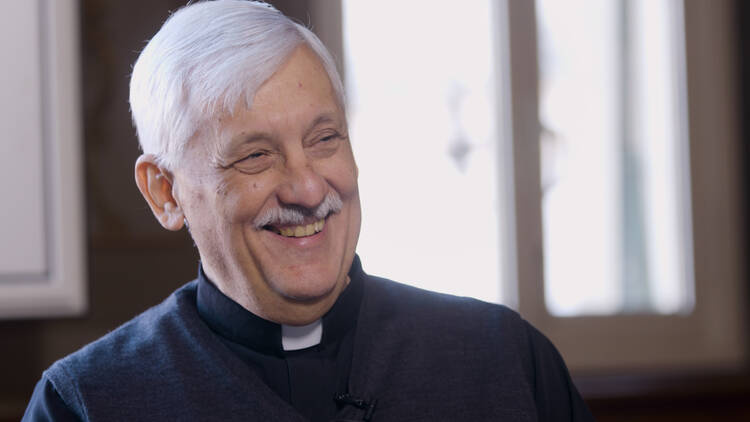 In a world of conflict, deeply in need of the mercy frequently implored by Pope Francis, Jesuits can be agents of reconciliation and dialogue, the society’s new superior general said in an exclusive interview with America.

Arturo Sosa, S.J., elected on Oct. 14 superior general for the Society of Jesus, told America’s Editor-in-Chief Matt Malone, S.J., that he believes the far-flung Jesuits can be models of the benefits of discernment, adaptability and “the very rich experience of…multiculturality” for the church and the world, especially in those regions of conflict where Jesuits are present.

He spoke with Father Malone in Rome on Nov. 28.

Father Sosa, born in Caracas, Venezuela in 1948, is the first Jesuit from Latin America to be elected into that usually lifetime role. His election comes as the church is experiencing its first Latin American pope. He suggests this historic moment represents an invitation “to see the Latin American church” and the progress it has made since Vatican II.

“Jorge Mario Bergoglio—Pope Francis—and myself, we’re sons of a church and a living church. The Latin American church has made a very nice process after Vatican II. We were formed in that process—the pope and myself—in different points in Latin America.”

A Jesuit pope creates special opportunities and connections for the society to be of service to the whole church, Father Sosa said, “because he knows and he practices very well the Ignatian spirituality. He talks all the time about that—about discernment, about consolation, about desolation, about reconciliation.”

“And also he is a person that is very committed to the Vatican II view of the church,” the father general added. “All the synodality—this is a co-responsibility.

“This is a man who understands very well the role of the religious life in the church. So for the society it’s really an opportunity to be used. The pope knows very well how he can use the Jesuits and the Society of Jesus in service of the church.”

On Nov. 26, just a few days before the two Jesuits spoke in Rome, a former superior general, Peter-Hans Kolvenbach, S.J., had passed away in Lebanon.

Father Kolvenbach had accepted the burden of leading the society during a time of strained relations with the pope. Father Sosa said he would be remembered for his openness for dialogue and his sensitivity during this difficult time. “He made this kind of tension between being in fidelity to the pope and being in fidelity to the discernment of the society about the mission of faith and justice.” He added that the late father general “opened the society to dialogue with all the cultures, especially the inter-religious dialogue…he was very aware of the importance [other traditions]—different from the Latin tradition—in the church.

“During his 25 years as general, the society became a real multicultural body of the church,” he said.

Father Sosa told Father Malone that after the shock of being elected superior general he quickly came to feel at peace with the decision of his brother Jesuits, partly because of his confidence in the system of discernment applied by Jesuits to the election.

“I don’t know if everyone knows, [but] the system the society uses for election of a general is a very peculiar one,” Father Sosa said. “It’s a time of praying, of discernment, of dialogue among the electors.” He described it as a deeply spiritual experience, of “being in the hands of God.”

“If we take seriously that the Spirit talks in the election…that gives me peace,” he said. “It was not my desire; it was not my plan; I didn’t want to do that. So it’s really like a call from the Spirit through my brothers, the society. So I suppose the same Spirit that made that movement and the brothers who put me here will help to move on in the society’s mission.”

He likened this experience of acceptance to the Ignatian sense of spiritual consolation.

“It’s not a superficial happiness. It’s a feeling that you are really in the hands of God and you want to do his will.”

Kevin Clarke
@clarkeatamericaclarke@americamagazine.org
Show Comments (
6
)
Comments are automatically closed two weeks after an article's initial publication. See our comments policy for more.
Kevin Murphy
5 years 1 month ago
This is not true for everyone. Pope Francis and many in the Jesuit Order have made me doubt my faith. I do not agree with his recent teachings on marriage and divorce. I am also dismayed by the actions and statements of his supporters, eg Spadaro. If two thousand years of teaching/tradition can be changed by one man, ie Francis, then all the moral teachings are subject to doubt, as well as my faith.
Jim MacGregor
5 years 1 month ago
RE: the comment - "... many in the Jesuit Order have made me doubt my faith", was not my experience as a HS and College student (and part-time employee of America). My experience was being challenged to question matters of faith and belief in order to understand them better and be able to explain them to others. My family members were often disturbed by my (as a HS student) asking them why they believed what they learned at church in their little suburban communities.
L J
5 years 1 month ago
How incredibly refrshing that Padre Sosa, like Padre Jorge Bergoglio, did not seek the office which was assigned to him. His comment, "it was not my desire; it was not my plan" are instructive. Contrast his attitude with Donald Trump, Hillary Clinton, Nancy Pelosi, Newt Gingrinch et al: ambition and power It should not surprise faithful Catholics why our nation is such a black abyss, like a roaring lion waiting to devour souls. Our leaders, a reflection of our national unregulated appetite, are us. May Pope Francis and Padre Sosa's gentle example of leadership permeate all Catholics, so as to move is to throw out all of the elected bums who have destroyed our nation
Kevin Murphy
5 years 1 month ago
I was referring to the current situation, ie Francis has legitimized, I believe, a teaching that opposes a direct instruction from Christ. No Pope can do so. I certainly have no problems with questioning one's faith. However, I believe many Jesuits are falling in line to support a position outside of the Faith.
Kevin Murphy
5 years 1 month ago
This better explains my thinking. https://www.thecatholicthing.org/2016/12/03/the-dangerous-road-of-papal-silence/
William Rydberg
5 years 1 month ago
Hate being a party-pooper, but should the Father General admit to actually aspiring to the job in order to "do the best I can in Christ" for my brothers; would disqualify him? Point is, the rule about disqualifying anybody that shows overt interest in the job is more of an affectation in my opinion. Remember that even the Gospel speaks of eternal Rewards. Even Christ did not deny his human nature-detesting the cross, according to St Paul. The Society of Jesus in my opinion ought to dump this rule as it only serves to promote dissimulation. in Christ, Fully God and Fully Man...