In New Interview, Pope Francis Says Resistance that Comes into the Open is 'A Good Sign' 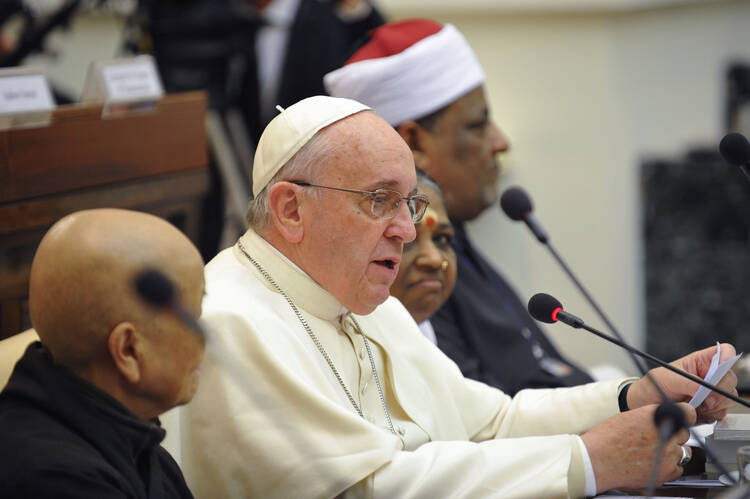 Immediately after his election on 13 March 2013, Pope Francis told himself, “Jorge, do not change, continue being yourself, because to change at your age would be ridiculous.”

He revealed this interesting personal detail in a wide-ranging exclusive interview with Elisabetta Piquè, for La Nacion, the main Argentine newspaper, published today, December 7  (cf links below). She is the paper’s correspondent in Italy, my wife, and author of Francis: Life and Revolution (Loyola Press).

He responded to her questions for some 50 minutes on such issues as the synod, the vexed question of the divorced and remarried, the reform of the Roman Curia, the resistance to him, the alleged sackings of Cardinal Raymond Burke and the head of the Swiss Guards, and new foreign trips.

Asked why he thought some sectors in the church feel disoriented and assert that today the church is like a ship without a rudder, especially after the recent synod, Francis questioned whether people had really said this. He suggested that part of the problem is that people don’t read what he has written: an encyclical together with Benedict XVI, homilies, declarations, and “The Joy of the Gospel.” He recalled that at the end of the synod his concluding speech was enthusiastically received by the bishops, and “that indicated that the problem was not with the Pope.”

When it was put to him that some, especially after the synod, fear that the traditional doctrine of the church will be demolished, Francis said “There are always fears, but because they don’t read the things (the texts), or (they) read news in a daily paper, an article. They do not read what the synod decided, what it published.” He listed three things which he said are “the definitive” result of the synod: “The post-synod (final) report, the post-synod message, and the speech of the Pope.” But even those will become relative he noted, because they will be “transformed into the guidelines” for the October 2015 synod.

Pope Francis pointed out that “nobody spoke about homosexual marriage in the synod, it didn’t occur to us. What we spoke about was how a family that has a homosexual son or daughter, how can they educate him/ her, how can they raise her/him, how can this family be helped to move forward in this situation which is a little unprecedented. So in the synod they spoke about the family and homosexual persons in relation to their families, because it is a reality that we encounter many times in the confessional”.  So the synod has to see “how to help this father or this mother who accompanies this son or daughter. That’s what was touched upon in the synod. For this reason someone spoke about positive elements in the first rough draft.   But that draft was relative.”

He said he is “not afraid” to follow this process of synodality, that is a journeying together, “because it is the journey that God asks of us. Furthermore, the pope is the guarantor; he is there to take care of this also. So it is necessary to carry on with this.”

The Jesuit pope recalled that in his final speech to the synod he drew attention to the fact that “no point of the doctrine of the Church on marriage has been touched.” And in the case of the divorced and remarried, he said, “We raised the question: ‘What can we do with them, what door can be opened? It was a pastoral concern: So will they get communion?“ But, Francis said, “It is not a solution if they go to communion. This alone is not a solution, the solution is integration. They are not excommunicated, that is true. But they cannot be godparents at baptism, they cannot read the readings in the mass, they cannot give communion, they cannot teach catechism, they cannot do some seven things. I have the list here. Stop! If I take account of this it seems they are excommunicated de-facto,” he remarked.

So the question is “to open the doors a little bit more,” he said. “Why can’t they be godparents?” He said people say no because they ask “what witness will they give to their godchild?” But it could be the witness of a man and a woman who say, “Look, I made a mistake, I slipped up on this point, but I believe the Lord loves me, I wish to follow God, sin does not conquer me, but I carry on.” Can there be more Christian witness than this? he asked. He compared such people to cases of “these corrupt, political fraudsters that we have” that “come to be a godparent and are married well in the church.” Would the church accept such a man? And what witness would he give to his godchild?   Francis concluded,  “we must change things a little” in terms of behavioral norms and values.

Some so-called "conservative" sectors charged that Francis had sacked Cardinal Raymond Burke, former head of the Vatican’s Supreme Tribunal, because he was leader of a group that resisted any kind of change at the synod on the family. He denied this interpretation. He explained that “Cardinal Burke asked me one day what he was to do since he had not been confirmed in his post in the juridical sector, and was there under the formula, "until otherwise provided for.” He said he told the cardinal then, “Give me some time because in the G9 they are thinking about a re-structuring of the juridical sectors.” Afterwards he said, “the (position) in the Order of Malta arose, and there was need for a smart American there who can move in that milieu and so I thought of him for that post. I proposed it to him much before the synod and I said, “This will be after the synod because I wish that you participate in the synod as head of the dicastery (Vatican office), because as chaplain of Malta you will not be able (to do so).”

He said the cardinal “thanked me much, in good terms and accepted it, so it seemed to me that he liked it. Since he is a man that moves (around) much, that travels, and here he will have work.  So it’s certain I did not sack him for how he had behaved in the synod.”

He also denied sacking the Commander of the Swiss Guards, Daniel Anrig, as the Italian and international media reported recently. He explained that Anrig’s term of office had actually ended two months after his election as pope but, not knowing the situation well, he asked him to stay on until further notice. Last July they agreed he would bow out at the end of the year, as it was time for a renewal. “He’s an excellent person, a very good Catholic, and a man who has an excellent family,” he added.

Many expected the reform of the Roman Curia to be completed in 2015, but Francis said no; that will not happen, because it’s a “slow” and “complex” process; that will take place "step by step." But, he added significantly: “It is the spiritual reform that concerns me most at this moment, the reform of the heart.”

He said the Institute for the Works of Religion (‘the Vatican Bank’) is working well now, as is the economic sector. He envisages that once the reform has been completed each of the Vatican congregations (including new ones such as those of Laity-Family, and Charity, Justice and Peace) will be headed by a cardinal because of his “closeness to the pope, as a collaborator in a given sector.” Significantly, however, Francis stated that “the Secretaries of these dicasteries (congregations) do not have to be bishops.”

All the recent popes have met with resistance at some stage, and now after 20 months, the resistance to Francis that was at first silent and underground has become more evident. Asked how he felt about this, he declared that he considers it “a good sign” that this resistance is ventilated openly, “that they do not speak behind the back when they do not agree. It is healthy to ventilate things, it is very healthy.” He thinks this resistance is linked to decisions he has taken, “decisions that have touched some economic interests, others more pastoral (ones).” But he’s not worried, “it would be abnormal if there were no diverging points of view.” As he moves ahead with the clean-up and reform he feels totally at peace, and remarked, “God is good to me, he has given me a healthy dose of unconsciousness.  I keep doing what I must do”

Questioned about his state of health Francis admitted, “I have my aches and pains, and at this age one feels them. But I am in the hands of God, and up to now I can keep up a rhythm of work that is more or less good.”

He will celebrate his 78th birthday on December 17, by having a meal with the employees at Santa Marta. But he revealed that last year it was the Almoner who actually invited the homeless men to breakfast on his birthday.  “It was a good deed”, but it created a legend he said: the truth is that he had breakfast with all the personnel of the Santa Marta Vatican guesthouse then, and the homeless men were among them.

Francis said he plans to go to some countries in Africa and three in Latin America in 2015, but not to Argentina – he might go there in 2016.

Speaking of Argentina, he explained that he would not be giving private audiences to politicians from his homeland in 2015 because he did not wish to interfere in the upcoming presidential elections there.

Asked for his reaction to the recent Pew Report that asserted that in spite of the ‘Francis effect’ Catholics are still leaving the Church in Latin America, he said the only data he had was from the meeting of the Latin American Bishops at Aparecida, Brazil (2007). He suggested that various factors could explain this exodus: external factors, such as people being attracted by “the theology of prosperity”, and internal factors, including the church’s “lack of closeness” to the people, and “clericalism” that prevents the laity from maturing.  But today, he said, Catholics “are called” to be close to people, to their problems and their real situations. He recalled that he had spoken about this in his programmatic document, “The Joy of the Gospel” and advocated that the church should be like “a field hospital,” that cares for and cures those who are wounded.

(NB: translation in this article is by the author).

The full interview, divided in blocks, can be found in Spanish and English by following the links below: