South African bishops respond to the pope's visit to America 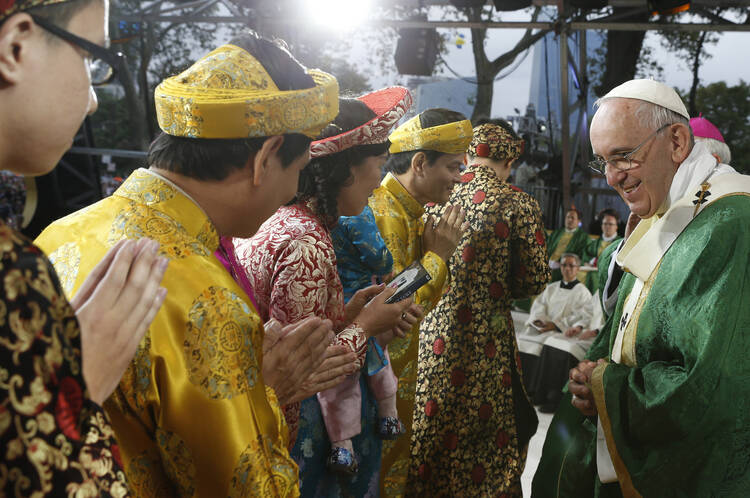 It has been fascinating to watch Pope Francis on his apostolic visit to America from a continent across the Atlantic, Africa. Many South African media outlets ran daily reports on the pope—this is unusual as the Catholic Church seldom features in South African media. Catholics too, who have access to satellite TV, sat glued as Francis smiled and waved at crowds, spoke forthright words in the political arena and did what has been a key theme of his papacy: reached out to the marginalized.

The pope’s visit struck cords in Africa on a number of levels. Some of the thorniest political debates in the United States are also difficult ones in Africa. Among these are migration, climate change, unfettered capitalism, capital punishment, religious freedom, same-sex marriage and abortion. South Africa, for example, has one of the most liberal constitutions in the world in which abortion is deemed a right. Same-sex marriage was legalised in the ‘Civil Unions Act’ in 2006. The Church has long struggled with government about these issues, to no avail, but sometimes at great cost to the image of the Church.

In many parts of Africa Catholicism is still meted out stringently by clergy and bishops (others might say "very conservatively.") The pope’s sentiments in the United States—advocating for “less harsh language” and a more open and welcoming church—resonates with many African Catholics. In some parts of the continent pastors are heavy handed when it comes to the reception of the sacraments. It is not uncommon to hear stories of, for example, the refusal to baptize a child born outside of marriage or the refusal to bury Catholics who have not attended Mass regularly. Some Catholics also feel that there is not much compassion shown when they seek annulments—they feel they are treated as "guilty" or "outcasts" and some wait for years before they receive an answer. Many African Catholics have opted for other faith communities because of some of these issues.

The president of the Southern African Catholic Bishops’ Conference and archbishop of Cape Town, Stephen Brislin, said that he believes that the Holy Father’s apostolic voyage to Cuba and the United States has inspired the African church in a number of ways. “His affirmation of the importance of family, essential for the well-being of society and the church, resonates with African culture and belief.” Brislin will be part of the Southern African delegation to the Synod of Bishops on the Family due to begin in Rome next week. “Pope Francis also challenges Africa by his emphasis on mercy and not ideology, he is calling us to return to the essence of the Gospel,” the archbishop said.

Bishop of Manzini, Swaziland, José Luis Ponce de Leon, said that he was struck by the pope’s great freedom in difficult situations. “This kind of freedom has made him talk with both words and actions,” he said. There has been a prolific rise in the number of Fundamentalist Christian Churches in Africa which advocate prosperity faith—the more you have the more you have been blessed by God. Some African Catholic hierarchy are not afraid of living lavish lifestyles.

Bishop Ponce de Leon said that people noticed the vehicle Francis was driven in while in the United States. “A layperson shared with me: 'My car is more expensive than the Pope's and I am not sure it is right…' I wonder how much his lifestyle and choices impact us?” the bishop mused.

Migration is a major issue on the African continent. Many people are fleeing countries like Eritrea, Sudan and Somalia in the north. In the south there has been a movement of people to countries like South Africa from places that are in political and economic decline—like Zimbabwe. Earlier this year widespread and brutal outbreaks of xenophobic violence shocked people around the world.

The South African government is currently changing border control policies, which is making entry into the country more difficult and has had a negative effect on tourism, the backbone of the country’s ailing economy. Archbishop Brislin said that the pope “pleaded for the plight of immigrants and voiced to the powerful the cry of those negatively affected by globalization. These are major issues on the continent.”

Africa is also  multi-religious, people of all faiths can be found across the continent. In some parts of Africa, like Nigeria, there is friction between Muslims and Christians. Archbishop Brislin believes that the pope’s visit to Ground Zero was significant for this reason too. “His respect for those of different faiths—most movingly seen at Ground Zero—encourages faith leaders in Africa, especially in places of religious conflict, to work in harmony for peace,” he said.

In many parts of Africa leadership is used as a way of promoting self-enrichment. “Many African leaders spend excessively on themselves—from the cars they drive to the houses they build," said Ranjeni Munusamy, political analyst and associate editor of South Africa’s premier online news platform Daily Maverick.

Munusamy believes that there is a growing disconnect between political and church leadership and ordinary people in Africa. “Pope Francis is exactly the opposite, he is a real servant leader who reaches out to ordinary people, and we saw this again and again while he was in the U.S.,” she said.

On the choice of Francis to go to Cuba before the United States, Ponce de Leon said he thought this too was important for Africa. “Putting those two countries together challenges all to become bridges in so many of our contexts where the one who does not think like us is an enemy...”

Bishop Ponce de Leon believes that the pope also taught lessons to evangelizers all over the world when he stood before Congress and the U.N. General Assembly. “He seemed to give a message from within and not from outside. He took the example of the lives of well-known American people, people who have marked their history—like Lincoln, King, Day and Merton—to underline some essential values for today. They were Catholics and non-Catholics in his audience, he had something for everyone.”

Munusamy hopes that the extensive coverage of the papal visit to the United States will also be significant for Africa by drumming up interest, excitement and support for his apostolic journey to the continent in November.

In America Francis was truly “the people’s pope,” reaching out to other parts of the world with his poignant words and actions. The excellent coverage of the visit meant that the lessons he taught in the U.S. did not remain there—they were shared. The challenges Pope Francis presented were not only for the leadership of the U.S. or the American church. They were for Africa; they were for humanity.