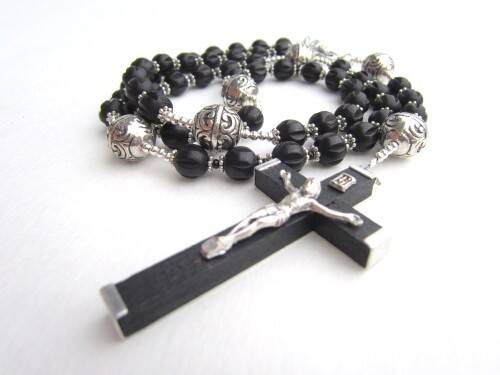 While the world’s attention was focused on the outbreak of deadly xenophobic attacks in South Africa another deplorable murder took place. Eighty-six-year-old Missionary Sister of the Precious Blood, Stefani Tiefenbacher, was allegedly gang raped and murdered in her bedroom. Police are waiting for the results of forensic tests to confirm that the sister was sexually assaulted. Other sisters discovered her body in the early hours of Sunday morning; she had been tied up with a typewriter cord and suffocated. She was found with a rosary twisted around her wrists.

Sr. Stefani had moved to the mission in the small town of Ixopo (southwest of the city of Durban) sixty years ago when she left her native Austria. Sacred Heart Home, where Sr. Stefani lived, was opened in 1923. A number of elderly sisters live in the house. They teach at the adjoining school and volunteer at a nearby hospital. The community is also the novitiate house of the congregation.

According to another sister in the community, Gerald Frye, the elderly nun had dedicated her life to the service of the poor. She was especially committed to helping impoverished children and worked in the mission school for forty years until 1992. Frye said that she had a very kind heart and was always willing to assist anybody. Sr. Stefani was part of an Education Outreach Programme for over twelve years. The Programme reaches out to children and adolescents from disadvantaged communities. This is the first incident of this nature in the mission’s 92-year history.

A close friend of Sr. Stefani, eighty-five-year-old Betty Firmstone, told the Daily News that she was shocked to hear of the murder. “I met sister in 1952, when I started teaching at the school attached to the mission. We worked very closely together. She loved her work with children” she said. “This really was an act of savagery against a gentle and caring soul.” Firmstone said that she could not comprehend how anyone could commit such atrocious acts against an elderly woman of God who posed no threat to anyone who had no worldly possessions.

Sr. Frye said that she woke up in the early hours of Sunday morning when she heard voices. The nuns had noticed Sr. Stefani’s door was ajar and called her by name. When she did not respond they went in and discovered her lifeless body.  The suspects ransacked the pantry taking fruit, alcohol and other groceries. It is believed that they accessed the premises of the mission by cutting a hole in the fence and entering through a side door one of the sisters forgot to lock. They also made off with about US$2,177.

Another sister, Christopher Kneringer, told the media how, the night before Sr. Stefani’s murder, they had all played cards together. “She loved her meals,” the sisters said. “She was very generous, she was ever ready to do something for someone else.”

Local police spokesperson, Major Thulani Zwane, said that the police had launched a manhunt for the killers and had appealed to the local community for any information that could lead them to the perpetrators.

Sr. Stefani is survived by her younger sister and brother in Austria, they have been notified of her death. Sr. Frye said that the convent has been inundated with calls from the Austrian media and distraught former students. She is the second religious women to be murdered in South Africa in the last year. Last year eighty-two-year-old Sr. Mary Paule Tacke was kidnapped and murdered in Mthatha on the East Coast of the country.