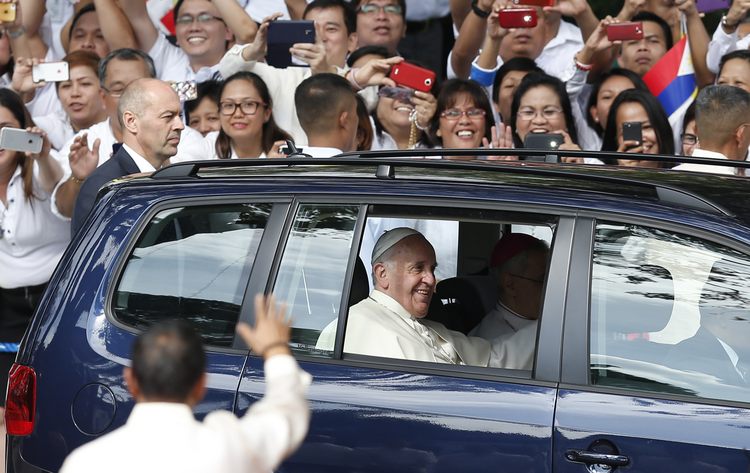 Manila came to a standstill Thursday evening, Jan. 15, as some two million people, young and old, ran out onto the streets and malls of this metropolis of 10 million inhabitants, singing and dancing, to welcome “Papa Francisco.” It was but the beginning of a four-day ‘fiesta’ for the Catholics of this land of 7,000 islands that count for 60 percent of the Catholics of Asia. The ‘fiesta’ is still continuing.

They had watched the joyful, smiling, humorous pope arrive at Villamor Air Base, Manila, at 5:40 p.m. aboard a Sri Lanka airlines flight from Colombo, and had seen one thousand young people explode in an amazing, dynamic artistic performance of dance and song as he stepped off the plane. And now they want to fete the first pope from the southern hemisphere as he visits this nation of 100 million, some 80 percent of them Catholic.

They have travelled to Manila from all parts of this multi-island country to see and to receive a blessing from “the Pope of the Poor.” They came out on the streets again on Friday morning, Jan. 16, to catch a glimpse of him as he drove in the popemobile to the cathedral to celebrate mass with more than 100 bishops and 1,000 priests from every diocese in the country. And they lined the 6km route that he took from the nunciature to "Mall of Asia Arena" that same afternoon for an inspiring and emotional meeting with families.

More than half a million people, are expected to attend his mass in Tacloban City in the island of Leyte, over an hour’s flight from Manila, when he goes there on Saturday morning, Jan. 17, to comfort and be with the survivors of the worst typhoon in the history of the Philippines, the Yolanda-Haiyan typhoon that brought such destruction in November, 2013, killing 6,000 and leaving more than 4 million homeless.

As many as six million are expected to gather here on Sunday, Jan. 18, for the mass Pope Francis will celebrate at Rizal Park; if the actual attendance matches the predictions it will surpass the World Youth Day gathering led by John Paul II in 1995, and will become the biggest crowd ever to attend a papal event, and may be even the biggest crowd in history at a single event. We will know if this happens in 48 hours.

Security is on maximum alert here in Manila for the papal visit. It was evident on the evening of his arrival, when accompanied by the charismatic Filipino cardinal ‘Chito’ Tagle, the Jesuit pope drove in an open popemobile from the airport to the nunciature. The authorities sealed off many streets near the papal route, installed iron barriers, and arranged a blanket police presence in all areas where the pope would go, involving 30-40,000 personnel. They also decreed a block on aviation until Monday morning, when Francis departs for Rome. Furthermore, they have imposed temporary blackouts on communications making it impossible for journalists, during those periods of blackout (often for several hours) to access the Internet, make phone calls, tweet or use other social media. This happened on Thursday evening when he arrived, and it happened again this Friday morning, Jan. 16, when he went to celebrate mass in the cathedral. It’s clear that the attack in Paris has had a big impact here, the authorities here are taking no chances.

Francis, for his part, was enjoying every minute of the journey as he drove from the airport to the city on that first evening, and today he clearly enjoyed the journeys to the cathedral and the “Mall of Asia Arena. He had been forewarned that he would be given a big welcome, but he could hardly have imagined that it would be of such dimensions. Even before his arrival here Francis had already reached the hearts of these Asian Catholics by his humility and his concern for the poor. His words and deeds during his first 24 hours here have endeared him even more to them.

One thing is already clear even at this early stage of his four-day visit: the Filipinos are celebrating his presence in a truly extraordinary way; they consider it a great blessing to have “the Pope of the Poor” among them, because so many of them – more than fifty percent of the nation - are poor and they see his great love for them and his desire to change their situation. They see him as the advocate of the poor.