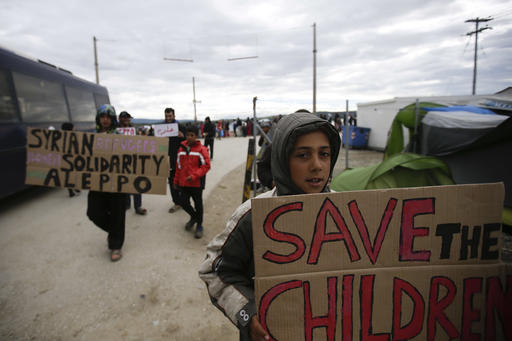 It was standing room only on May 2 at Westminster Cathedral on the feast of St. Joseph the Worker, for the annual Mass for Migrants, now a fixed event in the calendar for May Day Monday morning, a public holiday here as in much of Europe. This liturgical initiative involves all the Roman Catholic dioceses that converge on London—Westminster, Brentwood and Southwark. Each diocese takes its turn at hosting the Mass in its cathedral. This year it was Westminster’s turn, and the chief celebrant, the Archbishop of Westminster, Vincent Cardinal Nichols, led a capacity congregation in a colorful and vivacious, yet prayerful liturgy in our wonderful cathedral.

His hard-hitting homily provide great deal of encouragement to those many, Christians and others alike, who have been dismayed by the U.K. government’s poor treatment of refugees. Such dismay extends to a growing indifference to this crisis both on the part of governments and the governed. It’s probably a by-product of the media age; we’ve become saturated with the images and the information which, though comprehensive, come with an inbuilt anesthesia. The power of the pictures, some months ago, of the drowned infant in the Turkish coast did not lead to a massive outcry and has now faded. An awful tragedy appears to have occurred in the past two weeks, during night-time, at sea between Libya and Greece; patchily reported, this may have led to as many as 500 deaths.

In his homily, the cardinal both advocated for Europe’s refugee arrivals and spoke passionately about the contribution of migrants to this city in particular. Invoking St. Joseph, the “patron saint of those who work hard,” he demanded "a change of heart in our society, so that we begin by appreciating the great contribution made by so many migrant communities, without whom this city would not function." The cardinal called for prayer “earnestly for those who are in positions of authority and leadership that they will find the courage and imagination to respond more generously to those in need, speeding up our own resettlement program.

Noting that the scripture reading for the feast day, that mentioned the journey made by St. Paul and his companions from Troas to Neapolis, bore a “remarkable resonance” with the sea crossing so many make today, he called for a government and individual response based not on fear but on generosity. Memorably, Nichols noted that the “pathway of the spread of our Christian faith, then, is the same as one of the pathways followed by refugees and migrants today.”

Most recently, concern has grown about single, vulnerable refugee children as disturbing reports emerge about the numbers. Some reports suggest that almost 100,000 refugee children might be sleeping rough or living in makeshift camps where, very often, they will be in danger of abuse, trafficking and horrific forms of slavery. The U.K. government has just defeated a parliamentary proposal to accept 3,000 such children into the country although campaigners will present fresh proposals this week.

The May Day tradition of the Mass for Migrants on the Feast of St. Joseph the Worker began in 2006 and was the idea of the then archbishop, now emeritus, Cormac Cardinal Murphy-O'Connor. The feast itself was instituted in 1955 by Pius XII and draws attention to Catholic teaching on the dignity of work and the rights of labor. The initiative quickly gained the support of many Catholic organizations and schools and of the London Citizens grassroots activist group, whose membership includes many Catholics. At that first Mass, Murphy-O’Connor called for more just treatment of migrants, a call echoed in the “Strangers into Citizens” campaign, itself rooted in catholic social teaching with its constant reminder of the dignity of the human person. Ten years later the challenge is ever more acute and the need for solidarity with refugees and to challenge fearful xenophobia has become ever more urgent. The contribution of migrants to this world city’s culture, diversity and economy, not least in the N.H.S. (National Health Service), should be enough to contest fear and selfishness but events like the May Day Mass remind us all of the need for constant prayer accompanied by action and advocacy.