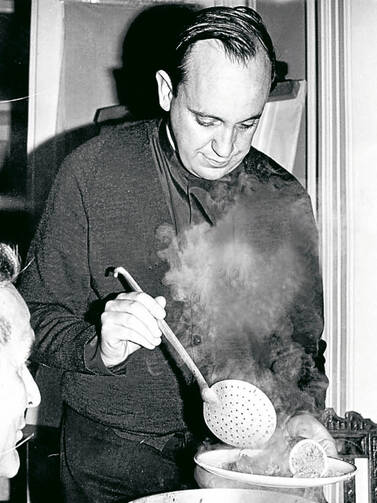 Horacio Verbitsky, the man who publicly and repeatedly accused Jorge Mario Bergoglio of complicity with Argentina’s military rulers when he was Provincial of the Jesuits in the second half of the 1970s, actually worked for the country’s military dictators from 1978 to 1981 and was on their payroll.

This is the explosive claim published today, May 18, in Argentina, in the blog www.plazademayo, under the headline “Verbitsky: Con Dios y Con el Diabolo” (“Verbitsky: With God and With the Devil”).

The article is written by two investigative reporters, Gabriel Levinas and Sergio Serrichio, who have spent more than 14 months researching the whole affair. It gives a preview of the book that will soon be published. In it, they draw on important documentary evidence which they discovered and on testimonies given by people who knew what actually happened.

In today’s article, they provide evidence which shows that Verbitsky, a former member of the Intelligence branch of the Monteneros—a left-wing armed guerilla group that carried out terrorist attacks in Buenos Aires in the mid-1970s—was one of the speech ‘ghost writers’ for the head of the country’s Military Junta, Brigadier Omar Domingo Rubens Graffigna. They claim that Verbitsky, along with Commodore Juan José Guiraldes and another collaborator named Pedrerol, wrote the speeches of the top commanders of the Armed Forces during the dictatorship.

They describe Guiraldes as "an organic intellectual" of the Armed Forces, who had influence with the junta’s leadership. And based on the testimony of three independent witnesses they claim that Guiraldes provided protection to Verbitsky in the weeks immediately after the military coup on 24 March 1976 at a ranch – the Estancia ‘La Santa Maria’, in San Antonio de Areco, near Buenos Aires. Guiraldes died in 2003.

The authors of the article reveal that at the end of April 2014, one of Guiraldes sons, found a 34 page manuscript at the ranch, in Verbitsky’s handwriting (as was subsequently confirmed by expert calligraphy tests). They say that various documents found there prove that Verbitsky signed a six-month contract on October 5, 1978, for which he received a monthly payment of 700,000 pesos. They also found evidence that he collaborated in writing a book for an institute of the Armed Forces that was published in May 1979 – “El Poder Aereo de los Argentinos.”

Later documents show that he signed a new contract in March 1981, and that his collaboration with the Armed Forces lasted at least four years, from 1978 to 1982.

The authors of the article say Verbitsky ended his collaboration with the Armed Forces immediately after Argentina’s military defeat in the Malvinas.  Later he began to appear in public as a reporter and, in the 1990s, went on to become an implacable denouncer of the violations of human rights committed during the years of the military dictatorship, and of the corruption that took place during President Carlos Menem’s administration.

In 2003, Verbitsky published the book “El Silencio” on the silence of the Catholic Church in Argentina during the years of military rule. In it, he accused Bergoglio of complicity with the military Junta when he was Provincial of the Jesuits in the country. In particular, he charged that by withdrawing his order’s protection from two fellow Jesuit priests—Orlando Yorio and Francisco Jalics—Bergoglio effectively gave the green light for their abduction by Navy officers in May 1976, after which the two were tortured. Bergoglio, then cardinal archbishop of Buenos Aires, denied this accusation as slander. In actual fact, the evidence available today shows that he not only managed to secure their release that same year, but also saved and helped very many people during the years of the military dictatorship.

Verbitsky, however, confirmed his allegations immediately after Bergoglio was elected pope on March 13, 2013, but this time leading Argentinean human rights activists, including the Nobel Peace Laureate, Adolfo Perez Esquivel, flatly denied the charges. Around that time too, an American journalist, Martin Edwin Andersen, a former friend of Verbitsky, claimed in an article that in actual fact Verbitsky had worked as “ghostwriter” for one of the military regime’s leading apologists, who praised him by name in the book mentioned earlier (“El Poder Aereo de los Argentinos”), for his indispensable collaboration in that work.

For more than a decade Verbitsky has been very close to the governments of both Nestor Kirchner and his wife, Cristina Fernandez, who is now President. He is currently head of the Center for Legal and Social Studies (CELS), an Argentine human-rights organization, and also writes for Pagina 12, a left-wing Argentine newspaper that is considered to be the mouthpiece of the government.

According to Levinas, one of the authors of today’s article, Verbitsky refused his requests for a face-to-face interview for the book, and would only answer some questions through his secretary by email.

The full text of the article (in Spanish) on Verbitsky can be found here: http://www.plazademayo.com/2015/05/verbitsky-con-dios-y-con-el-diablo/

Gerard O’Connell
@gerryorome
Show Comments (
2
)
Comments are automatically closed two weeks after an article's initial publication. See our comments policy for more.
Beth Cioffoletti
7 years 4 months ago
Because I am now reading Austen Ivereigh's biography of Francis ("The Great Reformer"), I can kind of follow this story. The claim that Verbitsky, himself, was in bed with military rulers while making a lot of money accusing Bergoglio of it is a sweet irony.
Betty Clermont
7 years 4 months ago
Bergoglio supporters have been hard at work trying to discredit Verbitsky because they can't discredit Emilio Mignone. His book "Church and the Dictatorship" published in 1986 first made the charge "that by withdrawing his order’s protection from two fellow Jesuit priests—Orlando Yorio and Francisco Jalics—Bergoglio effectively gave the green light for their abduction by Navy officers in May 1976, after which the two were tortured." Mignone was a leading Catholic layman and head of Catholic Action. His daughter, who was working with Yorio and Jalics, was "disappeared" the week before the two priests. After 10 years trying to find what and why happened to his child, Mignone reached the above conclusion. Yorio, Jalics (who never denied Bergoglio withdrew his protection) their siblings and other workers with Mignone, Yorio and Jalics all concur that this is the truth regardless of Bergoglio's denials.