I Could Feel the Pope’s Great Inner Peace 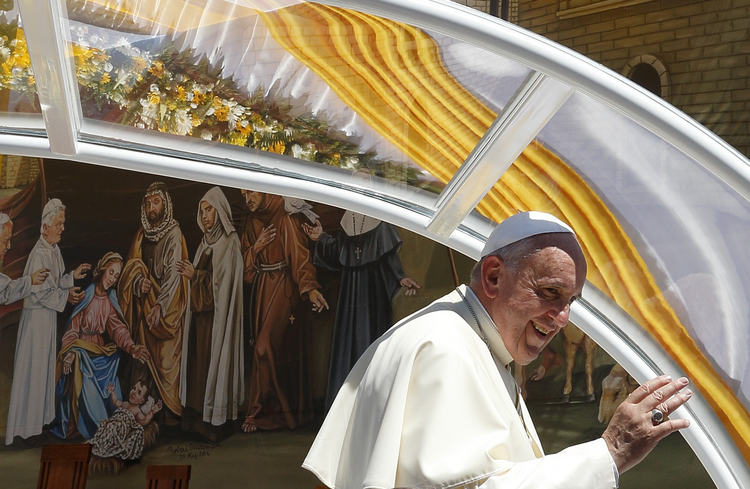 Last Thursday,  December 4, I had the great privilege to sit in on the interview that Pope Francis kindly granted to Elisabetta Piqué for Argentina’s La Nacion newspaper, for which she is the Rome correspondent.  She is also my wife and author of “Francis: Life and Revolution,” published by Loyola Press.

Pope Francis welcomed us with a big smile and immense graciousness, and then accompanied us into his 70 square-meter apartment on the second floor of the Vatican’s Santa Marta guesthouse that he has made his home. We sat on either side of him, and chatted a little before Elisabetta began with the questions she had carefully prepared.

As I listened in silence during the 50 minute interview and took a few photos, I was particularly touched when he revealed that immediately after being elected Pope at the age of 76, he told himself: “Jorge, do not change, continue being yourself, because to change at your age would be ridiculous.”

We have known him for many years and it was crystal clear during the interview that he has not changed; he remains the same very humble man he has always been, a man who never ceases to be “ordinary”, one who never puts himself above the other. It is this—what Elisabetta calls “the scandal of normality"—that makes him such an attractive person to countless millions across the globe.

Also as pope, he retains his great sense of humor. During the interview and our conversation he laughed and exuded joy and happiness. We have always felt happy after our meetings with him; it was no different this time.

One of the things that I’ve noticed most about him as pope, and also last Thursday, is his extraordinary inner peace. Over a year ago he revealed that he experienced this great inner peace descend on him at the time of his election, he considers it a gift from God; this peace has never left him since then. One feels this.

Another significant feature of this first Jesuit pope is that he is clearly a man of government. One could see during the interview that he not only possesses a global vision but also an extraordinary grasp of detail, and—we know—he’s a man who can take decisions, even hard ones, as he has done over these past 20 months. He’s aware of the problems, the wrongdoing, the scandals, the controversies, the resistance to him inside and outside the Vatican, but he’s not in the least disturbed or daunted by them. When Elisabetta asked him about this, he responded calmly with a smile: “God is good with me; he has given me a healthy dose of unconsciousness. I keep doing what I have to do.”

As the interview ranged from the local (the Vatican and Argentina) to the global, Francis was always at ease, ever in command of facts, details and plans. His realism shone through in his answers to her questions about Vatican reforms. But he’s under no illusion, he’s knows well that it’s one thing to change structures, it’s quite another to change attitudes and hearts: “It is the spiritual reform that concerns me most at this moment, the reform of the heart.”

His Jesuit training has taught him to try to see reality always from God’s perspective, to avoid being judgmental, and to look for the good in people and situations. This showed through clearly during the interview.

Over the years, I’ve come to understand that Cardinal Bergoglio, now Pope Francis, is a free man, a fearless man, one who’s not afraid to break with past ways of doing things so as to bring people closer to God. At last October’s synod on the family he encouraged the bishops to speak openly, honestly, with courage, but he also urged them to listen to what the Spirit is saying to the Church.

He explained all this in a succinct way in his answers to Elisabetta’s questions about the synod, and stated that even if some are afraid where this whole unscripted synod process might lead, he’s not:  “I am not afraid... I am not afraid because it is the journey that God asks of us. Furthermore, the Pope is the guarantor; he is there to take care of this also. So it is necessary to carry on with this.”

Some have suggested that the church is like a ship without a rudder today, but the interview shows clearly that Pope Francis is truly in charge. He's very conscious that he is the Successor of Peter. He’s happy and at peace in this role, knowing it’s where God wants him to be. He conveys a great sense of security, peace and joy. It’s what he conveyed on his recent trips to the Holy Land, Korea and Turkey. It’s what I felt too when we were with him.

Gerard O’Connell
@gerryorome
Show Comments (
2
)
Comments are automatically closed two weeks after an article's initial publication. See our comments policy for more.
Beth Cioffoletti
6 years 9 months ago
Thank you for this personal accounting, Gerard. It affirms what I, too, though half a world away, feel when I watch the videos of Francis' trips and daily Masses. Last year I had to have an emergency brain surgery. A couple of days before I was able to watch, live from the Vatican, the 4 or 5 hours of silent meditation that Francis had to pray for peace in Syria. He sat silently before the icon of the Salus Populi Romani, and I too could sit with him and feel the security, peace and joy.
Nancy Walton-House
6 years 9 months ago
Thank you for this story.