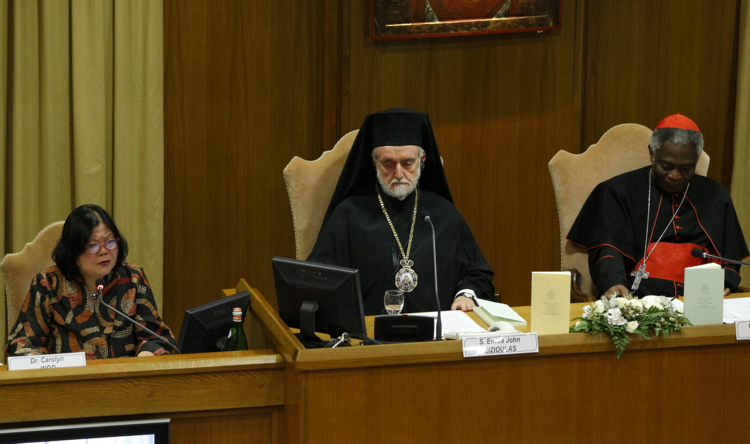 Never in the history of the Vatican has a senior leader of another Christian Church and an atheist scientist presented a papal encyclical. But that is what happened at Roman noon, June 18, when the Vatican released Pope Francis’ long awaited encyclical on “our common home,” at a press conference attended by several hundred people including cardinals and bishops, ambassadors from various countries (including the United States), reporters and TV crews from all continents.

Opening the event, Father Federico Lombardi S.J., the Director of the Holy See’s Press Office, told the gathering in the new Synod Hall, that never in his 25 years of service to the media in the Vatican had he seen so much global interest in any papal document. It was, he said, “a sign that there is immense interest in the encyclical worldwide because it is touching an issue that is of relevance to everyone.”

Cardinal Peter Turkson, President of the Pontifical Council for Justice and Peace, revealed that Francis had relied on “a wide range of contributions” in writing the text, among them Episcopal Conferences from all continents.

He recalled that St Francis of Assisi was “a source of inspiration” not only for the title of the encyclical but also for “the attitude of prayerful contemplation” that is a hallmark of this 183-page text. He is “the example par excellence of care for the vulnerable and of an integral ecology lived out joyfully and authentically” and “shows us just how inseparable the bond is between concern for nature, justice for the poor, commitment to society, and interior peace.”

He said Pope Francis invites us to listen to the cries of “the earth, mistreated” and of “the world’s forsaken and discarded” and urges every one – “individuals, families. Local communities, nations and the international community” – to an “ecological conversion,” that involves changing “direction” and “caring for our common home.” And he put the concept of “integral ecology” at the heart of the conversion process “as a paradigm able to articulate the fundamental relationships of the person with God, with him/herself, with other human beings, with creation.”

The cardinal recalled that Francis said “We are not faced with two separate crises, one environmental and the other social, but rather one complex crisis which is both social and environmental” and the “strategies for a solution demand an integrated approach to combating poverty, restoring dignity to the underprivileged, and at the same time protecting nature.”

Some in the United States have criticized Pope Francis for entering the field of science, but Turkson explained that the encyclical began with “a spiritual listening to the results of the best scientific research on environmental matters available today.” It does not aim to intervene in the scientific debated – that is the responsibility of scientists – much less to establish exactly in which ways the climate changes are a consequence of human action. In the perspective of the encyclical and of the church, the cardinal said “it is sufficient to say that human activity is one of the factors that explain climate change.” Once that is established then “we have a serious responsibility to do everything in our power to reduce our impact and avoid the negative effects on the environment and on the poor.”

The Ghanaian cardinal concluded by reminding his audience that “in its relationship with the environment, humanity is faced with a crucial challenge that requires the development of adequate policies which, moreover, are currently being discussed on the global agenda.” Certainly the encyclical “can and must have on important and urgent decisions to be made in this area,” he said, but “the magisterial, pastoral and spiritual dimensions of the document must not be put in second place. Its value, breadth and depth cannot be reduced to the mere scope of determining environmental policies.”

Metropolitan John of Pergamon, who represented the Ecumenical Patriarchate of Constantinople and the Orthodox Church, recalled that the Ecumenical Patriarchate “has been the first one in the Christian world to draw the attention of the world community to the seriousness of the ecological problem and the duty of the church to voice its concern and try to contribute with all the spiritual means at its disposal towards the protection of our natural environment.” In 1989, he said, Ecumenical Patriarch Dimitrios issued an encyclical in which he underlined “the seriousness of the ecological problem and its theological and spiritual dimensions.” Since then, Ecumenical Patriarch Bartholomew has, in various ways, continued promoting, “ecological consciousness” among Christians and more widely.

The Metropolitan then hailed Francis’ encyclical as “an occasion of great joy and satisfaction for the Orthodox,” and expressed “our deep gratitude” to him “for raising his authoritative voice to draw the attention of the world of the urgent need to protect God’s creation from the damage we humans inflict on it with our behavior to nature”

All who read it – he said - “will be impressed by the depth and the thoroughness with which the ecological problem is treated and its seriousness is brought out, together with concrete suggestions and proposals on how to act in order for face its consequences.”

The Metropolitan, who is the leading theologian in the Orthodox Church, noted that there’s “hardly any place for ecology” in the traditional manuals of theology and academic curricula of Catholic, Orthodox or Protestant schools. But the encyclical shows “the profound ecological implications of the Christian doctrine of creation.”

In the encyclical, he said, “the ecological crisis is essentially a spiritual problem.” Consequently, “the Church must introduce in its teaching about sin, the sin against the environment – ecological sin.” He noted that there’s also “a social dimension in ecology” which the encyclical brings out. That’s important because “the ecological crisis goes hand in hand with the spread of social injustice.” Ecological sin is a sin not only against God and our neighbor but also against future generations.

He recalled that way back in 1989, the Ecumenical Patriarchate decided to devote September 1 “to praying for the environment.” (They chose this day because it is the first day of the ecclesiastical year according to the Orthodox Liturgical Calendar.) He proposed that it could become “a date for such prayer for all Christians.”

In conclusion, Metropolitan John affirmed that the significance of Francis’s encyclical is not just limited to ecology, “I see in it an important ecumenical dimension in that it brings the divided Christians before a common task which they must face together.” Since the threat from the ecological crisis “is common to all of us regardless of our ecclesiastical or confessional identities,” therefore, “equally common must be our effort to prevent the catastrophic consequences of the present situation.” He said, the Pope’s encyclical is “is a call to unity – unity in prayer for the environment, in the same Gospel of creation, in the conversion of our hearts and our lifestyles to respect and love everyone and everything given to us by God. We are thankful for that”

He was followed by Professor Hans Schnellnhuber, founder of the Potsdam Institute for Climate Impact Research, advisor to the German Government and European Commission on climate change, who gave a fascinating power-point presentation showing global warming down the centuries, and especially since the Industrial Revolution in England.

Today, he said, “we are faced with the great challenge of limiting global warming to below 2 degrees Celsius, while fostering development for the poorest.”

He confirmed that “the urgency to act on these pressing issues that is expressed in the Encyclical mirrors the scientific findings which have accumulated into an overwhelming body of evidence.” And, he added, “If we fail to strongly reduce these emissions and to bend the warming curve, we our neighbors and children will be exposed to intolerable risks.”

He said “Pope Francis highlights the ethical dimension of the climate problem and provides fundamental principles to be applied for solutions: the preferential option for the poor, inter- and intra-generational justice, common but differentiated responsibility, orientation to the common good.” Moreover in the encyclical, he “argues for a global governance structure for the whole spectrum of the planetary commons.”

Dr. Carolyn Woo was the fourth speaker. She began by reporting that Catholic Relief Services (of which she is President and CEO) and the163 other members of Caritas Internationalis have been preparing for the past year to make the teaching of this encyclical known at grass roots level throughout the Church. A former Dean of Mendoza School of Business at Notre Dame University, she then went onto speak about the message of the encyclical for the business world. She said it affirms that business “is a noble vocation” and can be a source of prosperity “especially if it sees the creation of jobs as an essential part of its service to the common good.” She noted that Francis calls for an economy that favors “productive diversity and business creativity.”

Faced with the ecological crisis, she said the Pope calls for “ecological conversion” involving business as part of the solution. This means adopting “the virtues of solidarity and sustainability, oriented toward the common good and the true development of all peoples.” She noted that the encyclical says job creation is possibly the greatest responsibility entrusted to business. She said Francis speaks out against “the dangers of short-term thinking and a selfish mindset” and said that “to stop investing in people, in order to gain short-term financial gain, is bad business for society.” Dr. Woo added, “It is bad business for business too.” In line with the encyclical, she said businesses are realizing that they need to account for all costs involved in production, not just “a fraction of the costs involved.” She said the Pope is asking business to embrace the idea of “sustainable development” and added that “investing in sustainability is another ‘win-win’ opportunity for business.

Dr. Woo said business can play a role to assist customers to become responsible consumers. She said the Pope wants businesses not only to be ethical and practice sustainability but also to show authenticity, and he has indicated the need for “partnerships” between the public and private sectors, and emphasized that business must strive for human development and the common good.

At the end of the press conference, Valeria Martano from the Community of Sant Egidio, who teaches in the peripheries of Rome, spoke about the challenges for Christians posed by urban ecology, endangered by pollution, inadequate services and generalized individualism.

Links to texts of presentations: