High Level Launch for Pope’s Encyclical, in the Vatican, on June 18 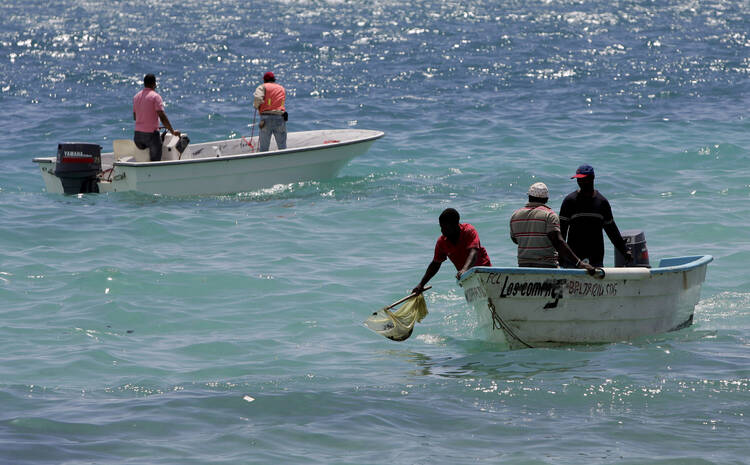 Pope Francis’ encyclical “‘Laudato Sii’—on the care of our common home” will be given a high-powered ecumenical and scientific launch on June 18, the Vatican announced today, indicating the utmost importance it attaches to this magisterial text that even before its release is attracting enormous interest worldwide.

Cardinal Peter Turkson, President of the Pontifical Council for Justice and Peace, will be one of three persons on the panel that present the text but, surprisingly, he is the only Vatican representative on it.  The other two panelists are big hitters: one from the Orthodox Church, the other from the world of Science respectively, Metropolitan John (Zizioulas) of Pergamon, and Professor John Schellnhuber, the founding Director of the Postdam Institute for Climate Change.

Sometimes in the past, a number of those on the panel presenting a major papal document have also been involved to some degree in its preparation. America has learned that this is indeed true in the case of this encyclical: all three panelists have made their particular contributions to the text that was written by Pope Francis.

On the flight from Colombo to Manila, the Argentine pope revealed that Cardinal Turkson “with his team” had played an important role, and actually made the first draft. It’s understood that the cardinal from Ghana and his team were also consulted subsequently. Moreover, Francis said Turkson had consulted some representatives of the other religions in the preparation for this encyclical, and some theologians did likewise. Cardinal Turkson has given some insights into the encyclical in recent talks.

Francis, last January, told the press that he had taken that first draft (prepared by Turkson and his team) “and worked on it and, then with some theologians, I made a third draft.”  He did not name any of the theologians that he had consulted, but it is now clear that Metropolitan John of Pergamon was one of them.  But Francis then did reveal that in preparing his encyclical he had read “many things” written by the Ecumenical Patriarch, Bartholomew 1, who for years has spoken about this subject.

The Jesuit Pope said he sent this third draft to the Congregation for the Doctrine of the Faith and to the Second Section of the Secretariat of State, as well as to the theologian of the Pontifical Household “so that they study it well, because I don’t want to say silly things.”  He received their “very constructive” feed-back in December 2014, and finished writing the text before the end of March.

Metropolitan John is recognized as the leading theologian of the Orthodox Church in the world today. He is President of the Commission of the Orthodox Church in dialogue with the Roman Catholic Church, and is also engaged in dialogue with the Protestant Churches.  This highly distinguished and esteemed Churchman is well known for his work on the environment, and in particular for his lecture series:  “Preserving God’s Creation.”

Up to now, neither the Pope nor the Vatican revealed the names of the scientists that have been consulted in preparation for this encyclical, but it is understood that several gave input through the Pontifical Academy of Sciences.  It is now clear, however, that Professor John Schellnhuber (Germany), the Director of the Potsdam Institute for Climate Impact Research which he founded in 1992, was one of them.  He is the third member of the panel that will present this important papal document.

Professor Schellnhuber holds a Chair in Theoretical Physics at Potsdam University and is an External Professor at the Santa Fe Institute (USA).  He served as Research Director of the Tyndall Centre in the UK (2001-2005) and became a Visiting Professor at Oxford University thereafter. He is currently Co-Chair of the German Advisory Council on Global Change (WBGU), Governing Board Chair of the Climate-KIC of the European Institute of Innovation and Technology (EIT) and Chair of the Standing Committee on Climate, Energy and Environment of the German National Academy of Sciences (Leopolinda).  He is an elected member of the Academia Europaea, the U.S. National Academy of Sciences (NAS) and the Max Planck Society.

Schellnhuber has been a long-standing member of the Intergovernmental Panel on Climate Change (IPCC) which was awarded the Nobel Peace Prize in 2007. He served as Chief Government Advisor on climate and related issues during the German G8/EU twin presidency in 2007 and has served as a principal advisor to the European Commission. He is a member of numerous national and international panels addressing scientific strategies and sustainability issues.

Given the enormous media interest in the encyclical, the Vatican has decided to hold the press conference for its release in the New Synod Hall in Vatican City at 11.00 a.m. on June 18.  The encyclical—whose title ‘Laudato Sii’ comes from St Francis of Assisi’s ‘Canticle of the Creatures”—will then be available in Italian, French, English, German, Spanish and Portuguese, but is likely to appear in other languages at a later date.

Gerard O’Connell
@gerryorome
Show Comments (
3
)
Comments are automatically closed two weeks after an article's initial publication. See our comments policy for more.
Luis Gutierrez
7 years 5 months ago
Hope the encyclical will clarify that the sacramental economy also entails a sacramental ecology. However, the moral authority of the message will be compromised given the Vatican continued resistance to reconsider the ordination of women; for the same patriarchal gender ideology that is at the root of the male-only priesthood is also at the root of much social and ecological injustice: A Sacramental Ecology for the Anthropocene http://www.pelicanweb.org/solisustv11n06page1.html#editorial Ordination of Women in the Sacramental Churches http://www.pelicanweb.org/solisustv11n06supp6.html#section9 Hope this will not be another debacle like Humanae Vitae, with abstract moral teaching handed down in a pastoral vacuum. Actually, since life is sacred *at each point* in time from conception to natural death, discerning the *vocation* of each baptized person is a crucial point on this path and requires the mediation of the Church, but should not be impeded by obstacles made by human hands such as patriarchal gender ideology. In both the domestic church and the hierarchical church, patriarchy is passing away. Hope the ecological crisis is an opportunity for the Church to lead by example and liberate herself from an inordinate attachment to male hegemony.
Chris NUNEZ
7 years 5 months ago
I'm sorry Luis Gutierrez, but your comment makes absolutely no sense to me. This is what inhibits the message of the Church from being comprehended by the public, and it is the public we want to communicate this message to -- not philosophy or theology professors. Can you rephrase this so that we grasp what it has to do with the Papal Encyclical? Please and thank you.
James Sullivan
7 years 5 months ago
Cannot wait till next Thursday! So we WILL get text of encyclical at 5am on June 18th NYC/East Coast time,no?