Gänswein: Pope Francis is Full of Surprises and Some Unpredictability

Gänswein: Pope Francis is Full of Surprises and Some Unpredictability 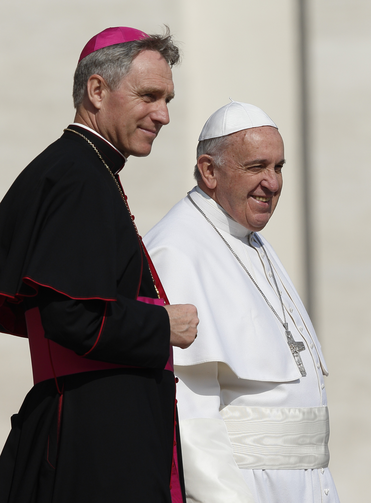 Pope Francis is “full of surprises” and Benedict XVI “follows his successor with great attention and sympathy. He admires his physical and spiritual strength. But he does not comment on his affirmations about having a short pontificate,” according to Archbishop Georg Gänswein, his private secretary.

In an exclusive interview with Elisabetta Piqué for La Nación, the main Argentine daily (links below), Gänswein, who is now Prefect of the Pontifical Household, said he has been “impressed” by Pope Francis in a number of ways:

He’s also impressed by “his particular gift for relating with persons. The word ‘encounter’, together with ‘mercy’, have become key words of the pontificate, and this is true for both ‘the great ones’ of this world as well as for ‘the little ones’, the differently-abled and the sick. It’s something that I admire and that inspires me.”

In this interesting and frank interview published in Buenos Aires today, March 21, Gänswein confessed that what he finds “a little difficult” is “a degree of unpredictability in his action, in the changes, in the surprises at the last moment that are never lacking.” He revealed that Francis “jokes about this when he speaks about Protocol and ‘the bureaucracy’ of the Vatican... but, joking aside, I think the Pope has experienced that the Protocol and all those who work in this sector do not seek to condition him in any way, (they only want) to serve and assist him in his Petrine service.”

When Piqué, (my wife and author of ‘Francis: Life and Revolution’), noted that some have criticized the Argentine pope for allegedly desacralizing the papacy by not living in the Apostolic Palace, of being a populist, and so on, Gänswein firmly dismissed such charges.

“Those criticisms are without foundation!” he stated. “Pope Francis does not go to the peripheries to receive applause; he doesn’t meet people in prison to increase his popularity. It’s ridiculous to think in that way. As for his style of life: I remember well that one of his first affirmations was: ‘I am 76 and I am not going to change my life’. It was and is that way. I see it every day.”

“Furthermore – he said - I consider it absurd to speak about a desacralizing of the figure of the Pontiff. Those who make these kinds of criticism have an unreal image of the papacy. It’s sufficient to observe the history of the popes and one sees many external changes, due to different reasons, but what remains identical and irreversible is the substance of the promise of the Lord to Peter.”

The 58-year old German archbishop continues to serve as private secretary to the-emeritus pope as he has since his election. In actual fact, he became private secretary to Cardinal Joseph Ratzinger in 2003, two years before he was elected pope. Then, two months before his resignation, Benedict XVI appointed him as Prefect of the Pontifical Household, the post he currently holds. In the interview he said he has adjusted, though not without some difficulty – particularly in the first months of the new pontificate - to “the personal style” of Francis which is quite different to that of his German predecessor, and to his new role serving both the new pope and the emeritus pope. But “with the passing of time I hope I have found a right way of relating to each of them.”

He recalled that Benedict XVI will celebrate his 88th birthday on April 16, and said that in spite of his age, “his head functions perfectly, but his legs have begun to create problems,” though he walks a little every day. He leads a life of prayer, reads a lot, deals with private correspondence and receives visitors.

Gänswein confirmed that Francis phones Benedict and they sometimes write to each other. He affirmed that “there is full continuity between them” as regards the process of cleaning up ‘the Vatican bank’ – properly known as the IOR (the Institute for the Works of Religion), and in dealing with the question of the sexual abuse of minors by priests.

The German prelate who has worked for twenty years in the Vatican expressed some unease at Francis’ pre-Christmas talk to the Roman Curia in which he identified 15 infirmities. “It was a discourse that surprised many, a strong talk. It offered an occasion to make an examination of conscience, and I did that. But I fear, in fact, that the words of the Pope could be manipulated against his closest collaborators: the good Pope, on the one hand, and the sick, corrupt Curia on the other. But where there is an illness, there is also an antidote.”

He also felt there was “too much talk” about the reform of the Roman Curia in the early part of the pontificate (when the group of Cardinal Advisors was brought in), without people properly knowing the Curia, “but that has lessened now, as have the expectations.” He doesn’t see resistance as such to what the Pope is doing, but rather ‘a more realistic vision of things.” At the same time, he detects some “unease” in the Curia about some of the things in the reform process. He noted that, so far, the only new reality is the Secretariat for the Economy and the Council for the Economy. And, he confessed that he was surprised when Francis called the Roman Curia ‘the last court in Europe’, when in fact there are still real courts in Spain, England, Denmark and Holland.

He confided that he has learned “something very important” from both Francis and Benedict: “the love for the Lord and for the Church.” As personal secretary to Benedict XVI, “I learned serenity in facing the daily challenges in a brave and sincere way, and to fear nobody and nothing.”

From Pope Francis, he said, “I am learning to look ahead, to open myself to new questions. The experience of the peripheries, which he loves to speak about, is something different with respect to the church experiences that we have in Germany, Italy and Europe.” Asked if this meant that the Vatican was too euro-centric, he conceded that “It could be,” and added, “It’s clear that the personal experiences of a Pope have much to do with his pontificate and with the governance of the Church.”

Links to the whole interview in Spanish: