The Fire This Time in Baltimore 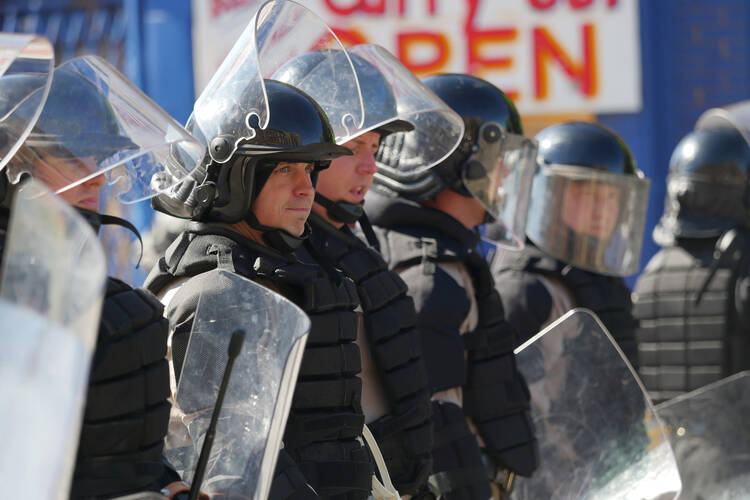 Another case of possible police brutality has led to civil disorder, this time in Baltimore, a city which has endured more than its fair share of economic and civic suffering in recent years already. Eight days after 25-year-old Freddie Gray died of a severed spinal cord while in police custody, and with no clear explanation of how this fatal injury occurred forthcoming, frustration boiled over in the streets of Baltimore following Gray's funeral yesterday afternoon and continued into the night.

Archbishop William Lori spent the morning touring some of the hardest hit communities of West Baltimore today. Yesterday in a statement released by the archdiocese, he pondered “a grieving community’s peaceful quest for answers and justice.”

“Our hearts cannot help but go out to the loved ones of Freddie Gray, whose pain and anguish we will share as they say their final farewells to a son, brother, nephew and cousin,” Lori said. “Freddie was not merely a symbol, but a real person whose life was tragically cut short. Sadly, it is a pain that far too many other Baltimore families have had to endure and will have to endure, so long as senseless violence and hatred continue.

The archbishop said that Gray’s death “symbolizes the rawest of open wounds and the only salve that will heal them is that of truth: truth about what happened to Freddie, truth about the sin of racism that is still present in our community, and truth about our collective responsibility to deal with those issues that undermine the human dignity of every citizen.”

He asked for prayers “for the people of our community, for those in law enforcement who approach their job with dignity and honesty and goodness, and for those investigating Freddie’s death, that their investigations will be swift, thorough, open, and honest, and that it will help our community to find ways to address systemic issues.”

Surely years of complacency around police misconduct and cover-ups for the same and unhealthy police-community relations contributed to the mayhem streamed into the U.S. cyber-consciousness from Baltimore last night. But while media anchors demand examinations of conscience for police and "thugs" tearing down other people's years of sacrifice—one victim of the chaos was a church-sponsored 60-apartment senior housing facility torched as it was under construction—it should not exempt itself from a self-examination of its own.

There has come to be something of the circling vulture syndrome among cable news services as they descend on cities like Ferguson or Baltimore when civic rage seems likely to boil-over; the coverage and the street chaos come to seem part of the same collaboration, a street art project of ritual civic catharsis composed in modern media. I find myself wondering about the effect of this focused attention on such potentially anarchic moments.

As a handful of vandals broke off from the main throng which had peacefully assembled yesterday, a different horde armed with cameras and iphones descended on the small group of teenagers as they set upon unprotected police cruisers, capturing still and video images that would soon make their way around the nation, the world and right back to the local social networks inhabited by these kids and their friends. Could there be a subtle goading at work when cameras light up the streets and the street performers begin?

Baltimore's disorder quickly became a Rorschach test for pundits, politicians and activists attempting to cable-splain how a city could break so bad so fast. Rand Paul blamed absentee fathers; for some the violence was the result of pure thuggery and poor parenting. Others saw the "uprising" as an inevitable, even welcome, expression of an oppressed community's justified rage.

One of the more original responses came from Baltimore Orioles executive John Angelos, son of owner Peter Angelos, who saw far more in Freddie Gray’s death and the chaos it provoked than another tawdry reaction to police malice and unprofessionalism. Angelos the younger cuts to the heart of the matter and attributes the anger and violence to the city’s long-term decline.

In a series of comments on his twitter feed, he wrote:

[M]y greater source of personal concern, outrage and sympathy beyond this particular case is focused neither upon one night’s property damage nor upon the acts, but is focused rather upon the past four-decade period during which an American political elite have shipped middle class and working class jobs away from Baltimore and cities and towns around the U.S. to third-world dictatorships like China and others, plunged tens of millions of good, hard-working Americans into economic devastation, and then followed that action around the nation by diminishing every American’s civil rights protections in order to control an unfairly impoverished population living under an ever-declining standard of living and suffering at the butt end of an ever-more militarized and aggressive surveillance state.

The innocent working families of all backgrounds whose lives and dreams have been cut short by excessive violence, surveillance, and other abuses of the Bill of Rights by government pay the true price, and ultimate price, and one that far exceeds the importances of any kids’ game played tonight, or ever, at Camden Yards. … there is a far bigger picture for poor Americans in Baltimore and everywhere who don’t have jobs and are losing economic civil and legal rights, and this makes inconvenience at a ballgame irrelevant in light of the needless suffering government is inflicting upon ordinary Americans.

Angelos' comments seek to tease out the underlying socio-economic frustrations in Baltimore that are propelling disorder beyond #blacklivesmatter fury. People with jobs don’t have the free time to devote their day to rioting. Post-industrial America has been allowed to molder: Camden, Baltimore, Troy, Youngstown, so many other rust belt cities and abandoned communities in what had been the textile-jobbed South. While politicians talk about the positives of free trade deals, after decades of NAFTA/CAFTA and China’s favored nation status, the results in devastated local economies, lack of decent-paying job and educational opportunity continue to grind down one-time working class cities like Baltimore. Sometimes people may be just looking for an excuse to rise up.

Police professionalism, tactics, training need improvement and a better-educated force that looks like the community it is policing will surely help, but police reforms alone will not be enough to resolve the complex of resentment and frustration in America’s fading urban zones. More attention must be focused on strategies for shaping an equitable post-industrial America that includes educational and job opportunities—and a reasonable expectancy of a dignified future—for all.

Kevin Clarke
@ClarkeAtAmericaclarke@americamedia.org
Show Comments (
3
)
Comments are automatically closed two weeks after an article's initial publication. See our comments policy for more.
John Placette
7 years 9 months ago
God calls us to personal responsibility. This article has the same tone exhibited by a lot of the media: "It isn't the the inner cities residents' fault. Businesses failed them. They had to become drug dealers to survive. If we dump enough money into the inner city, the residents will become model citizens." Nonsense.
Joseph J Dunn
7 years 9 months ago
Kevin Clarke lists a number of likely causes of the violence in Baltimore, and then gets to a deeper issue. “Angelos' comments seek to tease out the underlying socio-economic frustrations in Baltimore that are propelling disorder beyond #blacklivesmatter fury. People with jobs don’t have the free time to devote their day to rioting.” There is wisdom here. Baltimore’s unemployment rate is 8.7 percent, far above the national average and understandably a source of simmering frustration. Baltimore’s local leaders seem to understand that, and are taking steps to build a school system that effectively serves the people of Baltimore. Press Release, December 2014 http://www.baltimorecityschools.org/cms/lib/MD01001351/Centricity/domain/8049/2014-15/20141216-HighSchoolData-PressRelease.pdf. Elementary School Proficiencies http://www.baltimorecityschools.org/cms/lib/MD01001351/Centricity/Domain/8783/MSA%202014%20Math%20and%20Reading%20Summary_PUBLIC_PDF.pdf High School Statistics http://www.baltimorecityschools.org/cms/lib/MD01001351/Centricity/Domain/8783/Class%20of%202014%204YR%20Deck%20-%20for%20Communications.pdf. Even basic jobs, including but not limited to manufacturing, just above those minimum-wage-paying service jobs, require a level of reading and math proficiency. As the linked reports make clear, many of the 70 percent of Baltimore School District students who graduate high school within five years of starting still lack those basic proficiencies. The 30 percent of young people who do not graduate stand even less chance of finding gainful, satisfying employment. An education system that meets the needs of Baltimore’s young people would equip them for solid careers, and even for the possibility of starting their own businesses and advancing along the path that many others have followed to a solid income, informed and involved citizenship, and the freedom that comes with marketable skills. With the right education, a young man or woman can launch a business that employs many. Investment capital constantly seeks new business ideas. That can happen in Baltimore as well as in Austin, or Cupertino or anywhere else. Employers will open offices, research labs, and manufacturing plants where they can find employees with the requisite skills. Let’s encourage those education improvement initiatives.
Rory Connor
7 years 9 months ago
"The Fire This Time in Baltimore" indeed! Probably the biggest previous 'fire' was in Detroit in 1967. Coleman Young was elected Major in 1973 and later explained the impact of the '67 riots in his autobiography:The heaviest casualty, however, was the city. Detroit's losses went a hell of a lot deeper than the immediate toll of lives and buildings. The riot put Detroit on the fast track to economic desolation, mugging the city and making off with incalculable value in jobs, earnings taxes, corporate taxes, retail dollars, sales taxes, mortgages, interest, property taxes, development dollars, investment dollars, tourism dollars, and plain damn money. The money was carried out in the pockets of the businesses and the white people who fled as fast as they could. The white exodus from Detroit had been prodigiously steady prior to the riot, totally twenty-two thousand in 1966, but afterwards it was frantic. In 1967, with less than half the year remaining after the summer explosion—the outward population migration reached sixty-seven thousand. In 1968 the figure hit eighty-thousand, followed by forty-six thousand in 1969.That was quite a price to pay for any injustices experienced by black citizens of Detroit a half century ago. Did the rioters IMPROVE their lot - or make more things a great deal worse? Because a similar question needs to be asked about Baltimore today, and my guess is that the answer will be the same this time around also!