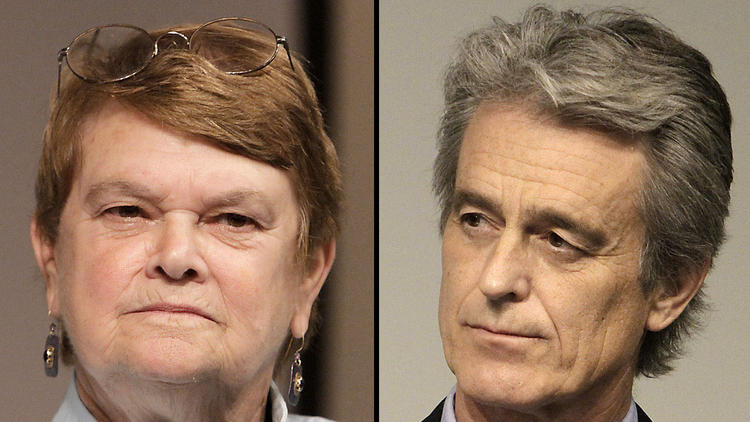 Tomorrow the biggest (and perhaps most difficult) election in Los Angeles is between two Catholic Democrats, as Sheila Kuehl, 73, vies against Bobby Shriver, 60, for the open seat on the L.A. County Board of Supervisors.

Both Kuehl and Shriver were raised Roman Catholic (though Kuehl, having had a Jewish mother, notes she has attended “way more Friday night services”). And both have a history of attending to the needs of those on the margins that would make any Catholic or Jew proud. In his lifetime Shriver has built a number of major organizations whose purpose is to help bring equality and justice to Africa via measures like debt relief, AIDS relief and malaria and tuberculosis immunizations; as a candidate for the open Board seat he’s pushing for more housing for the homeless in general and homeless veterans in particular.

Kuehl was the first openly gay member of the California state legislature, and served for a time as the Senate’s chair of Health and Human Services Committee. In 2004 she wrote the legislation that protects Californians from hate crimes.

What makes the election so significant is the office for which they contend. The L.A. County Board of Supervisors consists of five elected officials, each of whom represents a whopping two million people in the city of Los Angeles. (At ten million, the overall population of Los Angeles is bigger than 43 of the states.)

With a budget of 26 billion dollars (likewise more than that of half the states), one hundred thousand employees and oversight of the County hospital system, sheriff’s department, public libraries, foster care system, homeless services, this small group of individuals exercise incredible authority both to set policy and to see it enacted. In the entire country, you’d be hard pressed to name a group of similar size that wields this kind of power.

As always, the issues facing Los Angeles are significant. In the spring a Blue Ribbon Commission declared the foster care system here in a state of emergency. Likewise, federal courts have demanded that the city and county clean up its water supply, after studies have found that up to five hundred thousand people get sick every year from swimming at area beaches.

Los Angeles also has more renters than anywhere else in the country, and at the same time the worst rents in the United States—one third of the population spends more than half of their income on rent. And while public transportation is growing fast, with new subway lines extending to the West Side and hopefully soon from LAX to the San Fernando Valley, it remains for now a significant issue.

But what truly makes this election so difficult is not the issues so much as the fact that both candidates seem so qualified. Both went to Ivy League law schools (Harvard and Yale); both have legislative experience, Shriver as councilman and for a short time as mayor of the city of Santa Monica and Kuehl in the state government. And when it comes to interesting qualities, well, Shriver is the brother of Maria Shriver and the nephew of John F. Kennedy; and Kuehl was a regular on "The Many Loves of Dobey Gillis."

The unions are backing Kuehl; the LA Area Chamber of Commerce Shriver. Some here bemoan the fact that they can’t elect both. (Shriver himself thinks there should be more Supervisors.)

Looking at the job of Supervisor, Shriver has said, “I think the values that come out of the Jewish and Christian faith are reflected in much of the work the county does. As Supervisor you have to look after the needs of foster children, deal with a crisis in the community or working out the needs of social workers. Another part of the job is looking after the mentally ill, looking after people who are suffering, or who have suffered from mental illness, and these are things that our faith empowers us to do.”

Kuehl for her part is inspired by J.R.R. Tolkien’s Catholic-infused Lord of the Rings trilogy: “It is the story of a quest that ultimately saves the world, but [is] undertaken by ordinary people who don’t ask for the task, but take it on when it comes to them, and act heroically.”

At this point it’s hard to call either Shriver or Kuehl “ordinary,” but they certainly seem up to the task.

Show Comments (
1
)
Comments are automatically closed two weeks after an article's initial publication. See our comments policy for more.
Bob Baker
6 years 4 months ago
Kuehl also helped, "establish the rights contained in Roe vs. Wade in California statute" according to her own campaign website. She also, "consulted with Planned Parenthood and others on a variety of public policy issues" and taught at LMU. Most people won't drool over either Kuehl or Shriver, as the article does. Most didn't have the money to go to Harvard and Yale and weren't born into rich families, either. Obviously the author also forgot that Catholics are against abortion, too.