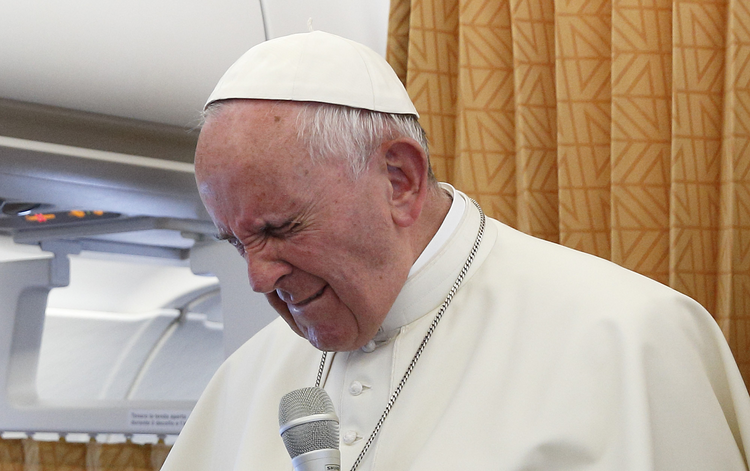 The fallout continued this week following the pope’s suggestion that the church should apologize to gay and lesbian people during his flight home from Armenia on June 26. (In fairness, Pope Francis also said an apology was due from the church “to the poor, to exploited women, to children exploited for labor…for having blessed many weapons.”)

In a development which may be related, on June 29 Bishop Bernard Fellay, superior general of the Society of St. Pius, which broke away from the church following Vatican II, firmly squashed suggestions that the society was considering a rapprochement with Rome. In a communique released by the society, he said it would abandon any further dialogue with Rome, noting continuing doctrinal error that the society could not overlook and complaining that Pope Francis was sowing too much confusion in the church.

But not everyone is confused. The pope’s call for Christians to offer an apology to gay and lesbian people was also carefully welcomed this week by Bishop Robert McElroy of San Diego. “I think it opens up a very helpful pathway to dialogue and hopefully healing,” he said. Pope Francis, Bishop McElroy said, brings to this dialogue with L.G.B.T. Catholics who feel marginalized by or alienated from the church a “renewed and deepened focus on the questions of accompaniment and the mercy of God for all of us.”

“We all walk together in a life of virtue and discipleship,” Bishop McElroy said, “and all of us fail at times.”

He adds: “We have to begin to incorporate that mercy into the depths of our hearts and souls in ways that are going to be uncomfortable for us…. We all need to be shown mercy; it is something that binds us together, not differentiates us.”

“What we need to project in the life of the church is ‘You are part of us and we are part of you.’ [L.G.B.T. Catholics] are part of our families.”

In the past, he argues, diocesan and parish leaders have struggled with two tendencies regarding L.G.B.T. people: “whether you had to sacrifice fidelity to the teaching of the church or sacrifice effective outreach to the L.G.B.T. community.”

“My own view,” the bishop said, “is that much of the destructive attitude of many Catholics to the gay and lesbian community is motivated by a failure to comprehend the totality of the church’s teaching on homosexuality.”

That teaching includes the conviction that “moral sexual activity only takes place within the context of marriage between a man and a woman.”

But “that’s not a teaching which applies just to gay men,” Bishop McElroy said. “It is teaching across the board and there is massive failure on that.”

Bishop McElroy argues that all Christians are called to a life of virtue, in emulation of Christ. Chastity is among the virtues of that life—others include self-sacrifice, service and piety—and it is an important one, “but it does not have the uniquely preeminent role in determining the character of a disciple of Christ nor one’s relationship with the church” that some may believe, according to Bishop McElroy.

Finally, and most poignantly in light of the recent attack in Orlando on a gay nightclub that claimed 49 lives, the totality of the church’s teaching includes the understanding that all Christians are “called to build a society in which people are not victimized or violence visited upon them or unjustly discriminated against because of their sexual orientation.”

The bishop noted “a human but destructive tendency to exclude and label people as the ‘other,’ but the accompaniment that Pope Francis teaches points away from that” in a manner that can help root out violence and unjust discrimination against L.G.B.T. people. Bishop McElroy adds, “In fairness Pope John Paul II reiterated this many, many times.”

The bishop appreciates the notion of an apology as an opportunity “to try to really create an understanding and a reality in the life of the church that members of the [L.G.B.T.] community are welcome, and genuinely so.”

A practical step toward the apology by the pope, Bishop McElroy thought, might be a re-evaluation of the language the church uses in even talking about L.G.B.T. Catholics. “We are not talking about some group or person who is the ‘other,’ he said. “It has to be language that is inclusive, embracing, it has to be pastoral.”

While The Catechism of the Catholic Church on homosexuality and other teaching on pastoral care for L.G.B.T. Catholics deplores violence or unjust discrimination against people who are gay or lesbian, it also describes homosexual acts as “intrinsically disordered.”

Bishop McElroy thinks that phrasing ought to be carefully reconsidered. “The word ‘disordered’ to most people is a psychological term,” he explains. “In Catholic moral theology it is a philosophical term that is automatically misunderstood in our society as a psychological judgment.” He thought the term evidence of “very destructive language that I think we should not use pastorally.”

Another relatively easy step for most dioceses to take by way of institutional apology would be “to seek to collaborate with those in society who are working to banish discrimination and violence leveled against people because of their sexual orientation.”

He added, “The church has already been doing that, but we have to step it up.”

Some church leaders may worry that the pope in his recent comments on outreach and apology to gay and lesbian Catholics may be moving too quickly, too far ahead of his flock. Bishop McElroy is not so sure, noting the many Catholic families he has met with have been longing to hear something positive about the church and its pastoral relationship with L.G.B.T. Catholics. “When I go out and meet with laypeople,” he said, “so many of them have family members, brother and sisters and sons and daughters, mothers and fathers who are gay or lesbian.

“For them it is a great and painful thing to feel excluded from the life of the church, and for that element…we are not moving fast enough.”