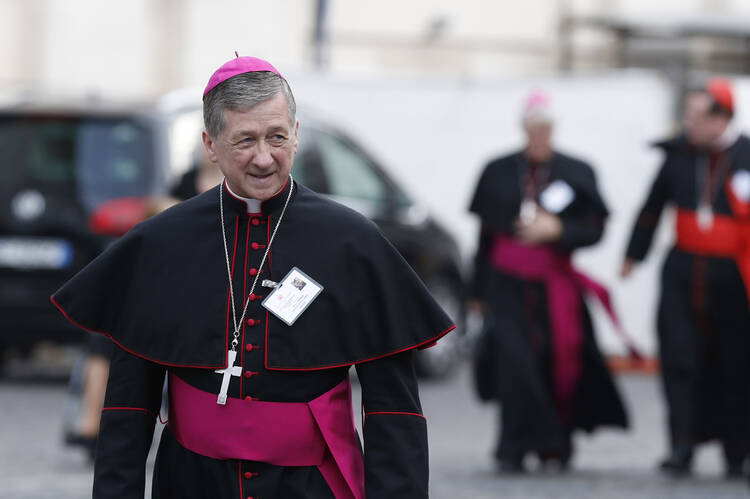 “I think the greatest contribution that the bishops can make to families, is to act and speak like families. I think that that is a very key thing, and I find that happening,” Archbishop Blase Cupich told reporters at a press briefing on the synod, in the Vatican, on Oct. 16.

He recalled how some years ago his mother, who gave birth to nine children, was asked by somebody: “Do you love one of your children more than the rest of them?” Her answer was simple: “Only if they need it!”

“That’s the way families speak; that’s the way a mother talks. We have to be able to speak that way too,” the archbishop of Chicago said, referring to how the church and her pastors should respond as they seek ways to integrate divorced and remarried people, and other marginalized persons into the life of the church.

Cupich, who is attending his first synod at the Pope’s invitation, said all this in response to a question as to what stage the synod has reached on the controversial question of whether the divorced and remarried may be allowed to receive the Eucharist.

“I think people have stated their positions,” he said. German Cardinal Walter Kasper presented a proposal last year within a theology of the family, he recalled. The German bishops have made their own proposal as has Archbishop Roberto Gonzales (Puerto Rico) with regard to a penitential pathway of moving forwards. Other synod fathers “feel” the doctrine of the church is already clear cut. But the synod discussion has not ended yet, and it’s not clear if the Holy Father will follow up with an Apostolic Exhortation, as has happened in the past.

“Maybe we are not going to come out with the sharp, clear answers that you in the media would like to have in order to write nice stories, but I do think I’m seeing real transformation happening in the [synod] hall with people,” Cupich said.

He recalled that “one of the participants said he felt like one of the three kings, he’s going to go back home by a different way. And I think that is true for all of us.” Cupich believes the synod will have been a success if this indeed has been the impact on participants.

Asked about proposals at the synod to give greater authority to the national bishops’ conferences to deal with questions such as those relating to the divorced and remarried couples, gay couples and so on, Cupich said he needed “to give a little more thought” to this proposal, “because as a diocesan bishops I would like to be sure that what I do is in conformity not just with my particular inclination but with the universal church” while recognizing his own diocese has “specific needs.”

While not wishing “to create national churches,” the archbishop recalled that already “we do have particular law for national churches already. “ The U.S. church, for example, has national norms for the protection of children, approved by the Holy See.

He thinks bishops’ conferences can have a role or function regarding the questions mentioned above but, he said “we have to be careful that we don’t make policy on very sensitive issues on a national level, but we do it in conformity with the church universal and give respectful autonomy to the diocesan bishop.”

In seeking to address questions such as that of the divorced and remarried, Cupich advocated going back again “to what the church teaches regarding considering things on a case by case basis.” He recalled that the International Theological Commission’s document on the ‘Natural Law’ (2009) states clearly that “in morality, pure deduction by syllogism is not adequate. The more the moralist encounters concrete situations, the more he must have recourse to the wisdom of experience, an experience that integrates the contribution of other sciences and is nourished by contact with men and women engaged in the action.”

Cupich acknowledged that “syllogisms are important, general principles are important, but there’s a limitation on how that allows us to address real life situations.” In dealing with “the delicate questions,” he said he wants “to make sure that the full breadth of what the church teaches is brought to bear.”

“We can’t just refer to doctrines as though they are syllogisms from which we deduce a conclusion to. There has to be that integration of a person’s circumstances, case by case in their life,” he stated.

In counselling people, the Chicago archbishop said he has “always tried in some way to try to understand them.” And since "reconciliation" entails forgiveness and “seeing eye-to-eye with people," he said, “I try to understand them, but I also have to see how they understand me.” He tries to help people along the way “and people come to a decision in good conscience.”  He emphasized that as pastors “our job in the church is to help them move forward and to respect that. Conscience is inviolable. You have to respect that when they make decisions and I have always done that.”

Asked if he would apply this same approach regarding conscience when accompanying homosexuals, Cupich responded, “Gay people are human beings too. They have a conscience. My role as a pastor is to help them discern what the will of God is by helping them look at the objective moral teaching of the church and yet, at the same time, helping bring them through a period of discernment to understand what God is calling them to at that point."

This approach “is for everybody,” he stated. “I think we have to make sure that we don’t exclude one group as though they are not part of the human family, and so there is a different set of rules for that.  That I think would be a big mistake.”

From his own experience, he’s understood that “people go through phases in their life” and “so we have to be patient and available to them, always be present for them, and look for ways to accompany them.”

If pastors “are going to really accompany people we have to first of all engage them,” he said. In Chicago, he visits regularly with people who feel marginalized, whether they are the elderly, the divorced and remarried, gay and lesbian individuals and also couples. “I think we really need to know what their lives are like if we wish to accompany them.”

He highlighted the fact that at the synod “the three words, accompaniment, reconciliation and integration continue to be repeated” and so, he said, “we have to look for a way in which those three words are going to be the template for us to continue a discussion for all of those people, whether they are folks who are divorced and remarried, or gay, or other people who feel disenfranchised in one way or another.”

In line with Pope Francis’ thinking, Cupich insisted above all that “we have to believe in the grace and the mercy of God to trigger conversion, rather than having it the other way round: you only get the mercy if you have the conversion.” He recalled that in the Scriptures, “Christ receives people, and it’s because of that mercy that conversion happens many, many times.”

In this context he told the story of a priest who was doing a funeral for a young man who had committed suicide, in his twenties. The man’s mother, who was divorced, remarried and very angry at the church and at God for the death of her son, came up at communion time to receive a blessing, but the pastor said to her, “No, today you have to receive.” She went back to her pew and wept uncontrollably. Later she came back to visit with the priest and began reconciliation. “Her heart was changed.” Eventually she had her first marriage annulled and now her marriage is in the church. Cupich asserted that all this happened because “the priest looked for mercy and grace to touch her heart.”

Gerard O’Connell
@gerryorome
Show Comments (
1
)
Comments are automatically closed two weeks after an article's initial publication. See our comments policy for more.
Robert Killoren
6 years 11 months ago
This is a picture of how things could be. Amazing conversions have happened when one receives the Eucharist. Also, I feel mercy is not something to be earned but freely received. I certainly do not deserve heaven, but through the mercy of God I might be allowed to enter despite my failures.