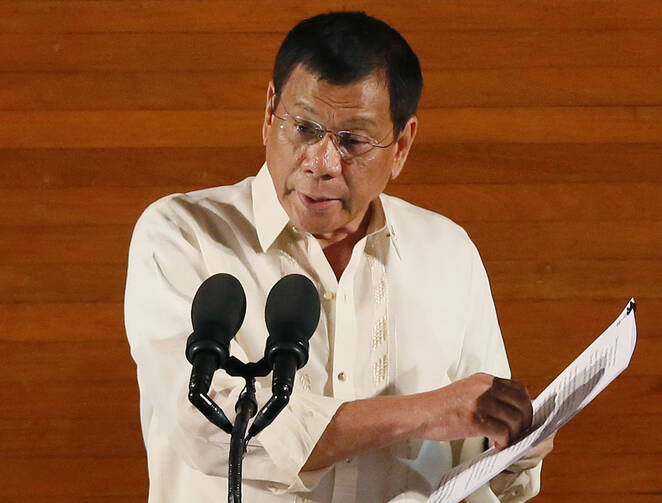 Deploring a campaign of extrajudicial killings that by some local media accounts has now claimed more than 800 lives, the president of the Philippines bishops’ conference issued a direct challenge to President Rodrigo Duterte and his supporters in his Sunday homily on Aug. 7. “Will you kill me again and again on the social media for saying this?” asked Archbishop Socrates Villegas of Lingayen-Dagupan.

“At this point. I do not care. I am ready to die.… A part of me has died a hundred times in every killing I have seen these past weeks. What is another death for me?… Barbarism will not have the last laugh. Reason will prevail. Humanity will win in the end.”

Describing himself in “utter disbelief” before the continuing police and vigilante violence against people suspected of drug peddling and other crimes, as well as the president’s professed indifference to human rights concerns, the archbishop wrote: “Both the guilty and the innocent are humans. The humanity in me bleeds each time a fellow human is killed. The humanity in me cries each time I see a parent and a child grieve over loved ones killed on the sidewalk or thrown in grassy areas hogtied or masked with tape. The humanity in me grieves for fellow humans who do not mind killing criminals in the belief that their murders will lessen evil in the world. For the killer and the killed I grieve. We become less human when we kill our brethren. Every human is my brother. Every human is my sister. Everything and everyone around me is brother and sister for me.”

Archbishop Villegas’s homily was read from the pulpit throughout his diocese on Aug. 7, and it was published on the diocesan website. He asked his parishioners: "From a generation of drug addicts shall we become a generation of street murderers? Will the do-it-yourself justice system assure us of a safer and better future?"

While he acknowledged the need for greater efforts against drug trafficking and other drug-related crimes, on Aug. 3 Bishop Juan de Dios Pueblos of the diocese of Butuan in Agusan del Norte also emphasized the need for due process. “We are living in a democracy, [the drug war] has to follow judicial process,” he said.

According to local media, Teodoro Bacani Jr., bishop emeritus of Novaliches, also warned police: “The end does not justify the means,” urging that human rights and proper judicial procedures be respected.

In a testimony to how quickly the human rights situation has deteriorated in the Philippines since Duterte came to power, in recent weeks the nation’s Catholic bishops’ conference has begun an anti-violence program simply called “Do Not Kill.” The campaign seeks to organize family members of the victims of extrajudicial executions and continues an appeal, first issued in June, to the nation’s police not to participate in or tolerate extrajudicial killings of drug dealers, traffickers and other criminal suspects.

An implied shoot-to-kill policy on drug dealers and traffickers had propelled the presidential run of President Rodrigo Duterte. As mayor of Davao City, when he was known as “The Punisher,” Duterte had similarly tolerated and even encouraged the summary executions of as many as 1,000 people suspected of committing drug crimes. He is believed to be personally linked with one vigilante group, the Davao Death Squad.

Duterte is not on good terms with the Catholic hierarchy in the Philippines and so far has shown little concern that his tough-on-crime posture will prove too much for crime-weary Filipinos. He has similarly proved impervious to international criticism so far. On Aug. 8, in fact, he announced the broadening of his anti-drug trafficking crusade, releasing a list government officials, judges, members of Congress and military officers he accuses of having links to the illegal drug trade. His televised address came just hours after he vowed to maintain his "shoot to kill" order against drug dealers.

In his address Duterte declared that the officials he accused would have their day in court, but added while reading the list that "my mouth has no due process.” As mayor of Davao City, Duterte had similarly read out the names of drug suspects to local media; many of those he named were soon discovered slain.

Since his election in May, the Philippines Inquirer has kept a "Kill List" tracking deaths related to the anti-drug crime campaign around the country. It reports 611 deaths so far. According to the Inquirer, “August 3 is now the deadliest day since President Duterte took office, with 30 dead as of the list’s 11th update.” The Philippine National Police report that in July 565,806 drug suspects voluntarily surrendered to the police from all over the country.

In June the Bishops' Conference of the Philippines issued an official appeal to police, noting in a statement signed by conference president Archbishop Villegas, “We are disturbed by an increasing number of reports that suspected drug-peddlers, pushers and others about whom reports of criminal activity have been received, have been shot, supposedly because they resist arrest.” In their statement, “A Pastoral Appeal to Our Law Enforcers,” the bishops reminded police that killing a suspect is not “morally justifiable,” even if he tries to escape. The bishops issued an “appeal to humanity” in dealing with criminals and drug dealers.

"One can shoot to kill solely on the ground of legitimate self-defense or the defense of others,” the statement reads. The bishops also deplored the practice of receiving "reward money to kill another" and reiterated that it “is the moral duty of every Catholic, every Christian, in fact, to report all forms of vigilantism of which they have personal knowledge” and “to keep away from any participation and any form of cooperation with vigilantes and vigilante movements.”.

A pastoral statement issued by the Salesians last week worried that the church’s “call to respect life has apparently been left unheeded in our country. There have been extra-judicial killings of hundreds of suspected drug pushers and other people allegedly connected to illegal drug trafficking.”

Noting the order’s historic work in educating the nation’s “poorest and most neglected” youth, the Salesians in their statement say that they share the president’s desire to combat drug trafficking and “his perception that many law enforcers and our present judicial systems have often failed to bring to justice the perpetrators of…heinous crimes which, in an ever-greater degree, have been victimizing millions of our young people and their families.”

But the Salesians nonetheless described themselves as “alarmed” by “the recent wave of extrajudicial killings that have taken place at the hands of police officers, and especially of vigilantes roaming our streets unchecked and unapprehended.”

They write, “We believe that any attitude and course of action that disregards the basic principles of modern jurisprudence that any person is presumed innocent until proven guilty, and that justice has to be rendered by following due process, has to be avoided.

“We believe, likewise, that the disregard of such principles, even in the pursuance of a praiseworthy aim…may inevitably lead to serious and irreparable injustices such as the killing of innocent people, and even simple drug users who are, actually, the direct victims of the drug traffickers/pushers.”