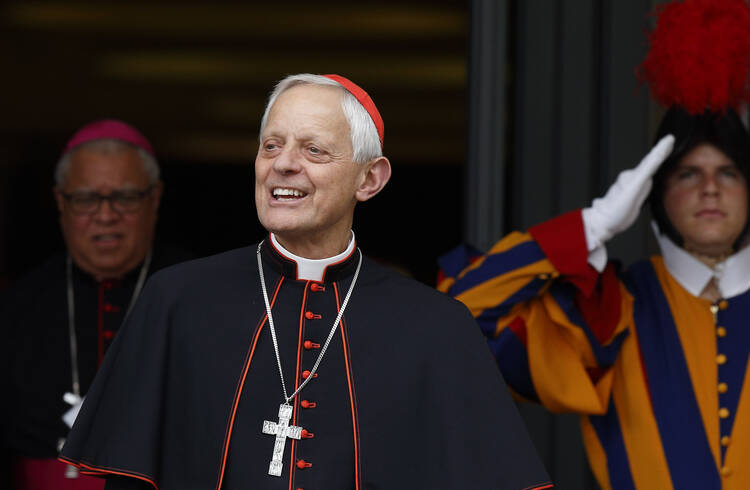 Cardinal Donald Wuerl has flatly denied the allegations by some of his fellow cardinals and bishops that the fathers attending the synod are “somehow” being manipulated by the pope and the synod structure that Francis approved. He wonders whether the underlying reason why they are suggesting or saying such things is because “they just don’t like this pope,” and find the church that he is calling for “somewhat threatening.”

In this interview with America on Oct. 18,  the cardinal archbishop of Washington charged that a number of his brother cardinals and bishops have their own position and think that some questions now on the synod agenda should not even be discussed.  He said some of these people “are speaking, sometimes surreptitiously, sometimes half-way implying, then backing off and then twisting around” and in this way they have "tainted" the synod process in the public eye with their groundless allegations of manipulation, and so cast a cloud over its outcome.

Cardinal Wuerl has a long experience of synods, having attended seven as a bishop and having served as general rapporteur at one. He is known as a man of great equilibrium, patience and wisdom and, not surprisingly, Pope Francis appointed him as one of the 10 members of the special commission he established to draft the final synod document.

Given all this background, Cardinal Wuerl is well positioned to judge the present synod process and, in this interview, he categorically states that he hasn’t seen even the slightest hint of manipulation at this synod. On the contrary, he says, the bishops have greater freedom than ever before to speak their mind and have more time than in any of the past synods to discuss the issues in depth in the small language groups.

Cardinal Wuerl said, “there are always people who are unhappy with something that is going on in the church, but the touchstone of authentic Catholicism is adherence to the teaching of the pope.”

Three articles have been published in recent days: Archbishop Chaput, writing in the Wall Street Journal, expresses "anxiety" about the synod’s outcome, Alexander Stille in the New Yorker predicts the synod will be "a failure" for the pope, while the New York Times columnist Ross Douthat detects "a plot" to subvert Catholicism. And even before all this happened, a letter to the pope from 13 cardinals—among them Di Nardo and Dolan—was leaked to the press and has, perhaps, ignited some of the suspicion and suggestions of a manipulated synod. How do you respond to all this?
My read of the synod, apart from what other people are saying about it, is that what we have is a very real effort on the part of the Holy Father and of the synod structure to allow the bishops to come together and to speak very openly and very clearly about whatever they think needs to be said. And that should take place in the synod hall.

Then the process—which is an improvement, at the request of the bishops, on what has been taking place over the years—the process of the synod is to allow the smaller groups much more time because that’s where the real debate takes place. And out of that comes the reflection on this report ("relatio" working document) by all of these bishops in the 13 small (language) groups.

The 13 rapporteurs have then the task to report back to the full body of bishops. Then, at the end of all this debate, those 13 elected rapporteurs have to sift through all of the amendments, and once they have sifted through them and said these are the ones that reflect some sort of consensus, they pass them on to the writing committee.

Now remember, the writing committee itself is a great step forward in terms of a widening participation of the bishops. There were not writing committees in the past, the general rapporteur (general relator) and the special secretary did all that (and both were always appointed by the pope!). At the last synod in 2014, however, the Holy Father said this is not working very well because after the first interim report there was this great outcry that it wasn’t done well, so he enlarged it. And he has enlarged the writing committee even more for this synod.

I don’t see any of that as manipulative. I see it as widening the participation of the bishops (compared to the past).

Now there are some bishops whose position is that we shouldn’t be discussing any of this anyway. They were the ones at the last synod that were giving interviews, and denouncing and claiming there were intrigues and manipulation. That, I think, falls on them. I don’t see it with a foundation in reality. I just think that these are people who have their own position and they just want to articulate that, and they have taken to saying that somehow the Holy Father and the synod structure are trying to manipulate all of the bishops. I just find that does not correspond to what I see, to what I experience, and what I’ve experienced over the years in dealing with synods.

How do you interpret these people who seem to imply that the pope is somehow manipulating the synod? It seems almost like a vote of no-confidence in Pope Francis.
I don’t know what would bring people to say the things that they are saying because we are all hearing the pope, and the pope is saying nothing that contradicts the teaching of the church. He’s encouraging us to be open, to be merciful, to be kind, to be compassionate, but he keeps saying that you cannot change the teaching of the church.

I wonder if some of these people who are speaking, sometimes surreptitiously, sometimes half-way implying, then backing off and then twisting around, I wonder if it is really that they find they just don’t like this pope. I wonder if that isn’t part of it.

Many now think that the thermometer of the success or failure of the synod is how it will address three controversial questions: whether the divorced and remarried can be allowed to communion, what approach the church will take to homosexuality and homosexuals, and how the church looks at cohabitation and cohabiting couples.
I think what’s going to happen in the synod is we’ll continue to talk about the teaching of the church which remains unchanged, and we will continue to hear the pope calling us to be compassionate, to be caring, to be open, to meet people where they are, to try to accompany them. Whether that will be clearly reflected in the synod’s final document I can’t say, because one never knows what type of momentum building up under this proclamation that this is a rigged event, that this is being manipulated. But, in the long run, I think the voice of the church’s openness to people in difficulty, and the church’s caring embrace of people who are having difficulty in living up to the fullness of the Gospel will win out, it just may not make it into the final document of this synod.

How did you interpret Pope Francis’ talk yesterday, at the celebration for the 50th anniversary of the establishment of the synod, which seemed to have gone down very well, earning him a standing ovation?
I thought the pope’s speech yesterday focused exactly on where we need to be. The church “with and under Peter” moves forward. There are always people who are unhappy with something that is going on in the church, but the touchstone of authentic Catholicism is adherence to the teaching of the Pope. The rock is Peter, the touchstone is Peter and, as the Holy Father said, it’s the guarantee of unity, it is in no way suppression, any more than John Paul II was a suppression of freedom, or Paul VI was a suppression of freedom. They’re the touchstones of the authenticity of the faith.

So what is a realistic expectation from this synod?
I think that right now there has been so much tainting of how the synod is being seen. I don’t think the process has been tainted, I don’t think the synod itself has been tainted, but the lens through which it is being seen by many, many people has been tainted, and so I suspect that that will have some impact. It’s not going to be a long term impact because you can only paint something in false tones and have it remain understood incorrectly for so long, after a while the church wins out.  The great maxim—magna est veritas et semper prevalebit—the truth is great and it always wins out, even with all of this propaganda and all of this distortion.

Are you expecting the pope to publish a document after the synod, given that yesterday he said that the synod journey culminates when the pope speaks authoritatively?
I don’t know in what manner that will take place. I know that at the end of the synod, synods have always in recent years turned over to the pope the material and asked would you do something with it. Part of the tradition has been to do an apostolic exhortation, although it wasn’t always that way in the first synods. And it doesn’t have to be that way now; there’s nothing that says there must be an apostolic exhortation, but the pope can speak on any of the material from the synod that he chooses to. He has lots of different prerogatives, and there’s no one way in which the voice of Peter is to be articulated.

So you are very confident that even if in the short term there may be some cloud over the conclusion that in fact the dawn will come rather quickly.
Well, as I said, there’s this tainted lens through which everything is being seen because there have been those that said, and set out to call into question the integrity of this synod, but at the end of the day I think the truth is going to win out.

What do you say to those brother bishops who said and did this?
There’s not much you can say because if someone isn’t willing to hear you then obviously.... I have been saying all along I do not see this synod has some manipulated operation of the pope and the synodal leaders to somehow pervert the will of the bishops and change the teaching of the church. I know that has been said, I just don’t see it.