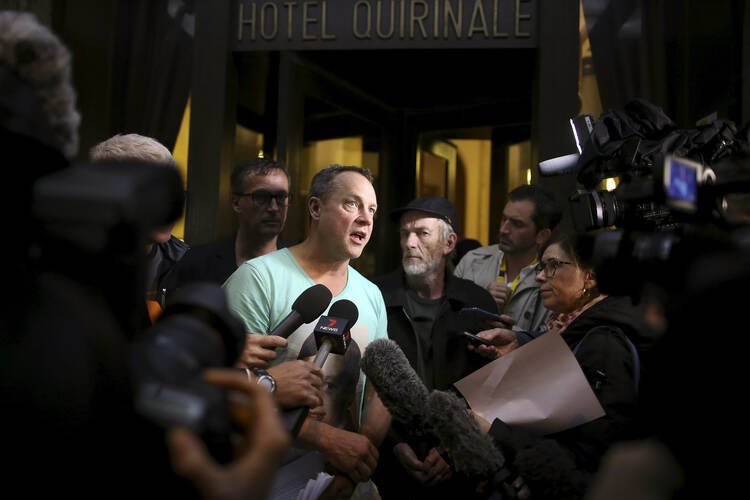 Cardinal George Pell concluded his four-day testimony to Australia's Royal Commission into Institutional Responses to Child Sexual Abuse around 2:40 a.m. (Rome time) on March 3, after a lengthy cross-examination by lawyers for the victims, under the watchful gaze of the international media.

Some 80 people, including 15 survivors and relatives of the victims, clergy and lay friends of the cardinal and members of the media were present at the Hotel Quirinale in Rome on March 2 for the final session (which lasted nearly six hours, including breaks), conducted via video conference with the commission from Sydney.

The cross-examination focused on the sexual and other abuse of children in Ballarat and Melbourne in the 1970s and 1980s, and Cardinal Pell’s response—or lack of response—to it. Asked to explain why there were so many child sexual abusers in Ballarat East in the 1970s, among them Australia’s most notorious abuser priest, Gerald Ridsdale, and a Christian Brother, Edward Dowlan, the cardinal said, “It was a disastrous coincidence.”

He denied yet again that he had any information in 1975 regarding the crimes committed by Ridsdale, and said that neither the local bishop, fellow priests on the body of consulters to the bishop nor the local police had ever told him that the priest had sexually assaulted a child or that he was a risk to children.

Earlier in the week, Cardinal Pell upset survivors by telling the commission that after Ridsdale’s conviction in 1993 he viewed the priest’s crimes as “a sad story and not of much interest to me.” Asked to explain his statement, the cardinal said he remembered “messing up this sequence,” and added, “I regret this choice of words. I was very confused, I responded poorly.” He explained his words, saying he “never enjoyed reading the accounts of these sufferings” and only did so when “it was professionally and absolutely appropriate because the behavior is abhorrent and painful to read about.”

Responding to questions, he confirmed that in the mid-1970s a teenage schoolboy had told him that Dowlan, a Christian Brother, “was misbehaving” with other boys at St. Patrick’s College in Ballarat. Asked what he had done about this complaint, Cardinal Pell said he had raised the question with the school chaplain who, after consulting the principal, assured him all was under control. He admitted that he took no further steps to verify if this was indeed the case as there were no specific allegations and “the boy wasn’t asking me to do anything about it, but just lamenting and mentioning it.” Hearing this, the chairman of the Royal Commission, Judge Peter McClellan, intervened and asked, “Why was it necessary for people to ask you to do something rather than for you to accept information and initiate your own response?” The cardinal said he was less aware of his obligations then than he is today, but, in the light of his 40 years’ experience, “I would agree that I should have done more.”

At various stages in his testimony today, and in previous days, Cardinal Pell appeared to attribute his failure to take forceful initiatives against the abuse of children in the 1970s and ’80s to a number of factors. First, he claimed to have had either no knowledge or inadequate knowledge to act and revealed that he was not given this crucial information by either his bishop in Ballarat or in Melbourne.

Secondly, he said he trusted what he was told by the two bishops, his fellow priest counselors, the chaplain at St. Patrick’s school and the Catholic Education Office. Thirdly, in the 1970s especially, he recalled that, like so many others, he, too, tended to believe the priest who denied allegations of abuse rather than the child victims who made them. Fourthly, in a number of situations he felt the responsibility to act decisively lay with others in positions of authority, not with him.

Right at the end of the hearing on March 3, however, under cross-examination from his own counsel, Sam Duggan, the cardinal testified that he had acted decisively against a pedophile priest in the Archdiocese of Melbourne less than a year after becoming archbishop there. Thus, in early 1997 he “retired” Father Peter Searson and took the process to the Vatican to remove him from the ministry, but, he said, “Rome found against us. They didn’t support the way I had done things...but I just ignored this Roman decision, and Rome didn’t push the point.”

Judge McClellan told Cardinal Pell that they had no more questions to ask him. The tired but clearly relieved cardinal then left the room. Before returning to the Vatican he met the press briefly and told them, “It’s been a hard slog for me and I’m a bit tired,” but “I hope that my presence here has contributed a bit to healing, to improving the situation.”

For their part, however, the survivors and relatives of the victims (some of whom are dead), remained unhappy with the cardinal’s testimony; they told the press that they had come to hear the truth and had not heard it. One of them, Chrissie Foster from Melbourne, the mother of two girls who were abused by a priest (one has since died as a result of an overdose after first attempting suicide; the other is confined to a wheel chair after being hit by drunk driver) told America that in her view Cardinal Pell was “evasive” in his testimony.

They have asked for a meeting with the pope, but it is not clear if this is possible at such short notice given the pontiff’s heavy schedule and the fact that they are scheduled to return to Australia tomorrow.

Cardinal Pell, for his part, has reached out to the survivors; most of them are from Ballarat, his home town. This morning, March 3, in an effort to promote healing and reconciliation, he returned to the Hotel Qurinale to meet them.

This was the cardinal’s third and last appearance before the Royal Commission, which was set up by the Australian government in 2013 to look into institutional responses to child sexual abuse, not just in the Catholic Church but also in other religious groups, educational institutions, sporting organizations, state institutions and youth organizations.

The Royal Commission has not yet finished its work, but it has to submit its final report no later than Dec. 15, 2017. Therefore, it could be a year or more before Cardinal Pell, who will be 75 in June, receives its conclusions.

Gerard O’Connell
@gerryorome
Show Comments (
2
)
Comments are automatically closed two weeks after an article's initial publication. See our comments policy for more.
William Rydberg
6 years 9 months ago
They seem to hang on that one remark by Pell. I think that in fairness they ought to look at all of his responses throughout the days of testimony. He's not a young man (we already know his health is not good), so I think the Commissioners ought to consider that its possible that a person would have used a poor choice of words, once. The sad Australian sectarian history hasn't completely disappeared in my opinion. Pray for all concerned...
Lisa Weber
6 years 9 months ago
Cardinal Pell may not have had adequate information, but he certainly did not seek information when it would have been appropriate to do so. The unspoken part of this story is that many other people failed to seek information as well. These abuses are not the fault of one person, they are the failure of an entire system.