Pope Francis is taking 12 Syrian refugees back to Rome, and all of them are Muslims. 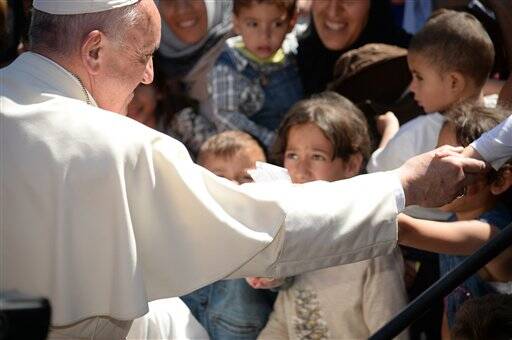 In a stunning move to show welcome for the refugees and to awaken the consciences of people in Europe and the world, Pope Francis has taken 12 Syrian refugees, six adults and six children, back to Rome with him on the plane from Lesbos on Saturday, the Vatican has confirmed. They are members of three families and all are Muslims.

The Sant’Egidio community in Rome will offer them the initial hospitality, the Vatican said.

All 12 of the refugees had arrived in Lesbos before March 20, when the European Union signed an accord with Turkey aimed at blocking the unplanned arrival of refugees, like these, in the territory of the E.U. The three families were classified as vulnerable people and were transferred to the Karatepe refugee camp on the island, from where they were chosen for this extraordinary gesture. They boarded by the front entrance on the plane before the pope arrived.

The Associated Press reports that, according to Vatican officials, the three Syrian families had all fled their homes after they were bombed.

The Vatican said the Syrians, who include six children, were brought to Italy following negotiations among the Vatican, Greece and Italy and that the Holy See would take responsibility for them.

The Vatican is already hosting two refugee families, and Francis has encouraged every parish around the globe to take in a refugee family.

Here is the Vatican statement, issued as Francis was about to board the plane. The refugees had already boarded the plane.

The Pope has desired to make a gesture of welcome regarding refugees, accompanying on his plane to Rome three families of refugees from Syria, 12 people in all, including six children. These are all people who were already in camps in Lesbos before the agreement between the European Union and Turkey.

The Pope’s initiative was brought to fruition through negotiations carried out by the Secretariat of State with the competent Greek and Italian authorities.

All the members of the three families are Muslims. Two families come from Damascus, and one from Deir Azzor (in the area occupied by Daesh). Their homes had been bombed.

The Vatican will take responsibility for bringing in and maintaining the three families. The initial hospitality will be taken care of by the Community of Sant’Egidio.

Deir el-Zour is a city close to the Iraqi border that is contested between the Islamic State group and the Syrian government. Islamic State extremists have been besieging government-held parts of Deir el-Zour for months, leading to malnutrition among 200,000 people living in the area. The U.N. has airdropped food several times over the past few months to help those who have stayed in the area.

Editors Note: This story was updated at 10:38 AM

Gerard O’Connell
@gerryorome
Show Comments (
1
)
Comments are automatically closed two weeks after an article's initial publication. See our comments policy for more.
L J
6 years 9 months ago
He is always walking the talk, that feisty Jesuit. He speaks the truth in love and then does it himself. We see the souls that hate what he is doing howling and calling him every insult known to man by selectively quoting their traditional sources . He is raining coals on our head and we should be rightly pricked in our conscience for being so indifferent to others. . May we all be more do-ers like Pope Francis and less talkers like so many on the catholic blogs