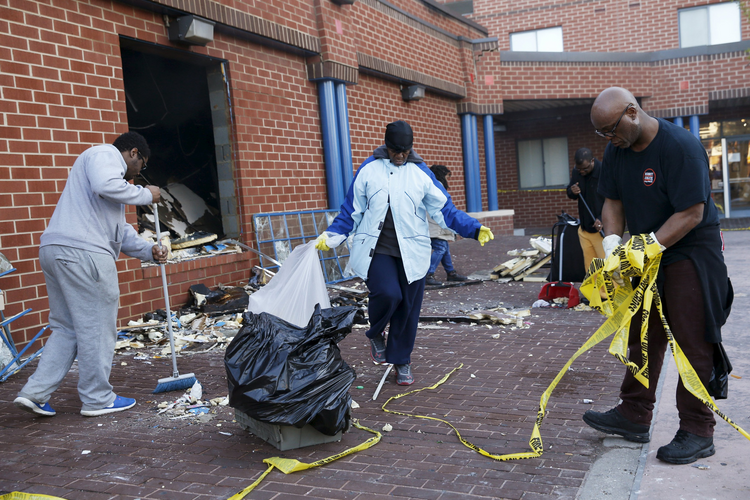 Three days after his city was rocked by civil unrest that began as a young man who died while in police custody was laid to rest, Baltimore Archbishop William Lori was pondering how the local church could respond to the crisis in the city’s streets.

“We’re not the police force; we’re not the government,” Archbishop Lori said in an interview with America on May 1, “we are a community of faith.” And our faith tells us, he said, “that we should be a force for peace, for justice, for reconciliation and bridge building.” But hope is another commodity, he suggests, that the church can offer because “hope is in really short supply in these neighborhoods.”

Like many U.S. cities, there are in a way two Baltimores, Archbishop Lori said, one where buildings are being rehabbed, businesses opened and cranes rising up and another Baltimore where “where chronically bad conditions have existed for generations”; where 52 percent of adults are unemployed, 25 percent rely on food stamps, where many struggle with poor transportation to reach low-wage jobs far from their neighborhoods, where 61 percent of the residents have less than a high school diploma, where a feeling of isolation and disenfranchisement pervades. “The systemic problems roll along,” said Archbishop Lori, “and then when an event like the death of Freddie Gray comes up, these things come to the surface. I think that’s what we’ve seen.”

These are realities outsiders may not understand, he suggested. Many people may view angry protestors or the handful of residents who participated in looting and rioting on April 27 “and the first and only thing they can say is words of condemnation,” Archbishop Lori said. “But I think if one lived in those conditions and neighborhoods and saw no way out, the anger, the boiling over becomes, not justifiable, but understandable.”

Archbishop Lori has spent the last few days meeting with local Catholic and ecumenical leaders and visiting the “epicenter” of the rioting which broke out on April 27 after the funeral of Freddie Gray. Gray, 25, had died while in police custody after suffering a catastrophic spinal-cord injury. His death became the latest in a national string of deaths of young, unarmed African-American men, and in one case a 12-year-old child, at the hands of urban police.

While Archbishop Lori believes the church can act as a bridge-builder between communities estranged from the police forces that are meant to serve and protect them, he believes first that the criminality of such acts must be addressed. “Certainly we have to recognize those [police officers] who do their job well every day and put their lives on the line,” he said, “but then we have to recognize, and it’s true in almost any profession, including my own, people who not only err, but they err intentionally and who treat people in a way that is brutal and unjustified with excessive force and who sometimes target people because of the color of their skin.

“There can be no question that that is an issue,” he said. “It has to be talked out thoroughly and that we would be looking to specific authorities to address, but the community has to be heard.” Baltimore's State's Attorney Marilyn Mosby announced that morning that Gray's death has been ruled a homicide and that six Baltimore police officers would face criminal charges which varied in seriousness from misconduct in office and false imprisonment to manslaughter and second degree homicide.

Worried that attention to Baltimore’s structural problems will fade when the media lights move on to the next “news story du jour,” Archbishop Lori argues it is time for a conversation, one he described as “overdue,” about communities that are being left behind. “Bishops have to equip themselves to participate in that conversation,” he said.

He believes the words “structural sin” applies to the civic crisis at the heart of the continuing controversy over police brutality. “I do think we should also have a national conversation that brings stakeholders to the table and that results in looking at what needs to done to address [these] systemic problems.” Archbishop Lori plans to begin by reaching out to the city’s ecumenical leaders to begin strategizing about how to bring hope back home to Baltimore.

Kevin Clarke
@clarkeatamericaclarke@americamagazine.org
Show Comments (
3
)
Comments are automatically closed two weeks after an article's initial publication. See our comments policy for more.
Anne Danielson
6 years ago
No doubt, the members of this Country have suffered both individually and as a Nation, whenever we have denied that from the moment of conception, every son or daughter of a human person, has been created in The Image and Likeness of God, equal in Dignity, while being complementary as a male or female. No doubt, we have many more bridges to cross to end this racial divide, that denies we are all members of The Human Race. Justice is not served when poverty is used as an excuse to destroy the property of others, including those residing in one's own community, men and women who have worked hard and have taken advantage of their opportunities as they help build a community and enable it to flourish. While most police officers serve for The Common Good, risking their lives in order to protect us, there is never an excuse for police brutality. Hopefully, every form of brutality and discrimination will be addressed. My concern, however, is that in diagnosing what he believed to be the systemic problems of Baltimore that led to this chaotic and lawless state, those structural problems that cannot be attributed to "police brutality", Arch bishop Lori failed to mention the breakdown of the Family, due to a culture that no longer values, and in some cases, discriminates against, fatherhood and motherhood, and the value of being a husband or a wife. No child should ever be intentionally denied the Love of a father or a mother. "The best thing a father can do for his children, is to Love their mother." - Father Ted Hesburgh "As the family goes, so goes the Nation." - Pope John Paul II
John Wakefield
6 years ago
Archbishop Lori said, "hope is in really short supply in these neighborhoods." Marilyn Mosby, at a meeting in a religious center, the week of Friday, the 1st, quoted from Isaiah, 41:10. There is a recipe here to be added to the mix: pondering the Archbishop´s words, add in the strong message from Isaiah. It is a very difficult situation. To wake up in West Baltimore is to find one´s vision sullied, from the git-go. Block by block, family by family, friend by friend ... it can be built. Re-built? Forget re-built - it wasn´t built well in the first place. This song - sung by the immense (this, in the spiritual sense of the word) Nina Simone - called, "Baltimore" - was written in 1930: Beat-up little seagull On a marble stair Tryin' to find the ocean Lookin' everywhere Hard times in the city In a hard town by the sea Ain't nowhere to run to There ain't nothin' here for free Hooker on the corner Waiting for a train Drunk lying on the sidewalk Sleeping in the rain And the people hide their faces And they hide their eyes 'Cause the city's dyin' And they don't know why Oh, Baltimore Ain't it hard just to live? Oh, Baltimore Ain't it hard just to live? Just to live Get my sister Sandy And my little brother Ray Buy a big old wagon To haul us all away Live out in the country Where the mountain's high Never gonna come back here Till the day I die Oh, Baltimore Ain't it hard just to live? Oh, Baltimore Ain't it hard just to live? Just to live ... the ending .. "Ain´t it hard just to live?" ... whew! We are praying, those of us not physically present in Baltimore. We are with you. We are one in spirit ... no sad-assed buildings can get us down. No litter, no other people´s waste ... every citizen does NOT count .. every citizen MORE THAN counts - every citizen is a diamond.
Robert Hugelmeyer
6 years ago
Those rioters were not justified but the Archbishop called for understanding. More understanding not unlike the understanding afforded the rioters should be given to the police. Were any of those arrested in all the cities that rioted been held accountable for their behavior? The Bishop spoke about one side of the problem, namely, bad police but only described conditions but did not address the underlying causes of much of the problems. We have very little information with regard to the six police officers being charged and can they get a fair trial in light of the prosecutor's comment of "giving" Freddie Gray "justice" when a person is innocence until proven guilty beyond a reasonable doubt is determined. Why did she forego the Grand Jury process? Now adding the Archbishop's remarks concerning police brutality to the mix fuel is added to the fire. Understanding the causes and eliminating them must start with the people involved. They too must assume some personal responsibility for their part as well as the politicians responsible for these neighborhoods. There's plenty of blame to go around including President Obama and Eric Holder remarks blaming entire police departments from the get go. Taking sides in the dispute causing divisiveness. Giving lip service to the riots and losing opportunity after opportunity to heal this nation whose laws are clearly not racist. Another issue is Government continuing generations after generation giving assistance without solving the problems and causes dependency. Just where do you start? God is being forced out of the common square even when it has proved to be very successful in turning around lives. Government polices destroy jobs yet they remain in place. Where is the hope?