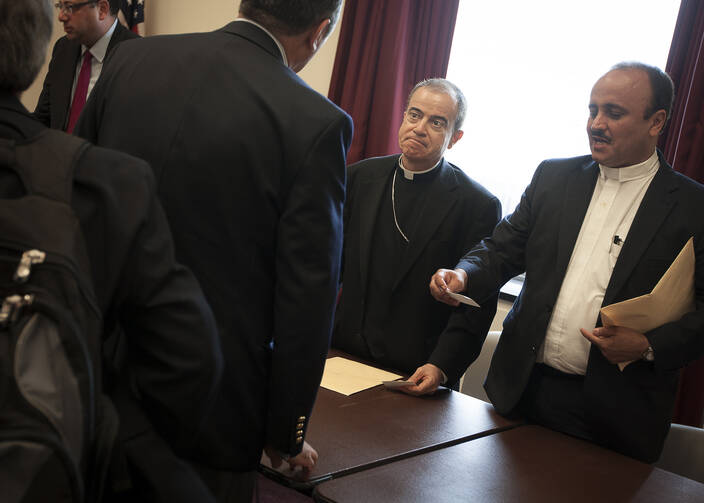 The U.S. Congress must act quickly to help Puerto Rico as the island is “in a very, very difficult situation, which is beginning to create a humanitarian crisis,” Archbishop Roberto Gonzàlez Nieves of San Juan said in this exclusive interview with America.

Because of the economic crisis, he said, more than a million people have already emigrated from the island, most to the United States, leaving some 3.5 million people in Puerto Rico, a third of them government employees. He said unemployment has skyrocketed, shops are closing, life is becoming increasingly difficult, the financial situation is rapidly deteriorating and there is a real risk that the government will have to shut down in June or July because it will lack funds to pay its employees, including the police and hospital staff. To add to the people’s misery, he reported the Zika virus has hit the country.

Today, the island’s government needs to restructure its debt if it is to stand a chance of getting out of the crisis, but it cannot make such a decision without a determination to this effect from the U.S. Congress. According to the 1898 Treaty of Paris, which ceded Puerto Rico to the United States as spoils of the Spanish-American War, the island is a non-incorporated territory of the United States; this is equivalent to being a colony. Moreover, in the early 1900s, the U.S. Supreme Court ruled that Puerto Rico belongs to but is not part of the United States. And the U.S. Congress reserves to itself the last word on what happens in the island.

Archbishop Gonzàlez Nieves, who was in Rome at the end of February with the Executive Committee of Puerto Rico’s Catholic Bishops’ Conference and met Pope Francis and senior Vatican officials, is hopeful Congress will come to the island’s aid, but he made clear that this needs to happen without more ado. An editorial in The New York Times on March 16 under the title “Congress needs to throw Puerto Rico a lifeline” suggests there is a growing awareness of this in the United States, too.

The following is the interview conducted by America’s Vatican correspondent with Archbishop Gonzàlez Nieves in Rome on Feb. 28.

The situation in Puerto Rico is critical. Could you summarize the reality is today?

Over the past 20-30 years, the different governments of Puerto Rico have accumulated a public debt, which is now about $70 billion, which means that every Puerto Rican on the island would be responsible for about $20,000.

Yes, but keeping in mind that over the past 10 years approximately one million Puerto Ricans have emigrated from the island, primarily to the United States but also to other countries, because we have lost so many jobs on the island. Quite a few pharmaceuticals have closed and the government has been reducing the infrastructure. So we are in a very, very difficult situation which is beginning to create a humanitarian crisis.

For example, in the past eight years the government has closed almost 250 public schools. In the archdiocese of San Juan, I’ve had to close five Catholic schools because we didn’t have enough students to be able to maintain the schools. A number of public hospitals have closed. The unemployment rate has skyrocketed; it is officially at 30-plus percent, but I think it is much higher.

When I visit towns in the countryside one can see that many stores have closed and many homes are for sale, the same as in the city of San Juan itself, in the metropolitan area. The financial crisis is beginning to be felt all across the board. Actually, most of the one million people who have left Puerto Rico are young professionals, because they graduated from the university and there are no more jobs for them, so they have been forced to leave the island.

What has caused this dramatic situation? You said the government has accumulated the debt over the last 20-30 years; how did that happen?

I think basically mismanagement and miscalculation over the actual needs of the infrastructure for the island’s government. Since the 1970s, every four years a different party would assume control of the government and, over the years, that increased the number of government personnel to a level that made it impossible to manage the economic infrastructure.

You are talking about taking on public employees?

What percentage are we talking about?

Well about 35-37 percent of the employees on the island are government employees.

You have stated publicly that Puerto Rico’s indebtedness is basically due to misgovernment and corruption.

So the United States is reluctant to give money because of this.

Yes, until the books are completely audited. The government has not produced audited reports for the past three years but they now say these will be ready in the next month or two.

What’s the scenario for this current economic crisis in Puerto Rico? What could happen if a solution is not forthcoming soon?

The scenario is that by the end of June or July 2016 the government may have to shut down! It will not have sufficient funds to pay for its employees, to cover the pensions for all of the retirees, to cover salaries for police and for the municipal hospitals. So the scenario is very painful to think about; it’s quite dramatic.

First of all, last September, I visited the United States with the General Secretary of the Ecumenical Coalition of Puerto Rico. We visited the White House, met with the chief of staff. We also met with a number of senators and Congress people. Actually we found a sympathetic ear. We made the argument that we’ve been advised that Puerto Rico needs to be able to declare bankruptcy in order to restructure the indebtedness. However, since Puerto Rico is a non-incorporated territory or colony of the United States, the U.S. Congress must make that kind of decision for Puerto Rico. So we’re still waiting for Congress to be able to make that determination in order for the local government of Puerto Rico to restructure its debt.

Then, this past December I was invited to speak at a congress on migration at the United Nations, recalling the situation of Puerto Rico and the humanitarian crisis. I found a great deal of openness there and support of the need for Puerto Rico to have the U.S. Congress to support bankruptcy for the island.

So the declaration of bankruptcy would really give the possibility of new life to the island?

Yes. But it would still involve austerity measures, though less, because we don’t want the infrastructure of the island to collapse as that would create a host of problems, social problems, social stability, trying to work out in a peaceful fashion the solutions for the crisis.

I take it you are getting support from the church in the United States also in this dramatic situation?

Yes, Archbishop Thomas Wenski and his committee at the U.S.C.C.B. have been very supportive to the cause of Puerto Rico being able to restructure its indebtedness with the support of Congress. They are a lobby force for us.

You also have a serious health problem on the island: the Zika virus. How big is that problem today?

As of today, Feb. 28, we have 200 confirmed cases of Zika. Now the mosquito that produces Zika is the same mosquito that produces dengue and chicongugnia, and we’ve had that mosquito in Puerto Rico for many, many years. I remember 20 years ago in Puerto Rico my mother had the dengue and was hospitalized for about two weeks. Two years ago, I myself was bitten by the mosquito and had chikungunya. Thank God I have not been bitten by the mosquito for Zika. In actual fact, it is a very frightful scenario in the island because we’ve had thousands of people with chikungunya, and over the years thousands more with dengue, and now we face the Zika crisis.

So the pope’s words about Zika on the plane returning from Mexico were important?

I think they were very important, very illuminating because governments, or at least the government in Puerto Rico, has raised the issue of condoms as one of the main solutions for this crisis. I’ve tried to say—I’ve said it publicly in Puerto Rico—that with condoms or without condoms if we do not eradicate the mosquito then we’re going to be in the same situation, so the primary focus for reducing the impact of the Zika epidemic has to be the elimination of the mosquito, the aedes aegypti mosquito.

Other forms that can be used [to combat Zika] are secondary, keeping in mind that it’s important for people, in their conscience, to come to that determination. But the primary focus should be on eradicating the mosquito.

You have come to Rome with the executive committee of the Puerto Rican bishops’ conference to talk with Vatican officials and with Pope Francis, and I imagine you are going to bring the question of the dramatic economic crisis in the island to their attention.

Yes, it’s on our agenda. We’re confident that the Holy See will continue to help us at the United Nations and, through their good offices, with the United States.

I remember the pope’s candor. First of all, he said, I’ve invited you to lunch so that with a little wine you can loosen up your tongues. So we all had some wine at lunch! He asked about quality of pastoral life in our dioceses, he asked about the historical, social and political situation in Puerto Rico. He seemed very interested in being informed about our reality.

I understand that in Puerto Rico you have the second oldest church in the Americas, San Josè, and you are trying to give it a facelift.

Well not just a facelift but a restoration because it had quite decayed, and hopefully within the next couple of years, as we approach the 500th anniversary in 2018, we will be able to celebrate the complete restoration of the church.

It would be a dream, but we haven’t approached the pope yet about this possibility.