Archbishop Forte: ‘Accompaniment’ and ‘Integration’ are Key Words for Synod 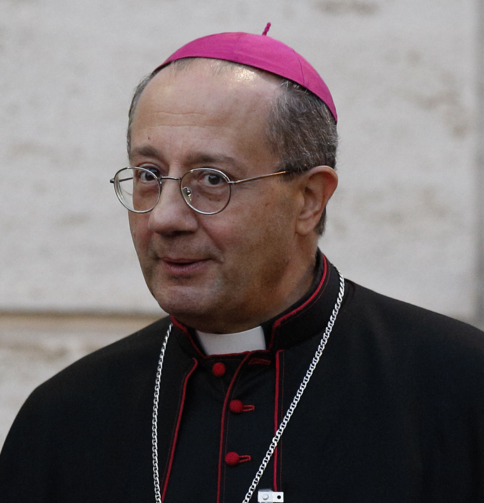 “Accompaniment” and “Integration” are the two key words of the Working Document for next October’s Synod of Bishops on the Family, Archbishop Bruno Forte, the synod’s secretary, said at a Vatican press conference, June 23. It’s clear that the doors are open, not closed before the synod discussion.

Those two words are found particularly in Part III of the 77-page of the Working Document (WD), or “Instrumentum Laboris” as it is called in Latin. This text will serve as the basis for the three-week long discussion by participants at the XIV Ordinary Assembly of Bishops that has as its theme: “The Vocation and Mission of the Family in the Church and in the Modern World.” The synod will be held in the Vatican October 4-25.

The WD is divided onto three parts, and eleven chapters. Part I highlights the challenges that the family faces today in different parts of the world. Part II examines the discernment of the family vocation and brings out the beauty and the importance of the family in the light of the Christian Gospel. Part III discusses the mission of the family today.

The concept of ‘family’ is used by the WD in the broad sense to include parents, children, cousins, grandparents and the relation between the two families from which the couple come. It uses the term “marriage” only for the union of a man and a woman, and reaffirms the Christian understanding of marriage as an “indissoluble” union of a man and woman, open to having children, and blessed by the Church.

Compared to the 2014 synod, Part I is “a more ample and profound analysis of the situation of families in the world,” and is enriched with 18 new themes, Cardinal Lorenzo Baldisseri, the Secretary General of the Synod stated. A rapid read of the text reveals that it speaks about the “dramatic” situation of families hit by wars, economic difficulties, unemployment, poverty, hunger, famine, migration and usury, human trafficking, discrimination and violence against women and the sexual exploitation of children. It emphasizes the need for the Church to respond to their desperate plight by accompanying them in various ways, and also by calling for structural changes in the present economic system and by asking governments to develop socio-political and economic policies that support and assist families.

The WD acknowledges (Part I) that “only a minority live, sustain and propose the teaching of the Catholic Church on marriage and the family.” It also notes a decline in the number of marriages – whether religious or not, as an increase in the number of separations and divorces. It says young people are reluctant to marry or form a family but often live together. While reaffirming the Catholic moral teaching, it seeks to address the consequences of all this –particularly in Part III- and looks for the positive aspects in these various situations, not just the negative elements.

“The WD speaks about exclusion and about breaking down the walls that have been built up and building bridges to people,” Cardinal Baldisseri told the press. This is particularly evident in the way the WD seeks – in Chapter 3 of Part III - to approach in a pastoral way the various types of irregular unions among Catholics today, including situations of cohabitation, civil marriages, separation, divorce and remarried, as well as the situation of single parent families and those families in which there is a homosexual person. The text reaffirms the Church stance against discrimination of homosexuals, but it does not enter into any further discussion of homosexuality since its focus is on the family as understood above.

All these topics were discussed at the last synod, and approved by majority vote. And in the WD we find the same spirit, non-judgmental language and inclusive approach that were the hallmarks of the 2014 synod.

We see this, for example, when the WD speaks of the different reasons why “an increasing number of couples” choose to live together rather than get married. Following the 2014 synod, it says “all these situations need to be faced in a constructive manner, seeking to transform them into opportunities of a journey towards the fullness of marriage and of family in the light of the Gospel.” When such a relationship turns out to be stable, trustworthy and open to life, this can be seen as the beginning of a journey that’s open to the possibility of sacramental marriage.

Speaking about marriages that have broken down, the WD makes clear that all those who responded consider it a fundamental principle “to care for wounded families and make them feel the mercy of God.” Everyone recognizes that marriage break-down is “a defeat for all,” and that afterwards people need to recover trust and hope once again. “Everyone needs to give and receive mercy.” To begin with, the Church asks couples who are separated or divorced to show respect to each other, and not bring more suffering to their children.

The WD emphasizes the need for the Church h to “accompany” such couples and families, and this means “to adopt a wide and differentiated attitude” to their different situations, remembering that “God never abandons anybody.”

The WD says “there’s wide consensus” for speeding up and streamlining of the process for annulment of marriage and, if possible, make it free. There’s “broad agreement” for the elimination of “the second sentence” in the judicial process. Not everybody, however, agrees with turning the annulment process into an administrative one conducted by the local bishop. There’s agreement too in considering “the faith” of the person who gets married as a “relevant” factor in the annulment process, but the issue needs to be deepened.

It reports that there are calls “from many parts” that “the accompaniment” of these persons “should orient them towards an ever greater integration in the life of Christian community, taking into consideration the diversity of the situations from which they start.”

The WD calls for “re-thinking the present forms of exclusion that are practiced in the liturgical-pastoral field, as well as in the educational and charitable fields” and says that “given that these faithful are not outside the Church, it is proposed to consider dropping these exclusions.” This could be an important new direction for the synod.

The WD adds that it would be well that these “journeys of pastoral integration be preceded by an opportune discernment on the part of the pastors regarding the irreversibility of the situation and the life of faith of the couple in the new union” and, moreover, it says that this should also be accompanied by making the Christian community aware so they welcome these people and that all this should be conducted “according to the law of gradualness”

In line with the 2014 synod, the WD talks about “the possibility that the divorced and remarried may accede to the sacraments of Penance and the Eucharist.” It noted that some synod Fathers wanted to maintain the present discipline while others “spoke about the possibility of a non-generalized welcome to the Eucharistic table in some particular situations and on precise conditions, especially when linked to irreversible situations and linked to the moral obligations towards the children who would suffer unjustly.”

The 2014 synod spoke about the access to the Eucharist after “a penitential path,” and called for a deepening of this question. The WD says there’s “common accord on the hypothesis of a journey of reconciliation or a penitential way, under the authority of the bishop, for the faithful who are divorced and remarried civilly, who find themselves in irreversible situations.”

But some advocate “a path of becoming conscious of the failure and of the wounds caused, and a commitment to spiritual communion and the decision to live in continence.”

Others proposing the penitential path “intend a process of clarification and new direction, after living through a failure” where they are “accompanied by a priest” designated for this process. This should lead the person to “a honest judgment on his/her condition, in which the priest may also mature his evaluation so as to make use of his power of binding and losing in a way adequate to the situation.”

From a rapid read of the text, and having listened to speakers at the press conference, at which also Cardinal Peter Erdo - the synod’s Rapporteur, spoke, it is clear that this is surely the most delicate issue under discussion and will need further deepening at the synod before it reaches its conclusion. At the end of the synod process, here as in other situations, Pope Francis will take the final decision after receiving the synod’s input.

Note: The Synod’s Working Document is currently only available in Italian, but it is being translated into English and other languages.