Young and Stressed Out in Japan 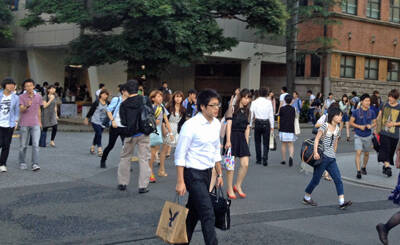 “Competition…” It was the immediate and unanimous response to my question: “What are the biggest issues facing Japanese young people today?” This one-word refrain was offered up by three Jesuits I spoke to in Tokyo who range in age from late 30s to late 80s.

The Japanese have long been known for their discipline and work ethic but since the bubble burst on the Japanese economy in the early 90s some of the assumptions that earlier generations made about the future have been replaced by a great deal of anxiety. Parents who worry about their children certainly isn’t a Japanese invention but the economic security that used to take the form of lifetime jobs in good Japanese companies is by no means a given anymore and the impact on parents and young people alike is very real.

Japanese students experience an enormous amount of pressure at a very early age to perform well and achieve academically so they will have better chance at the shrinking pool of good jobs. It’s a reality that Bill Currie SJ has experienced firsthand.

“As president of Sophia University, I would travel around Japan to meet with parent groups of Sophia students…sort of a college-level PTA meeting” Fr. Currie said. “When I would tell them that, in America, young people needed to be prepared to change careers three or four times in their lives, a look of horror would come across the faces of Japanese parents.”

Students feel their parents’ terror acutely. “When I would prepare for these parent meetings I would ask students what messages they wanted me to relay back" Fr. Currie said. Invariably, they told me to tell their parents to stop placing all of their expectations and desires for their own lives on them.”

Sali Augustine SJ is a Jesuit in his late 30s from southern India who has been at Sophia for 18 years. Prior to his present job as the director of the office of student affairs he headed up the Catholic center here.  Helping students cope with high levels of stress is a responsibility the university takes seriously. That isn't unusual for American colleges but in a nation like Japan where counseling and therapy still carries a stigma, Sophia is definitely an outlier. Students here avail themselves of approximately 3000 counseling hours per year.

But beyond the anxiety, Fr. Augustine sees something deeper going on. Citing Japan's high suicide rate as one indicator of the spiritual emptiness he senses in this highly secular country he told me that students, and even many parents "experience a profound spiritual hunger. Though they might not even have the language to express it as such it is very real."

There is an openness among students toward spirituality--as long as it remains undefined and not institutional. "Students here often seem to believe that institutional religions have been the source of all evil in the world" he said. It's an attitude that certainly has its corollary in America where religion has a strong foothold but it struck me as strange coming from young Japanese students who have grown up with little religious experience whatsoever.