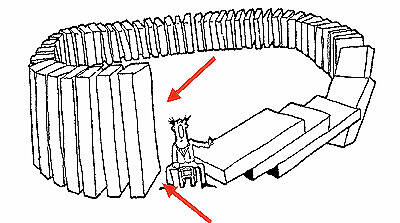 Cambridge, MA. In the first of this Lenten series, I took up the opening of the second chapter of the Yoga Sutras, where the “yoga of action” is comprised of ascetical practice, study, and a turning to the lord. Such yoga serves to quiet the mind, leading it away from attachments, from the “afflictions” — including ignorance and ego and craving — and toward a state of absorption, a turning within. While this program cannot be thought to be identical with what a Christian might do in Lent, the idea that these forty days should foster this quest for inner tranquility and detachment should surprise no one, even those more inclined to acts of charity and service. There are other, similarly straightforward parts of the Second Chapter of the Sutras to which we will turn soon, but it would be disingenuous to skip over some difficult intervening verses that have to do with karma — deeds and their residues that burden ordinary and spiritual being in a particularly deep and stubborn way: the world as a mass of activities and their results, often violent and for the worse. So bear with me as I summarize the rather dense verses that follow. (Again: there are many, many commentaries one can consult for fuller explanation.)

Like many a Hindu text, the Yoga Sutras see karma — analogous to a sweeping mix of original and actual sin, cosmic and personal — as causing pain and disorder such as pervade every aspect of life, seeping even into the very fact of living: “Rooted in the afflictions (ignorance, ego-centeredness, desire, aversion, and longing for continuity), the residue of karma is felt in the arising of effects that we see and effects invisible to us. While that root of karma is still there, its ripening too is there: birth, the span of life, and experience. All three of these have fruits that are delightful or very painful, because of merit and de-merit.” (II.12-14)

A discerning reader may recall at this point the opening of the Book of Ecclesiastes: “Vanity of vanities, says the Teacher, vanity of vanities! All is vanity. What do people gain from all the toil  at which they toil under the sun? A generation goes, and a generation comes, but the earth remains forever. The sun rises and the sun goes down,  and hurries to the place where it rises. The wind blows to the south,  and goes round to the north;  round and round goes the wind,   and on its circuits the wind returns. All streams run to the sea,  but the sea is not full;  to the place where the streams flow,  there they continue to flow. All things are wearisome;  more than one can express;  the eye is not satisfied with seeing, or the ear filled with hearing. What has been is what will be,  and what has been done is what will be done;  there is nothing new under the sun.” (I.2-9)

Similarly, the Yoga Sutras contemplate life as momentarily joyful and pleasurable, sad and painful: “Due to change, pain, persisting impressions, and suffering, and because of obstacles that arise due to the movements of nature’s constituents, the discriminating person sees that all is nothing but suffering.” (II.15) The constituents (gunas) mark “nature” as a bundle of energies and possibilities, arising and decay; even when the world is at peace, it is changing, devouring itself as its fuel, coming to be and passing away.

This manner of contemplation of good and evil — without and within — as momentary states may be overwhelming, for nothing is left out or to be taken for granted. But the Sutras advise not passivity, but a determination to change what can be changed: “It is future suffering that can be ended.” (II.16) A sober, unromantic attitude toward life enables one to see the future in a cold and clear light — with a clear-eyed freedom that changes one’s relation to it.

The Sutras will soon enough turn again to practices, things to do and not do. So why this very philosophical interlude? It seems clear that Patanjali, author of the Sutras, is skeptical about unreflective actions, no matter how energetic or sincere. Action — as karma — may be intended to do good, but just as easily, or moreso, makes us part of the problem, not somehow a counterforce to it. One cannot say that the goal is to turn away entirely from the world, since the free person is, simply, the one who sees; and there is no reason, here at least, to think that one closes one’s eyes to the world about one. The goal rather is to see with calmness, neither lust nor repulsion, neither comfort nor anger.

And so, although yoga is often thought of as very physical, the Sutras primarily encourage exercises that are intellectual and spiritual. Even here, in the Chapter that is about the “Yoga of Action,” the Sutras do not turn quickly to postures, breathing and the like. The core solution to life’s problem is a changed attitude to our very experience: “The very contact of seer and the seen is the root cause for what should be ended.” (II.17) It is hard to be an observer without becoming entangled in what we see, even identifying with it as who we are. Freedom and the ending of suffering lie in a simple yet elusive insight: “The seer is simply the seeing; though pure, seeing in accord with ideas.” (II.20) When we are ignorant, we have no sense of ourselves that is not determined by the things we have and do (II.25); insight into who we are — and are not — sets us free (II.26), and then our wisdom is complete with respect to what is wrong and right in life, the steadying of the self in its own self. (II.27)

Only when this tranquility is in place, can there be action that does not merely added to the hyperactivity of the world. This section of the Sutras may beneficially remind us that that what may be required is a sober, steady gaze at the mass of afflictions that beset the Church today — the problem of our loud words and clumsy deeds, particularly at the top.

It was for this that by a yogic insight of sorts Jesus spoke so directly of the inner source of our problems: “Then do you also fail to understand? Do you not see that whatever goes into a person from outside cannot defile, since it enters, not the heart but the stomach, and goes out into the sewer? ...It is what comes out of a person that defiles. For it is from within, from the human heart, that evil intentions come: fornication, theft, murder, adultery, avarice, wickedness, deceit, licentiousness, envy, slander, pride, and folly. All these evil things come from within, and they defile a person.” (Mark 7.18-23)

I cannot help but add: It is early enough in Lent for us to consider the possibility that all we really need to do this Lent is to learn to see the world, ourselves included, as if for the first time, sober and clear-eyed, without words and actions for a time. Right now, when the Church is on edge, awaiting a new pope, it is easy to be overwhelmed by the complexity of what lies before anyone taking up that office, and it is tempting to spend our time thinking about who should do what, or stop doing what. So here's a real Lenten discipline: it might be good for the Church to live sede vacante for a full year — contemplating an empty seat of power — before electing a new pope. We might think of it as a long Lent, to get down into the more stubborn roots of our bad and good deeds.