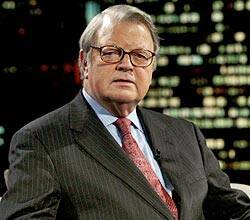 No matter how upset an author may be by a review of his or her book, the conventional wisdom is not to write a letter in response. The letter will only draw more attention to the critical review, and the author is likely to come across as petty and defensive. Garry Wills, a frequent contributor to the New York of Books, breaks this unwritten rule in the latest issue, writing a rather petulant response to William Pfaff's mild review of Wills' latest book, Why Priests? I suspect there may be some history here—Wills and Pfaff have been around a while, and both traveled in similar Catholic circles—but the exchange raises some interesting questions. What is a book review for? Are reviewers required to take on every element of an author's argument, or are they free to use the form as they see fit? I tend to agree with Pfaff. The reviewer should first of all seek to serve the reader, and the election of a new pope gave him an opening to consider some other pressing issues. Let others consider the merits of Wills' scholarly argument.

I cannot object if a person finds a book of mine too onerous or boring to read but, in that case, he should not pretend to review it, as William Pfaff did [“Challenge to the Church,” NYR, May 9]. To spare himself the labor of discussing Why Priests? he wanders back to things remembered from the time when he still read books. We get his views on the history of Jansenism, the trappings of various European royal courts, the Syllabus of Errors, church reform that he thinks desirable (married priests) and that he thinks improbable (women priests).

None of these has anything to do with my book, whose basic argument concerns (1) the dim origin, logical contradictions, and odd use of the Letter to Hebrews, as a basis for the claim to a priesthood, and (2) Anselm’s theory of redemption by human sacrifice to an angry God, as a basis for the concept of the Eucharist as a sacrifice. Mr. Pfaff does not even mention Anselm, and he dismisses Hebrews with one mistaken reference, saying, “There is controversy over whether it was actually written by Paul.”

That may have been true when Mr. Pfaff was in knee pants, but a scholarly consensus was reached long before Raymond Brown wrote that “the evidence against Paul’s writing Hebrews is overwhelming.”* He does refer to Thomas Aquinas, but he would not have confused the Thomistic meaning of transubstantiation with consubstantiation if he had read my book on the distinction (pp. 43 ff). In short, if I had really written nothing about Hebrews and Anselm, subjects still sealed to Mr. Pfaff, my book would be as trivial as his review.

As most of my article was devoted to dispassionate description of Mr. Wills and the substance of his argument, I should think few readers are in doubt about the reasons why he believes that the past and present place of the clergy in the Catholic Church is illegitimate. However, he is angry that I did not say enough about his book, detailing his arguments. He seems to want from me either celebration or an attack or denunciation that he could brilliantly confound, dazzling us all with scholarship.

The ill temper and rudeness of his letter notwithstanding, why should I criticize him? I have made his point, and if readers want to know more they should buy his book. It is an earnest book; the issue is interesting, but of more concern to scholars than to laymen. It has no particular present-day importance that I can see, since the clergy have dominated the church for more than seventeen centuries and are unlikely to fling off their cassocks, abjure their vows, renounce their ordinations, and put Vatican City out for commercial development because of Mr. Wills’s book.

My other subject, the election of the new pope with the prospect he seems to offer of further change in a church still in convalescence from its bruising confrontation with post-Enlightenment European civilization, seems to me considerably more important.

My colleague Fr. Jim Martin reports that Paul Fussell wrote a very clever essay on this subject in Harper's: "The Author's Reply as a Literary Genre." Enjoy.

Vincent Gaitley
8 years 6 months ago
We're all winners when Garry Wills is complaining. He and Pfaff deserve each other; and they do belong together in the pages of the New York Review of Books.
Abe Rosenzweig
8 years 6 months ago
I use to subscribe to the NYRB, but I haven't read it regularly over the last few years--yet I seem to recall that it was pretty typical of authors to respond to reviews of their work in the letters section. Maybe I'm not remembering correctly, but if I am, then the opening swipe in this piece is inappropriate.
ANTHONY ANDREASSI
8 years 6 months ago
For someone who writes so much on Christianity, it amazes me that Wills has one of the most acerbic, ungracious tone I have ever encountered. There is no doubt that he is a very educated man and a master language. But as "The Imitation of Christ" reminds us: I would rather know the pain of compunction than be able to define it
Tim Reidy
8 years 6 months ago

Well put. And he seems to be getting more acerbic with every public utterance. Witness this piece in the NYT magazine, and his much discussed appearane on Colbert.