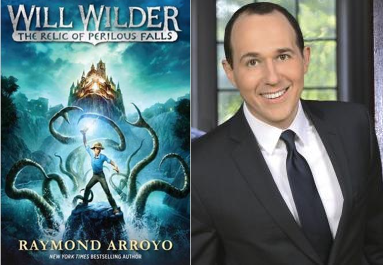 Raymond Arroyo is a New York Times bestselling author, producer and television host. He is the founding news director and lead anchor of EWTN News, the news division of the Eternal Word Television Network (EWTN), a Catholic broadcast network based in Alabama. He is creator and host of the TV news magazine The World Over Live and has written several nonfiction books. Mr. Arroyo, who recently launched the literacy campaign Storyented, is a graduate of New York University’s Tisch School of the Arts.

A native of New Orleans, Mr. Arroyo lives in Northern Virginia with his wife and three children. His first children’s book, Will Wilder and the Relic of Perilous Falls, will be published by Random House Kids on March 8. On Feb. 13, I conducted the following email interview with Mr. Arroyo.

As a journalist and nonfiction author, you seem to be taking a bit of a whimsical departure from your usual work with Will Wilder. What inspired you to write a children’s novel?

Blame my children. Will Wilder and many of these characters were born aside a bathtub. When my kids were smaller they requested original stories at bath time. So I obliged. Will Wilder and his wacky family came spilling out and they refused to go back to Perilous Falls. Over the successive seven years, I refined the story, expanded it and unearthed the supernatural thriller I wanted to tell.

At the heart of the tale is Will, an impulsive, adventurous protagonist that I think kids of all ages will come to love. I also wanted to give children, particularly boys, something fun and nourishing to read. Essentially, I am a storyteller. Whether I am reporting breaking news, producing a TV special, narrating an audio book or writing a work of fiction—it is all storytelling. I don’t see this as a departure from my previous work (which I hope includes touches of whimsy) but a natural maturation in the way I tell stories.

As we learn in the prologue, the titular relic of the book is a bone of St. Thomas the Apostle. Why did you pick St. Thomas?

I liked the idea of featuring relics in the books that readers could actually find in the real world. The remains of St. Thomas are in several locations: India and a couple of spots in Italy. St. Thomas’s relics have been credited with holding back flood waters in India and since his finger actually touched the Messiah, it served to fuel this narrative.

As a journalist I have always been fascinated by relics and the reaction they provoke in people. The question arose in my mind: What if these relics had supernatural powers? What if they were collected by Will’s great grandfather from all over the world and housed in a single museum of antiquities at the center of Perilous Falls? Throw in a daring kid with a special gift, a lethal (if doting) Great Aunt, an ascendant evil and I had a pretty great story. Is the St. Thomas bone really the titular relic of the title? Hmm…

Your book includes Indiana Jones-style details like Nazis, supernatural powers and a mischievous 12-year-old protagonist continuing his great grandfather’s quest of good against evil. Were there any particular influences from popular culture in these areas?

I glibly describe Will Wilder as Dennis the Menace meets Young Indiana Jones in the Exorcist. So you are not far off the mark. Rick Riordan has Greek gods at the center of his series. Ms. Rowling used wizardry and witchcraft. My series turns on sacred antiquities—historical items with supernatural powers.

I was also very determined that Will should be surrounded by an intact, if imperfect, family. I was tired of encountering the headstrong orphan routine in children’s literature. Let’s face it: Our futures are profoundly shaped by the decisions and actions of our parents and grandparents. Free will also plays a big role. But the example of elders became an important part of this book without my ever intending it. In the pop culture I’m sure I have been influenced by everything from The Lord of the Rings to Treasure Island to Goonies—and I love a good treasure hunt.

Who are you writing for?

I have long wanted to write a story for kids of all ages—one filled with suspense, humor, adventure and irresistible characters. The Will Wilder series is clearly written for younger readers (8 and up). But it was the hardest thing I've ever written because you are really writing for an older audience as well. Half of all kid lit is consumed by those 18 and up.

There is much beneath the surface of this series. The kids love the slapstick and the suspenseful, fun ride. Adults come away with something more. I have always been partial to the L. Frank Baum line: “My books are intended for those whose hearts are young no matter what their ages may be.” And to be back at Random House for this new literary adventure and in the care of Barbara Marcus who bought and launched Harry Potter and so many great series at Scholastic is a complete thrill.

As in your journalism, Catholicism is ever-present throughout this new book. How did the Catholic faith inform your approach to this story?

Being from New Orleans, Catholicism is like air. You breathe it in so often you almost forget it is there—but it is. I’m certain that it had an influence on the book, though I would be hard pressed to deconstruct the Catholic elements from the secular or fantastical elements. My job is to tell an entertaining tale, situate it in a coherent moral universe and stay true to the characters I have created. Like the work of Graham Greene or Tolkien, it is Catholic in the sense that it is accessible to all audiences. I will leave the critical analysis to someone else.

What do you want people to take away from this book?

I want my readers to have a great time in Perilous Falls. If I’ve done my job they’ll keep flipping the pages. They’ll love these quirky characters as much as I do and I hope feel enriched by the visit. At its core “Will Wilder and the Relic of Perilous Falls” is about the battle between good and evil. It is a struggle that plays out deep within each of us with very real consequences. This is what I tried to dramatize. And early readers of all ages seem to be enjoying the ride.

Random House is billing this novel for middle-grade readers as “the first book in the Will Wilder Series.” What are your plans for this series?

This is a big family saga. It will take several books to unveil all the secrets of the Wilder clan and the varieties of evil that they must confront. Some things will not be revealed until the last book is released. But I assure you, there is a method to my madness. I’ve spent a lot of time—years—constructing the back story for these characters. Leaking all of that out in the course of this series should be fun. I guess that’s a long way of saying, “Stay tuned.”

Are you planning any additional forays into fiction writing?

If time permits there is an adult mystery series that I have been incubating for a number of years. I love the protagonists and the setting. It is a very familiar world to me, so I am really looking forward to it. But I’ll have to venture a bit deeper into Perilous Falls before I can introduce that character to the world. One troublemaker at a time, I always say.

As a journalist and now fiction writer, who are some of the people alive or dead who inspire your work?

I feel blessed to have known so many of my inspirations. Without my acting teacher, Stella Adler (and to some degree Uta Hagen, Beatrice Straight and Robert Lewis) I would never have been able to venture into fiction. Stella taught me how create a character; how to live in the skin of another. The theater taught me the architecture of a well-told tale and how to communicate it to an audience. I don’t write for self expression. I write for a particular audience. The writers I love most, the men and women I read over and over, include: Shakespeare, James Lee Burke, Roald Dahl, J.M. Barrie, Graham Green, Robert Lewis Stevenson, Charles Dickens, Flannery O’Connor, Ron Hansen, Rex Stout, Truman Capote, Agatha Christie, Gabriel Garcia Marquez.

What can you tell us about your new “Storyented” literacy campaign?

As I started to write for younger audiences, through conversations with librarians and educators, I became aware of the literacy crisis we are facing in this country. I was totally blown away by the numbers: 21 million Americans can't read at all, 45 million Americans are marginally illiterate and according to the Department of Justice one-fifth of high school graduates can't read their own diplomas! Sixty-seven percent of all U.S. fourth graders scored below proficient in reading. Sixty-seven percent! When you start to see the correlation between illiteracy and incarceration it gives you chills.

So I thought I would do something about it. Storyented has a tag line that explains it all: Find your story. Find your way. Rich stories, particularly those consumed in our youth, do orient us in the world. They furnish us with an understanding of our place in this life and the people in it. So once a month on TV, radio and the Internet we host a Storyentation: a chance for readers to connect with their favorite authors, live. I interview the author for a half hour about their career and newest work; then readers call in or email their own questions. It’s sort of a large scale, real-time book club and it has been very well received.

There are so few places for authors to go and talk about their work—and frankly, nothing is more important than getting good works in the hands of young people. Storyented also provides families with literacy strategies to get their kids reading. We started in 2015, but we have some special plans for this year. We’re at www.storyented.com

Ray Bradbury ominously said: "You don't have to burn books to destroy a culture. Just get people to stop reading them." My hope is that the Will Wilder books give boys and girls a reason to read. Boys are lagging in reading mostly because they are not intrigued by the material. My mission beyond Will’s stories is to make sure kids find other adventurous, silly and even scary books that excite them. Our collective future depends on it.