Why is the Vatican Interested in the Search for Life in the Universe? 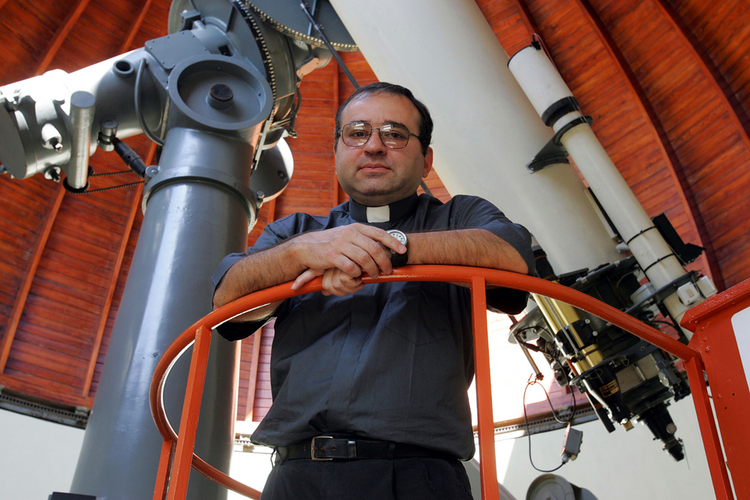 On Saturday last, I attended an intriguing seminar sponsored by The Vatican Observatory Foundation. Its topic was astrobiology. Astrobiology is a compound science which relies on astronomy, biology, chemistry to ask about the origin, evolution, distribution of life in the universe. Are there habitable environments, in our solar system and beyond it, where forms of life may have emerged? Might there be biospheres that function differently than those we know on earth? What is the likelihood of extraterrestrial intelligent life?

It seems likely, indeed most probable, that forms of life have appeared outside of earth. Many surmise that there are now (or were previously) forms of life on Mars. Some point out that a moon around Jupiter or Saturn’s moon, Euceladus, contain water and the carbon chemistry which could yield life. Even here on earth, so called extremophiles, hidden deep in the ocean in hydrothermal vents, may not be sun-dependent. Forms of bacterial life on earth have been found in conditions of heat or extreme cold which would kill most life on earth but somehow these forms thrive, also amid acidity which again would not be congenial for most living forms. This does raise the question about a possible biosphere which would function differently than those usual on earth. At present, we are only sure of life and of intelligent life here on earth.

At the seminar, Jose Funes (pictured above), the Argentine Jesuit who is the Director of the Vatican Observatory, cited the nineteenth century Jesuit, Angelo Secchi S.J. (1818-1878) who directed the Observatory at the Jesuit Roman College (the pre-curser for the Vatican Observatory). He devised the first system of stellar classification. Secchi thought there was intelligent life elsewhere in the universe. He did not find that possibility a theological anomaly. As many know, Jesuits have a long history involving astronomy. They brought the first telescopes to China. An asteroid bears the name of George Coyne S.J., former director of the Vatican Observatory. Father Daniel O’Connell identified the ‘green flash” and Brother Guy Consolmagno played a key role in the reclassification of Pluto. Many craters of the moon are named for Jesuit astronomers.

Christopher Impey from the Department of Astronomy at the University of Arizona discussed present and future research in astrobiology. Impey is the co-editor of a book (with Jonathan Lunine and Jose Flores), Frontiers of Astrobiology (Cambridge University Press, 2012) which came out of a 2009 meeting of the Pontifical Academy of Sciences on astrobiology. Impey reminds us that, even on earth, life has been found in extreme dryness (little water), extreme cold and heat, in extreme isolation. The ingredients for life as we know it (water and carbon) if not everywhere, are also found elsewhere in our solar system and, by implication, beyond it. Indeed, some planets in other solar systems are even older than earth, so could have had the long time line to develop complex life, even intelligent forms. In the entire milky way there are multiple planets which have more water than earth. 816 possibly habitable known planets are larger than earth. Some 400 are the size of earth or somewhat smaller.

Impey assumed the likelihood of life forms in other planets is very high. The ingredients which gave rise to life on earth are everywhere. Impey also talked about the project of SETI (Search for Extra Terrestrial Intelligence). For some fifty years now, sophisticated radio and optical telescopes have been employed to find signals of extra-terrestrial life elsewhere in the universe—so far, to no avail. Would we recognize a radically different language code? How likely is communication in literally millions of miles of space?

Another speaker, Margaret Race, an ecologist at the SETI Institute who has also worked with NASA on issues of astrobiology and planetary protection, raised questions of ethical and policy aspects of space exploration and the possible discovery of extraterrestrial life. She noted the risks involved in taking our species of life to other planets (much as the Spaniards wiped out much of human life in the Americas by introducing alien microbes which caused small pox, measles and other diseases) or, conversely, bringing back to earth exotic species. She warned of dangers in the deliberate use of genetic engineering in our planetary system. Who, for example has the right to resource use from Mars or other planets? Is space tourism advisable? Many of the ethical and policy issues involved in space exploration remain undecided or left totally vague. To what extent are we responsible for a planetary protection of extraterrestrial forms of life?

Bill Stoeger S.J., from the Vatican Observatory raised a series of philosophical and theological issues involved in astrobiology. To begin with, just what is life? Many definitions for it are too broad and others seem to exclude forms we would say were life (e.g., the extremophiles already here on earth which withstand levels of heat, cold, non-sunlight etc. which normal life can not withstand). How would we recognize other forms of life? Stoeger noted that the so-called anthropic principle seemed to suggest our universe was fine-tuned for complexity. Changing only a very few things in the evolution of the universe would have made the emergence of life as we know it impossible. Stoeger also warned that much of the ethics used by scientists is extrinsic (does the projected action help us with our science?) What of the intrinsic value of any and all life species? Stoeger seemed relatively calm with any findings of science. He thought that, at the worst, science would help the fundamental ideas about God, creation reach their appropriate levels of truth. In theology (where every concept of God is, per se, flawed and inadequate) as in science, the task is to filter out the more inadequate, misleading concepts to reach ones more attuned to reality as we know it. Stoeger warned of the danger of too quick theological non-negotiables.

It was good to hear scientists and religious thinkers serenely discussing such large questions, totally content that the truth would, indeed, make us more free. In a break in the proceedings, I asked Father Funes whether he thought that, if there was extra-terrestrial intelligent life, there might have been more than one incarnation? He hesitated to affirm that, noting that the coming together of the Second Person of the Trinity with an earthly body was a once and unrepeatable action. I came away pondering his answer but also wondering why—if there are other forms of extraterrestrial intelligent life, perhaps, given the longer time span of some of the other habitable planets, more intelligent and evolved than we—why only earthly humans would have been privileged with an incarnation? I also wondered about how we might think of sin in other planetary intelligent beings where, perhaps, there was no "original sin" from Adam! Perhaps all theology should humbly begin with the premise that we do inhabit a vast universe whose contours we yet barely know. Stoeger pointed us toward a new book by Thomas O’Meara O.P., Vast Universe: Extraterrestrials and Christian Revelation (Liturgical Press, 2012) to further pursue the theological implications raised by the newly formed science of astrobiology.

John A. Coleman
Show Comments (
2
)
Comments are automatically closed two weeks after an article's initial publication. See our comments policy for more.
Stanley Kopacz
8 years 3 months ago
Unless we develop some sort of warp drive or wormhole technology, I don't see us being able to prove the existence of intelligent extraterrestrial life one way or the other. And there's no indication, with present understanding of physics, that these are posiible, Of course, if even the simplest forms of life can be found to have developed elsewhere independently in our solar system, the chances for ET goes up considerably. If not in the solar system, then possibly spectroscopy of extrasolar planets may reveal a "Gaia" type planet. Anyway, a worthwhile quest. If extraterrestrial intelligent life IS contacted, we should treat it as a new revealing of what is hidden.
David Pasinski
8 years 3 months ago
I've met that fine "asteroid priest," Rev. George Coyne SJ, at his new digs at LeMoyne College in Syracuse and believe well worthy of an asteroid in his name. However, I hopeit will be a long, long time before he ever would crash or burn out here with his knowledge, enthusiasm, and faith. May the Star registry is next!