Why Are Catholic Funerals on the Decline? 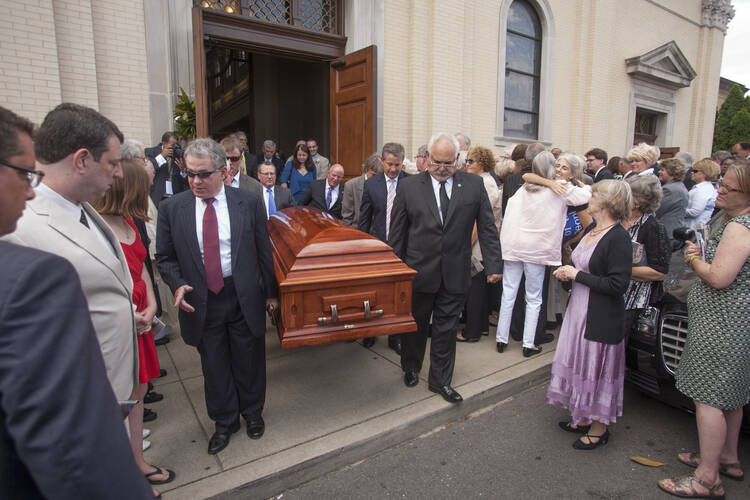 A new troubling trend marks the U.S. church: the decline in Catholic funerals. It will affect Catholic life in the future if a basic tradition dies out. It also affects pastoral life now if people deprive themselves of closure after the death of a loved one.

Those for whom funeral rites are not celebrated today have often been lifelong Catholics who presume their children will arrange a traditional funeral for them when they die. Some parents may want to alert offspring that they want a funeral Mass.

In 1970, according to statistics from the Georgetown University-based Center for Applied Research in the Apostolate (CARA), there were 426,309 Catholic funerals in the United States. More than 40 years later, in 2011, there were 412,145, a decrease despite an increased U.S. Catholic population over that time.

A funeral Mass brings the community together and unites people in prayer.

Msgr. Richard Hilgartner, former head of the Secretariat for Divine Worship at the U.S. Conference of Catholic Bishops and now a pastor in the Archdiocese of Baltimore, sees a problem for pastors.

The funeral Mass provides pastoral care and comfort for those who mourn so they can express their grief in light of their faith and find consolation in Jesus, Msgr. Hilgartner said in an interview with America.

“The rite of burial puts the death of a Christian in the context of the life of Jesus, which ultimately gives us hope,” he said.

A pastor from the Diocese of Brooklyn, N.Y., suggests that dioceses or clusters of parishes might meet with funeral directors to explain the theological, canonical and pastoral issues involved so the funeral directors can help families of the deceased understand the appropriateness of having the Mass of Christian Burial.

How have we come to this point?

Sometimes it is a matter of expense, though priests report that parishes will make adjustments when the expenses are church-related.

Another reason may be efficiency when funeral homes present themselves as full service providers. Some families can’t pay or object to the offering for a funeral Mass and funeral directors fail to inform them that the church will waive its fee, although they may still have to pay for the organist and a singer.

Diocesan regulations that remind mourners that the funeral Mass is not a venue for a memorial service and that limit eulogies also can be off-putting for some families.

More often, unfortunately, the children are not practicing Catholics and don’t see meaning in the Mass. Some have consciously left the church or no longer feel the cultural pull that exerted itself in the past even over marginal Catholics.

In other instances, especially when very old people have few living relatives, the family may feel embarrassed that the funeral will be in an empty church, though a funeral might be held in a smaller chapel instead if one is available.

Whatever the reasons for not having a funeral Mass these are better reasons for having one. Twenty-five years ago, in 1999, the now late Bishop Michael Saltarelli of Wilmington, Del., highlighted reasons in a letter to the diocese.

“The celebration of Catholic funeral rites promotes a healthy grieving process that can lead to deep levels of personal conversion and spiritual growth,” he wrote to his diocese. He said that “the avoidance of these funeral rites may short-circuit grief and healing.” He advised families that “the Eucharist helps to heal the sorrow that comes from the loss of a loved one.”

Most importantly, he said, “this may well be a special moment of grace for your family.”

Mary Ann Walsh
Show Comments (
2
)
Comments are automatically closed two weeks after an article's initial publication. See our comments policy for more.
Anne Chapman
7 years 12 months ago
Interesting. Although most know that marriages in the church are down, as are infant baptisms, probably few realize that funerals in the church are also down. The main complaints I hear are : no eulogies permitted, the family has minimal input to the liturgy - they cannot choose the readings or music that has the most meaning for the family, but must select from approved texts and music that may have no special meaning at all for the family. Even if they select from the approved list, the priest has the right to use something else if he wishes. There seems to be very little concern for the family. My biggest complaint in attending Catholic funerals is the coldness. The priest seldom actually knows the deceased and the family is strictly limited in what they may say about their loved one during "remarks" (no eulogies!) - the emphasis is to be on God not the beloved family member who has died. The priest's references to the family member who has died are often too pro forma, and even somewhat cold at times, and contain nothing that is of comfort to the family. I was horrified when a friend died - at 33 years of age. A young woman, a young wife, a friend, a daughter, a sister - taken too soon, a beautiful young woman who had endured 7 years of cancer and treatments with extraordinary grace and courage. The priest knew none of this, mentioned none of this, but he did remind everyone that she was a sinner. Fortunately, like the "good thief", by God's mercy she was probably going to take her place in heaven. I suppose he meant that to be reassuring. My husband and I weren't the only people there who were horrified.
Katherine Nielsen
7 years 12 months ago
My experience with Catholic funerals has been more positive. Usually the priest was well acquainted with the deceased, and personalized the rite while respecting the solemn character of what was happening. I'm sure it is harder in a more anonymous setting. People are often not aware of the options they have. The wake service or rosary which is usually held the evening before a funeral, is often more informal and spontaneous than the funeral itself. Eulogies may be done here, or just memory sharing. In fact I have often seen eulogies and memory sharing at the funeral, after the Mass is concluded and before the mourners process out. Though there are suggested Scripture readings, most priests are open to other scriptural texts if the deceased had a favorite passage. Readings from Kahlil Gibran or Walt Whitman, probably not so much. Though something like this could probably be used at the wake. Not only Catholic funerals are on the decline; there are more instances now where no funeral is held. Expense is a big part of it. A modest funeral with a burial can easily cost $15,000. This is a hardship for many families. A cremation can be done for under $1000, the family may opt for this, saying that they will have the memorial service "later". In fairness to the Church, most of these expenses are not related to having a Catholic funeral; it is the casket, embalming, services of the mortuary, cemetery plot, etc. People need to put their wishes in writing, and communicate with their families about what they want. If they anticipate that expense will be a problem, taking out a life insurance policy for this purpose is a prudent idea. Churches need to explore ways to help families who are burdened by the expense of a funeral. Perhaps low-cost columbariums on church property, to respectfully give ashes a final resting place. Maybe there are volunteers in a parish who would provide music without cost in instances where families can't afford musicians. As this article suggests, parishes can point out the ways in which a Catholic funeral is a healing and appropriate way to honor the beloved dead, and pray for the repose of their souls.