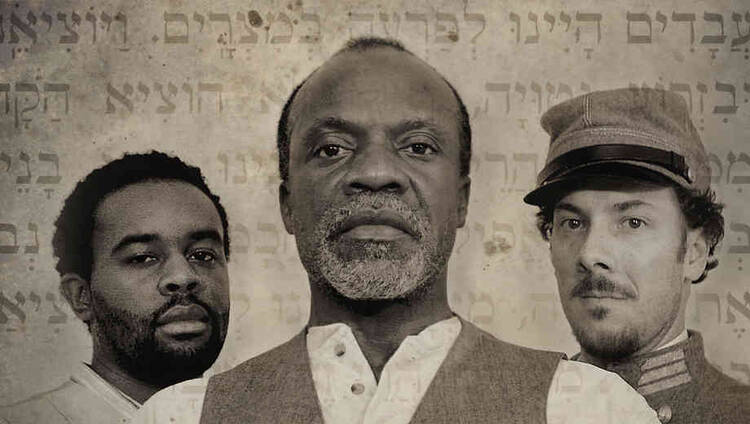 The Marin Theatre Company in Mill Valley has mounted the west coast premiere of Matthew Lopez's play, "The Whipping Man." The play won the 2011 John Gassner new play award from the New York Outer Critics' Circle. It played there at the Manhattan Theatre Club. It is set at the end of the Civil War. Caleb DeLeon of Virginia has returned home to Richmond to his ruined and plundered mansion. He seems to have deserted and arrives home with a vicious gun wound in his leg, filled with gangrene. He is Jewish. He finds two former slaves of the family still haunting the old, ruined mansion: Simon and John. Although now freedmen, they are forced to care for the wounded Caleb whose leg they amputate. Caleb has a hard time realizing that these, his former slaves, are now free.

Many might be surprised that Jews in the confederacy held slaves. But then so did Jesuits in Maryland! In the play, the DeLeons were—relatively—friendly to their slaves who were house slaves and not plantation workers. Ironically, they raised their slaves to be Jewish. This is the nub of the play. Simon is more devoutly Jewish than Caleb, embittered and broken by the war he fought on the South's side. John who had been something of a playmate of Caleb as a young man remembers with bitterness being taken by Caleb's father to the infamous "whipping man" who thrashed with a brutal whip slave boys or others who got out of kilter. Although I did not see any whipping in the play, I was reminded of the gruesome scenes of  the whipping of slaves in the movie, "Django Unchained." We discover that Caleb as a boy had been taken by his father to the whipping man when John was tortured by the whip. At one point, the two who previously seemed friends of sorts came to a serious divide. Caleb asked to take the whip and plied it on his young black playmate (spoiler alert: later in the play we discover that they are half-brothers!).

In the course of hiding out in the ruined mansion and looting nearby abandoned mansions for food and other sources of wealth, the three decide to celebrate the Passover seder. Lincoln has just emancipated the slaves and Union troops have come to take over Richmond. There is a poignancy in the question from Passover: "Why is this year different than others?" In the text of the play, in enacting the seder meal, Simon asks: "Why on this night do we eat only bitter herbs?" To which John responds: "To remind us of the bitterness of slavery. As if we needed reminding!" Simon then says: "Your children will. And their children will. We must not forget."

Seeing the play so close to Passover (a week later), I was deeply touched by the imagery of Passover (which Christians take up, in Holy Week, to evoke the new Passing Over to freedom through the death and resurrection of Jesus). It was also ironic to me that so much of the imagery in Negro spirituals draws on the motifs of the Exodus, the freeing from the slavery in Egypt. As the play unfolds, we discover that Caleb's father has sold off into slavery in another part of the state the wife and daughter of Simon to gain some much needed money. Simon was staying around in the ruined mansion waiting for them to return and trusting the DeLeon patriarch to do good rather than evil. We also discover that Caleb has impregnated Simon's daughter and she is carrying his child. Caleb claims to Simon that he loves Sarah but Simon rejoins: "Love. Like you might love a dog of yours. Something you own!"

The stellar production moved me deeply. It reminded me how often slavery and war warp even good men's souls. The play program included a letter written by a former slave to his former master, Colonel P..H. Anderson of Big Spring, Tennessee. Anderson had requested Jourdon Anderson, his former slave, to return to Tennessee to work for him now as a freed former slave. I want to cite the letter in part for the ways it reminds us how war and slavery warp the souls of men. Jourdon notes in the letter that Anderson shot at him twice before the slave left to emigrate to Ohio where he was then living. He also recounts some war savagary that Anderson engaged in during his time in the Confederate Army:

I want to know particularly, what the good chance is you propose to give me. I am doing tolerably well here. I get twenty-five dollars a month, with victuals and clothing; have a confortable house for Mandy—the folks here call her Mrs. Anderson—and the children—Milly, jane and Grundy—go to school and are learning well. The teacher says Grundy has a head for a preacher. They go to Sunday school and Mandy and me attend church regularly. We are kindly treated...

As to my freedom, which you say I can have, there is nothing to be gained on that score, as I got my free papers in 1864 from the Provost-Marshall-General at the Department of Nashville. Mandy says she would be afraid to go back without some proof you were disposed to treat us justly and kindly; and we have concluded to test your sincerity by asking you to send us our wages for the time we served you.. We trust the good Maker has opened your eyes to the wrongs which you and your fathers have done to me and my fathers, in making us toil for you for generations without recompense. Here I draw my wages every Saturday night; but in Tennessee there was never any pay-day for the negroes any more than for the horses and cows. Surely there will be a day of reckoning for those who defraud the laborer of his hire.

In answering the letter, please state if there would be any safety for my Milly and Jane who are now grown up and both good looking girls. You know how it was with poor Matilda and Catherine. I would rather stay here and starve—and die, if it come to that—than have my girls brought to shame by the violence of wickedness of their young masters. You will also please state if there has been any schools opened for the colored children in our neighborhood. The great desire of my life now is to give my children an education and have them form virtuous habits.

We are led to ask why a slave would ever choose to stay with his former master, even one who was—relatively—kind. We are also led to ask about the meaning of Passover for and in our own time. A powerful play, superbly acted, I came away ringing with many questions about faith.