Where were the voting women at the Synod?

Where were the voting women at the Synod? 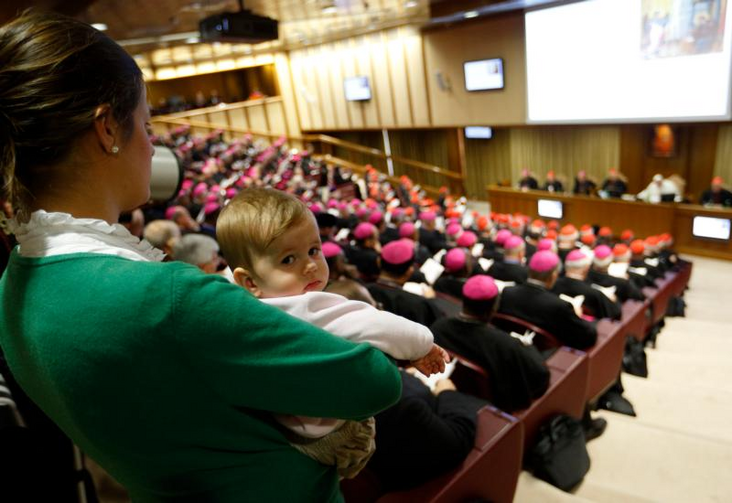 To my mind, the Synod on the Family, no matter what the outcome of the Synod’s final report, or the Pope’s final statement, has been a resounding success. The assembled participants have had the chance to discuss some of the most important issues facing the church, and the discussions have been open, transparent and free. Thus, it has been a great success, and betokens still more openness in the future. Pope Francis has given the church a gift with this synod.

But this morning something very disturbing was revealed, thanks to a perceptive question by Thomas J. Reese, S.J., former editor in chief of America and currently a columnist for the National Catholic Reporter. Brother Herve Janson, a member of the Little Brothers of Jesus, an order noted for its poverty and simplicity, was one of the participants at the daily press briefing. It was noted that he was also a voting member.

What does that mean? Basically, Brother Janson is not ordained. Some may not be aware of this tradition, but you can be a member of a men’s religious order and not be ordained: thus the term “Brother.” Brother Janson is neither a bishop, nor a priest, nor a deacon. Technically, his canonical “status” in the church is that of a layman. That is, he has the same “status” as that of a woman religious, or in common parlance, a Catholic sister. And the same status as a laywoman as well.

In response to Fr. Reese’s question, which produced some uncomfortable laughter from the other panelists (who immediately grasped the challenging nature of the question): Brother Janson said (my translation from the French): “That is a big question….I felt very uncomfortable (malaise)….Before, the distinction was between cleric and lay. And now, it became between man and woman, exactly as you said very well….I asked myself the same question.” Strikingly, Brother Janson said he thought of refusing (renoncer) the invitation to be a voting member, out of solidarity with women religious. (This exchange can be viewed at 42:00 in the video below.)

This is a serious failure for the Synod. Previously, at least as far as I had known, it seemed that ordination was a prerequisite for voting. That is, there were priests who were appointed, in addition to the bishops, as voting members. There were strong theological arguments that could be advanced for that: it was a synod of bishops, and, in Catholic theology, priests participate in the ministry of the bishop through the sacrament of holy orders.

Now, it seems that the prerequisite for being a voting member was not ordination, but being a man.

It would have been extremely easy for the synod to have invited—as it did with Brother Janson—a Catholic sister to participate in the Synod, with voting rights. Perhaps the head of a women’s religious order could have been invited, or a woman religious who worked in the Vatican, or a woman religious who had experience in the theology of family life. It would also have been easy (since Brother Janson is a layman) to invite another layman or a laywoman to vote.

For me this is the worst kind of sexism. It goes against the pope’s explicit desire to have more women in “leadership roles” in the church, as he said in "Evangelii Gaudium": “We need to create still broader opportunities for a more incisive female presence in the Church.” (10).

It is also, to use some theological language, a sign. The church teaches, as Jesus did, by both word and deed.  The “sign value” of having a voting member who was a woman—even one—would have been immense.  It was a huge missed opportunity.

Finally, while some may dismiss my comments as off topic, the decision to not to include women has to do with the family. Sexism is something that many, if not most, of our mothers, daughters and sisters have to deal with. The last thing the synod should have been doing is creating more problems for the members of our family.