What to Hope for in Pope Francis' First Encyclical 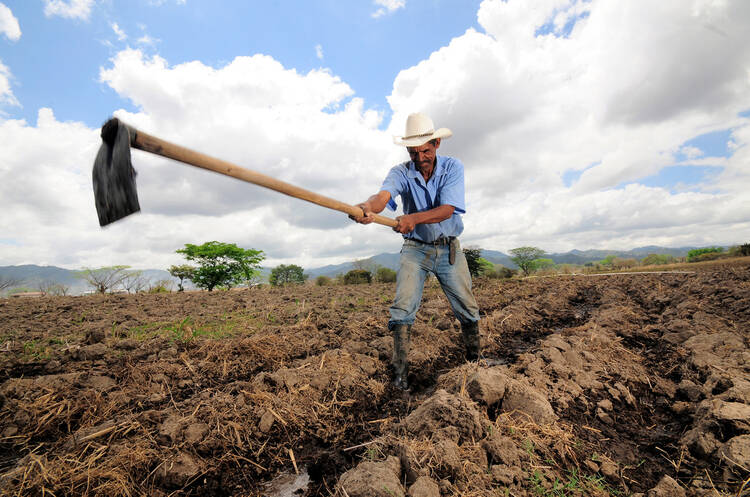 The Vatican, through the pope's press spokesman, announced that Pope Francis is working on his first encyclical, dealing with the environment. Not surprising that he chose this topic since it is a theme he has often broached. On March 16, 2013, Francis stated he chose the name of Francis of Assisi because: "for me, he is the man of poverty, the man of peace, the man who loves and protects creation. These days we do not have a very good relationship with creation, do we?"

In his first homily as pope, Francis said:

"Let us protect Christ in our lives, so that we can protect others, so that we can protect creation. The vocation of being a protector, however, is not just something involving us Christians alone; it also has a prior dimension which is simply human, involving everyone. It means protecting all creation; the beauty of the created world as the Book of Genesis and as Saint Francis of Assisi showed us. In the end, everything has been entrusted to our protection. Be protectors of God's gifts. I would like to ask all those who have positions of responsibility in economic, political and social life, and all men and women of goodwill: let us be 'protectors' of creation, protectors of God's plan inscribed in nature; protectors of one another and of the environment. Let us not allow omens of destruction of earth to accompany the advance of this world!"

Francis links an option for the earth with an equally strong option for the poor—since, in many ways, the poor suffer the worst effects of global climate change and ecological destruction. That same nexus between an option for earth and the poor can be found in the magisterial account of Catholic Social Teaching by Donal Dorr, Option for the Poor and For the Earth: Catholic Social Teaching (Orbis Books, 2012) and by the work of Leonardo Boff, Cry of the Earth, Cry of the Poor (Orbis Books, 1997). The pope's biographer, Paul Vallely reported that Francis contacted Boff, the Brazilian liberation theologian and former Franciscan, for advice on this new encyclical.

In what is perhaps his most powerful environment-themed address, Francis issued a sober challenge on June 5, 2013, in connection with World Environment Day. He said: "We are losing the attitude of wonder, contemplation, listening to creation. The implications of living in a horizontal manner is that we have moved away from God, we no longer read his signs."

"I wish to mention another threat to peace, which arises from the greedy exploitation of environmental resources. Even if 'nature is at our disposition,' all too often we do not 'respect it or consider it a gracious gift which we must care for and set at the service of our brothers and sisters, including future generations.' Here too what is crucial is our responsibility on the part of all in pursuing policies respectful of the earth which is our common home. I recall a popular saying: 'God always forgives, we sometimes forgive but when nature-creation—is mistreated she never forgives.'"

Francis echoes some of the teaching of Pope Benedict XVI, especially in references to a 'grammar' of ecology. Those wanting to read the many statements of Francis on the environment, can look to "Pope Francis on Care for Creation," found on the website of Catholic Climate Covenant.

Of course, both John Paul II and, especially, Benedict XVI have already laid important groundwork for Catholic thought on the environment. Benedict's hard hitting World Day of Peace address in 2010 and his papal encyclical, “Caritas en Veritate,” were the strongest papal teachings on the environment to date. Indeed, Benedict was often hailed as 'the green pope.' Nevertheless, both John Paul II and Benedict remained, in many ways, overly anthropocentric in their teaching. In a fascinating article, "The Fragile World: Church Teaching on Ecology Before and By Pope Francis," which appears in the online British Jesuit journal, Thinking Faith, Donal Dorr reviews carefully Catholic social teaching on the environment as found in the teaching of John Paul II, Benedict XVI and the statements thus far by Pope Francis.

Both John Paul II and Benedict XVI made somewhat overly sharp distinctions between what they called "human ecology" and "natural ecology.” While Benedict insisted on a link between the two, he tended to hold that the former is 'more serious' and should be given priority. As Dorr notes in his article: "Benedict warned of the danger of seeing nature as more important than humans and seemed to be unduly concerned about the dangers of 'neo-paganism and a new pantheism.'"

There are two pitfalls in trying to contrast 'human ecology' and ‘natural ecology.' The first is found among those who so stress the continuity in molecular matter between humans and their environment (materialists and/or those who see an evolution without God) that they assert that any attempt to claim a special status for humans as the image and likeness of God is a form of what they call "species-ism." This is the position of the Australian ethicist Peter Singer, for example. A second pitfall (more likely found among religious thinkers) is to so exalt the special character of humans as to neglect the ways we have evolved with and depend for our survival on other species or to assume that a glacier or a polar bear or a barrier coral reef is not, also, in some sense made in the image and likeness of God.

In his apostolic letter, “Evangelii Gaudium,” Francis speaks of "whatever is fragile, like the environment, is defenseless before the interests of a deified market." In the same document he says:

"There are other weak and defenseless beings who are frequently at the mercy of economic and indiscriminate exploitation. I am speaking of creation as a whole. We human beings are not only the beneficiaries but also the stewards of other creatures. Thanks to our bodies, God has joined us so closely to the world around us that we can feel the desertification of the soil almost as a physical ailment, and the extinction of a species as a painful disfigurement. Let us not leave in our wake a swath of destruction and death which will affect our lives and those of future generations."

Francis then goes on to say: "Small yet strong in the love of God, like Saint Francis of Assisi, all of us, as Christians, are called to watch over and protect the fragile world in which we live, and all its peoples."

Dorr goes on to say that John Paul II and Benedict tended to use the term "human ecology" in an overly restrictive way (not in the way it is used in social science), which did not give sufficient weight to the fact that "humans are one part of the ecology of nature." He sees some indications that the thinking of Pope Francis is different:

"Rather than contrasting 'human ecology' with 'natural ecology,' he has on several occasions made a very close link between exploited people and the exploited environment, describing both of them as 'fragile' or 'defenseless.' My hope is that, in the encyclical he is working on, he may not use that term 'human ecology'; however, if he chooses to use it, I feel confident that he will give it the wider meaning it has in the social sciences. It would mean the pope would be situating us humans and our relationships within the context of our diverse social and cultural environments and, more especially, of our situation as an integral part of the whole evolving natural order."

John A. Coleman
Show Comments (
1
)
Comments are automatically closed two weeks after an article's initial publication. See our comments policy for more.
Vincent Gaitley
8 years 8 months ago
The third pitfall of trying to contrast human ecology and natural ecology is the academic error that all ideas are equal and are worth discussing or comparing. I sure hope the pope does not go silly green in this encyclical--theology is the business of encyclicals, not ecology.