What Critics Get Wrong About the Significance of Vatican II 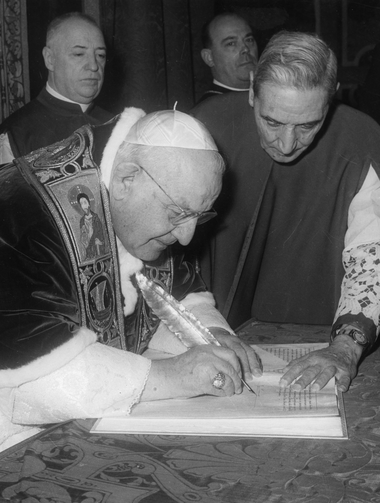 French Cardinal Jean-Louis Tauran opened a four-day conference at Georgetown University Thursday celebrating the 50th anniversary of the Second Vatican II quoting the late French President Charles de Gaulle. Reflecting on the significance of the council, the cardinal recounted, the general told the apostolic nuncio to Paris, the council was “the most important event of the century, because you can’t change the prayer of a million men and women without affecting the balance of the planet.”

“Without pronouncing dogmatic sentences,” the cardinal said, “the Second Vatican Council expressed its teaching on many questions which occupy the conscience and activity of man.”

Currently president of the Pontifical Council for Interreligious Dialogue, Cardinal Tauran noted that the council fathers “learned to look with benevolence at others that belong to different religious traditions or who are agnostic.”

He added, “For the first time, Catholics were called to develop friendly relationships with non-Catholic Christians, and for the first time the magisterium of the church recognized that there are elements of truth in other religions.”

“Very few themes of the council seem to be quite as important today,” he stressed, as the need to know and understand other religions, especially Islam. “[T]o protect for all men (sic) social justice, moral, values, peace and freedom,” he urged, “we must come to know Muslims and understand their culture.”

To the question, how the Second Vatican Council should be characterized, he answered, “Vatican II is a great theological council with strong focus on the church.” Behind the cardinal’s diplomatic wording was the allegation from the council’s critics that as a pastoral council, Vatican II was not nearly as significant as the dogmatic councils of the past with their definitions and anathemas.

“If, indeed, we look at the number and importance of Vatican II’s teachings,” Father O’Malley said, Vatican II is not Council Lite but the very opposite.” He went on then to identify the council’s teaching. Among those he listed were:

These teachings are not constitutive doctrines, like the Trinity and Incarnation, “but they are nonetheless,” said O’Malley, a historian of both the Council of Trent and of Vatican II, “truths of the utmost importance for understanding…what it means to be a Christian in the world today.

Contrasting the pastoral teaching of Vatican II to the doctrinal definition found in Trent’s decree on justification, the Jesuit historian said, “a decree on profound mystery can be intellectually satisfying…. But that means it is complex and lacking in rhetorical punch.”

That the failed effort to formulate a Profession of Faith of the Council of Trent ended in a vacuous formula—“I embrace and accept all the articles defined and declared by the Most Holy Synod of Trent”—Father O’Malley pointed out, reveals the deficiency of a purely doctrinal approach to conciliar teaching. Of the failed Profession of Faith, he told the audience, “That’s right: the decree was pastorally untranslatable.”

Drew Christiansen, S.J.,the former editor of America, is a distinguished professor at Georgetown University. He also served on the planning committee for the conference “Vatican II: Remembering the Future.”

Drew Christiansen
Show Comments (
1
)
Comments are automatically closed two weeks after an article's initial publication. See our comments policy for more.
Henry George
5 years 7 months ago
Vatican II has to be judged by what it hoped to accomplish and what it actually accomplished. Perhaps it was the 1960"s, perhaps it was the dramatic growth in material wealth and the lessening of the chance that one might suddenly die, but Catholics left the Church after Vatican II and the emptiness in the pews cries out to heaven. Undoubtedly the Liturgical Reforms that Vatican II brought to culmination could have been implemented in a more compassionate and prudent manner. Alas, the "Rigid/Uniformiastic" Pre-Vatican II Church structure, that Bishops and Pastors unfortunately followed in their implementation of the "Reforms of Vatican II", allowed little room for the Spirit to remain in the hearts of those who did not want to give up the "Latin Mass" who did not want all the statuettes of their favourite saints removed from the Churches, who did not find their faith increasing as they sang 60"s folk songs and did not approve of drum sets being placed in the sanctuary. The Church should have allowed the "People of God" to vote with their feet as to what sort of Liturgy they wished to attend be it the Old, the New or a mix of Both - instead it forced the changes upon the faithful and the faithful responded by leaving the Church in droves. As for understanding the Muslims - the more radical of them are determined to eliminate Christianity from the face of the Earth. How can anyone judge Vatican II as anything but a massive failure of well intentioned, but somewhat naive and poorly timed, prelates ?