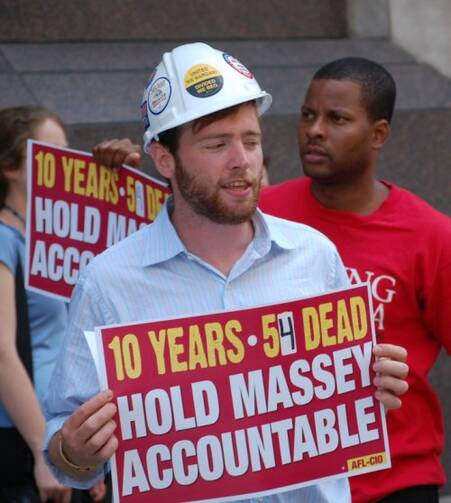 In 2010, 29 miners were killed in a horrific underground explosion at West Virginia’s Upper Big Branch Mine. Underground mining is one of our nation’s most dangerous occupations, and such disasters are all too frequent. But this one is different, and not simply for the enormity of the tragedy. In a remarkable turn of events, Massey Energy C.E.O. Don Blankenship was found guilty of conspiring to violate mine safety standards.

Too often, when workers are hurt or even killed on the job, the firms responsible get off with a small fine. Supervisors seldom face criminal charges, and it’s exceedingly rare for corporate officers to stand before a jury. But it’s those in the corner office who have the power to decide if employees are valued partners to be protected or just another cost of production.

In discovery, prosecutors made this abundantly clear. Mr. Blankenship demanded production reports from his mines every half-hour and wanted nothing to interfere with the speed of the work. The company did not allow safety regulations to get in the way of profits, using elaborate schemes and code words to keep one step ahead of surprise inspections by mine inspectors.

Each year, about 4,500 American workers die from workplace injuries. Perhaps 10 times that number die from cancers, respiratory diseases and other illnesses caused by long exposure to hazardous working conditions. Mr. Blankenship’s conviction for evading safety regulations is only a misdemeanor, but it’s a step forward to see any indication that Workers’ Lives Matter.

Clayton Sinyai
Show Comments (
1
)
Comments are automatically closed two weeks after an article's initial publication. See our comments policy for more.
Brian McDonough
6 years 12 months ago
If you want to read how mainstream Francis's Social Worker Rights advocacy is, as are other Popes, consider reading the 600+ page text, "PAPAL TEACHINGS ON ECONOMIC JUSTICE," which is found at the very, very bottom of this page on the wed site of the Conference of Major Superiors Of Men: www.cmsm.org/CMSM_Alert/Apr10/ The Conference of Major Superiors Of Men published the text online here: www.cmsm.org/documents/PapalTeachingsonEconomicJustice.pdf If you want to read how Biblically mainstream Francis's Social Justice Writings are, consider watching and listening to the following 4 YouTube videos which have musical accompaniment: https://www.youtube.com/user/Matthew192124 Francis is as Communist, Marxist, Liberal and Progressive as the Old Testament, the New Testament and at least 9 Popes before him.