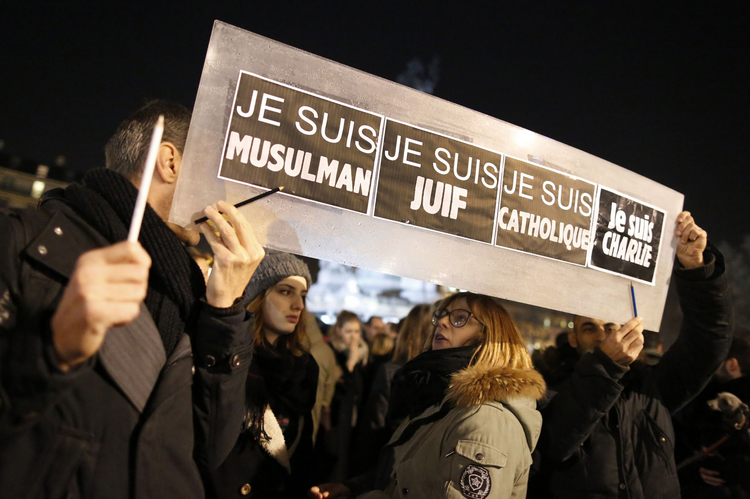 In an op-ed defending PEN American Center’s choice to give the French satirical publication Charlie Hebdo an award for courage in free expression, the president and executive director of PEN praise “Charlie Hebdo’s bravery in defending the right to be disrespectful.”

The right to disrespect; the wish to be respected. The first is a Western demand; the second is what I imagine most Muslims in the world—most people in the world—seek in their relationships with others. Our rights are protections, privileges and freedoms guaranteed by law; respect is personal and prior, fundamental to our sense of comfort with ourselves and with others. Respect, dignity, honor, are not especially important values in the West these days, certainly not in the United States, which may cause us to discount how important they are to others.

When Islamic extremists killed a dozen people at Charlie Hebdo in January after it published cartoons of Muhammad over protests from the Muslim community in Paris, the attack was widely covered in the U.S. media. PEN’s decision to give the PEN/Toni and James C. Godale Free Expression Courage Award to Charlie Hebdo this week has refocused attention on the publication of the cartoons and stirred debate. It caused some writers to withdraw from the awards ceremony in protest. The reasons they cite and PEN’s response to them raise interesting and complex issues – about free speech, about power, privilege and politics, about cultural values and sensitivities, about sacrilege and subtext.

Both sides of the question agree on many points: they uphold the importance and, indeed, (though they don’t use the word) the sacredness of free speech, they condemn the murders of Charlie Hebdo staff by Islamic extremists, they assert disapproval of anti-Muslim prejudice. But PEN officials and the writers supporting them see Charlie Hebdo’s cartoons as defending the far boundaries of free speech whereas some of the dissenters view the cartoons, and PEN’s award to Charlie Hebdo, as an opportunistic exploitation of nationalistic and anti-Muslim views widely popular in the West.

In her long and nuanced dissent from PEN’s decision to award Charlie Hebdo a prize for courageous self-expression, writer Deborah Eisenberg points out that while Charlie Hebdo calls itself an equal opportunity offender in satirizing religion, certain expressions of anti-Semitism are outlawed in France, which means that Judaism is effectively out of bounds for satire, leaving only Christianity and Islam as subjects to be lampooned. But those two religions have very different histories in France, she observes.

“Catholicism in its most regrettable European roles represents centuries of authoritarian repressiveness and abuse of power, whereas Islam, in modern Europe, represents a few decades of powerlessness and disenfranchisement,” Eisenberg writes. They are not equal targets, she asserts. Even if the cartoons of Muhammad were not expressly designed to humiliate a marginalized population, that is their effect. In publishing them, Charlie Hebdo was appealing to anti-Muslim sentiment in France and mocking those members of society least able to defend themselves.

Though supporting Charlie Hebdo’s right to publish them, Eisenberg calls its cartoons of Muhammad brainless, reckless and provocative, an expression of obsolete and misconceived anti-clericalism. There is a critical difference between defending offensive speech and applauding it, she writes. If courage in expression is to be measured by its offensiveness, as PEN’s award to Charlie Hebdo for courage in expression seems to suggest, fraternities in this country that utter racist slogans or vandals who scribble anti-Semitic graffiti on Jewish graves would also be appropriate recipients. Indeed, more appropriate. PEN is an American organization, so why give a prize to a foreign publication when so many egregious examples of offensive speech exist here at home?

The initial response to Eisenberg’s letter by Suzanne Nossel, the executive director of PEN American Center, puts PEN’s decision to honor Charlie Hebdo in the context of efforts by many governments and individuals to ban insults to religion as hate crimes and the resistance to this by the Obama administration (in which Nossel served) and other Western governments. “The idea that no words, no matter how offensive or insulting, can ever justify violence seems basic to us here, but is honored in the breach in many parts of the world,” she writes.

Hate speech laws in some European countries raise questions about how completely Western societies themselves uphold the inviolability of free speech. Journalist Glenn Greenwald points out that “free speech, in the hands of many westerners, actually means: It is vital that the ideas I like be protected and the right to offend groups I dislike be cherished; anything else is fair game.” In France, where world leaders joined a rally for free speech following the terrorist attacks in January, the French government charged the controversial French comedian Dieudonné with supporting terrorism for saying in a Facebook posting “As far as I am concerned, I feel I am Charlie Coulibaly,” a reference to both Charlie Hebdo and Amedy Coulibaly, one of the gunmen in the attack. Dieudonné was the most high-profile arrest; France arrested dozens others for making statements that the government said condoned terrorism.

In their op-ed published May 2 in the New York Times, Nossel and Andrew Solomon, president of PEN American Center, call attention to the value of satire. They assert they don’t believe the cartoons of Muhammad are hate speech and observe that Charlie Hebdo’s murdered editorial director, Stéphane Charbonnier, said he “aimed to ‘banalize’ all areas of discourse that were too fraught to discuss” until they could be. This had been achieved with Catholicism and they write he wanted to do same with Islam.

Is banalizing Islam something we should want for Muslims? Even if it is, isn’t that something that should be left to those who belong to the culture rather than imposed on them by outsiders? Do Muslims simply need to develop a thicker skin, as Charbonnier suggested, or is there something suspect about efforts by Westerner to aggravate them until they do?

As the dissents to the award and even the supporting statements suggest, there is nothing simple about the Charlie Hebdo fracas, either the publication of the Muhammad cartoons or PEN’s decision to honor it. The popular view of Charlie Hebdo as a gutsy little publication bravely taking on Islamic extremists is a story line everyone can follow. It’s a good story; it’s even a true story, but there are layers and layers to the story that are missed if Charlie Hebdo’s Muhammad cartoons are isolated from the context of French history and politics and the magazine’s war against religion. (Charbonnier’s actual words, not mentioned in the May 2 op-ed, were: “We have to carry on until Islam is rendered as banal as Catholicism.”) Good writers are good readers, and the objections raised to PEN’s award by dissenting writers offer a rich and complex interpretation of the politics involved, including PEN’s own motives in trying to enhance its standing by capitalizing on Charlie Hebdo’s popularity with the public.

The violence that occurred in Texas this week where a cartoon contest depicting the prophet Muhammad drew two Muslim gunmen who were killed by police offers a dark twist on the Charlie Hebdo story. The contest was presented as a response to the attacks on Charlie Hebdo and organized by Pamela Geller, a political commentator and blogger known for her vitriolic anti-Muslim views. Geller said she plans to organize other such events. Inciting violence, then taking refuge in her right to free speech, Geller is gaming the system to her advantage and for her own discreditable purposes. Her use of cartoons is a more disturbing case than Charlie Hebdo’s. One can acknowledge she has a right to free expression, but an effort to provoke Muslims to violence in order to fan hostility against them offers little to respect.