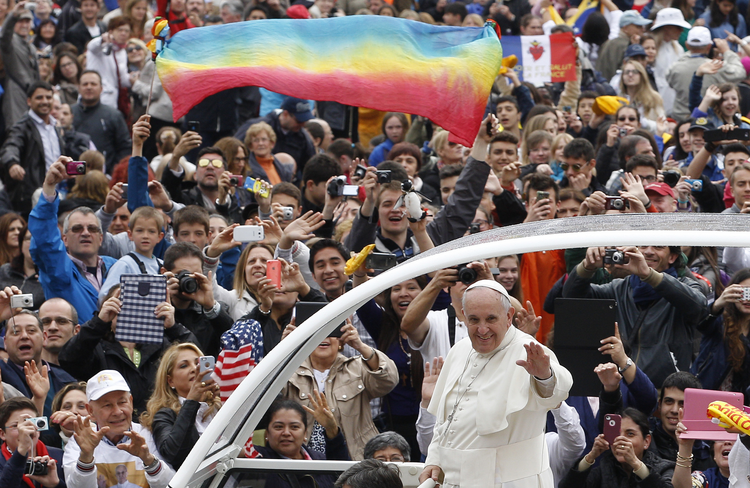 Reports that Pope Francis told an Argentine woman civilly married to a divorced man that she can receive Communion "cannot be confirmed as reliable," said Jesuit Father Federico, the Vatican spokesman.

Julio Sabetta, 50, wrote on his Facebook page that Pope Francis phoned his wife, Jacquelina Lisbona, on April 20 at their home in Argentina, identifying himself as "Father Bergoglio." He said he was calling in regard to a letter she had written him last September about not being able to receive Communion because Sabetta was divorced.

Media in Argentina, Italy, England and then all over the world picked up the story based on Sabetta's claim that his wife told him Pope Francis told her she could receive Communion, although her parish priest had told her that was not possible unless Sabetta received an annulment and the two married in the church.

Basilian Father Thomas Rosica, who is serving as an assistant to Father Lombardi, told reporters on April 23 that Pope Francis had phoned Lisbona, but said the content of the conversation was private.

Father Lombardi, in his formal statement on April 24, said the pope often phones people, but since the calls "do not in any way form part of the pope's public activities, no information or comments are to be expected" from the Vatican press office.

"That which has been communicated in relation to this matter," he said, and its "consequent media amplification cannot be confirmed as reliable and is a source of misunderstanding and confusion."

While Pope Francis has made it clear the church should find a pastoral approach to helping divorced and remarried Catholics, he has said any decisions on how to handle such situations would have to be discussed by the Synod of Bishops, which will meet in October and again in 2015.

"Consequences relating to the teaching of the church are not to be inferred" from anything the pope may have said to Lisbona, Father Lombardi said.

Catholic News Service
Show Comments (
2
)
Comments are automatically closed two weeks after an article's initial publication. See our comments policy for more.
kenneth briggs
6 years 10 months ago
As archbishop of Bueonos Aires, Msgr. Bergoglio regularly permitted divorced and remarried congregants to receive communion in the poor parishes of the city where he said mass, according to evidence in Paul Vallely's biography of the pope, "Untying the Knots," though a rationale apparently wasn't addressed openly. A close priest associate is quoted to the effect that restricting communion would have been contrary to the welcome accorded poor people.
Michael Barberi
6 years 10 months ago
This is not surprising but a cause for much hope for the divorced and remarried Catholics worldwide. What Pope Francis has done, if we believe what has been reported, is not dissimilar to the pastoral practices of many priests. The book is not closed forever on such teachings but open to development, in particular in the pastoral application of the moral norm. Below is an part of a recent speech given by Cardinal Walter Kasper, prefect emeritus of the Pontifical Council for Promoting Christian Unity. You can read the entire article at: http://www.ncregister.com/daily-news/cardinal-kaspers-speech-on-divorce-remarriage-and-communion/. Noting that the Congregation for the Doctrine of the Faith in 1994 wrote that those who are divorced and remarried can make an act of spiritual communion, he asked, “Why, then, can [such a person] not also receive sacramental Communion?” He claimed that, in the early Church, when someone entered a new relationship even though their spouse was still alive, “after a period of penance, had available … a life raft through admission to Communion.” Suggesting a “way of conversion” involving the sacrament of confession, he asked, “Is it also the path that we could follow in the present question?” When someone who is divorced and remarried “repents of his failure in the first marriage”; if he cannot return to the first marriage; if he “cannot abandon without further harm” the responsibilities of his second marriage; if “he is doing the best he can to live out the possibilities of the second marriage on the basis of the faith and to raise his children in the faith”; and if “he has a desire for the sacraments as a source of strength in his situation,” Cardinal Kasper said, then “should we or can we deny him, after a period of time of a new orientation (metanoia), the sacrament of penance and then of Communion?” He clarified that this is not “a general solution,” but is “the narrow path of what is probably the smaller segment of the divorced and remarried, those sincerely interested in the sacraments.” “Life is not just black or white; there are, in fact, many nuances.” Cardinal Kasper emphasized the need for “discretion, spiritual discernment, sagacity and pastoral wisdom” in these cases. “This discretion is not an easy compromise between the extremes of rigorism and laxity, but, as is every virtue, a perfection between these extremes.” Let us pray that the Synod on the Family will follow both Pope Francis and Cardinal Kasper's reflections.