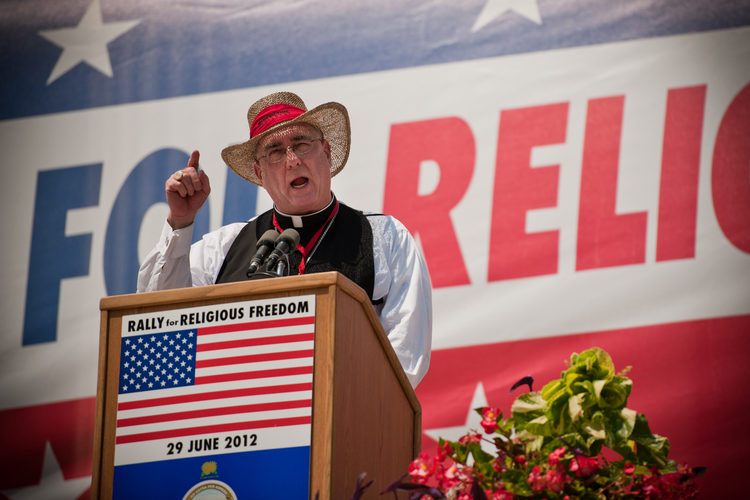 With the Hobby Lobby case over, U.S. Catholic bishops are now holding their breaths to see if the ruling will prove a hollow victory or extend to lawsuits brought by religious non-profits.

Archbishop Joseph F. Naumann of Kansas City, Kan., a member of the U.S. bishops' Secretariat for Pro-Life Activities, told America in a telephone interview that he believed the 5 to 4 ruling of the U.S. Supreme Court was a temporary gain.

“With others, I’m encouraged that the majority of the court ruled in favor of Hobby Lobby,” Archbishop Naumann said. “That said, it saddens me that it wasn’t a 9-0 decision.”

In the 49-page majority opinion written by Justice Samuel Alito, the court ruled Monday that the Health and Human Services preventive services mandate in Obamacare violates the Religious Freedom Restoration Act as applied to employers, insofar as it would compel them to provide insurance coverage for drugs and devices that violate their religious beliefs on human life.

But while the ruling protected conscience rights for private companies and individuals, it did not apply to religious non-profits like the Little Sisters of the Poor and other Catholic groups now suing the Obama Administration for similar protections. Catholic charities, hospitals and schools remain unaffected.

“I think one of the lingering concerns is whether this decision will translate to our religious ministries, which the Administration has defined as not religious enough to receive an exemption,” Archbishop Naumann told America. “The court decision today doesn’t tell us whether what the government claims to be an accommodation pertains to religious ministries as well as to private employers. I don’t think we know that at this point.”

He added, “I think it’s encouraging, but one would think that if they would defend the conscience rights of individuals, that that also would transfer to ministries that are actually part of the church.”

If and when the court finally takes up the non-profit cases in a separate ruling, the archbishop noted that only one vote will need to change for the decision to go the other way.

"My misgivings come from the narrow margin of victory we’ve seen on this court," Archbishop Naumann said. "Just one vote on that court going the wrong way could change things.”

In particular, he said the bishops were still worried the Obama Administration would succeed in getting Catholic non-profits to pay for abortion-causing drugs indirectly through insurance providers, an apparent accommodation often floated in discussions.

“To us, that’s all a shell game because our insurers are paying for it and they get that money from us,” Archbishop Naumann said. “So we don’t think the accommodation is real."

Cardinal Sean O’Malley, O.F.M. Cap., of Boston, also a member of the Secretariat for Pro-Life Activities, said he was grateful the decision protected conscience rights for businesses.

However, Cardinal O’Malley also acknowledged that the court’s ruling did not apply to church non-profits, leaving some of the U.S. bishops’ concerns unresolved.

“It is our sincere hope that the Administration will take the necessary action to protect religious organizations' ability to serve the public interest and the guarantee of freedom of religion,” Cardinal O’Malley told America in a statement from Rome.

Cardinal O’Malley, who is in Rome this week for a meeting of the committee of eight cardinals that advises Pope Francis, is widely considered to be the U.S. bishop closest to the Holy Father.

He said the Hobby Lobby ruling “highlights the importance of focused attention on the need for these organizations not to be forced to choose between their service to American society and adherence to a mandate that violates their principles.”

Nevertheless, the cardinal added that the ruling “does not address the full range of challenges the HHS mandate poses for religious organizations.”

On Monday, reactions from other members of the U.S. bishops' pro-life secretariat were likewise mixed, with positive feelings muted in some quarters by a wait-and-see attitude regarding the ruling's impact on non-profit cases.

In a statement emailed to America, Bishop Felipe Estevez of St. Augustine, Fla., called the ruling “a victory for all citizens in our great society.”

“Catholics have long advocated for accessible and life-affirming health care for all citizens,” Bishop Estevez told America. “People of many faiths are standing together in solidarity. This HHS mandate penalizes us and others, who cannot, in good conscience, provide drugs and services that violate our convictions based on freedom of conscience.”

Yet although a U.S.C.C.B. statement echoed this sentiment by declaring that “justice has prevailed,” it also noted that the court did not extend its decision to non-profit entities like the Little Sisters of the Poor.

“The Court clearly did not decide whether the so-called ‘accommodation’ violates RFRA when applied to our charities, hospitals and schools, so many of which have challenged it as a burden on their religious exercise,” the U.S.C.C.B. noted.

In the Archdiocese of Washington, where Cardinal Donald Wuerl was unavailable for comment, a media statement said: “Although today’s decision does not directly resolve the legal challenges to the HHS mandate brought by religious non-profit entities, the fundamental principles regarding religious liberty which were adopted by the Court provide the Archdiocese and its related entities great hope that their right to operate in accordance with their religious beliefs will be similarly vindicated.”

A similar statement came from the chancery of Bishop Robert McManus of Worcester, unavailable for comment due to illness. It additionally quoted Pope Francis as saying that religious freedom “is the freedom to live according to ethical principles, both privately and publicly.”

“It is not limited to worship within a building but includes the right to live one’s faith in society,” the Worcester statement emphasized.

Even though the court’s ruling didn’t address non-profit lawsuits, supporters of the Hobby Lobby case noted there was now a legal opening for the bishops to receive a favorable resolution.

Mark Rienzi, senior counsel for the Becket Fund for Religious Liberty, which represented Hobby Lobby, said the legal question now is whether the accommodation offered to groups like the Little Sisters of the Poor violates RFRA.

“The way the court did the analysis and the way the court explained how you do religious freedom analysis for Supreme Court cases bodes very well for those non-profit cases,” Rienzi told America by telephone.

He added, “It’s true that this only addressed the business cases, but the way the court explained how the law works, it sure looks like it’s going to end up providing protection for non-profits too.”

Regarding the Hobby Lobby ruling, Rienzi said he was unaware of any substantial cause for concern on the part of U.S. Catholic bishops.

“I don’t have the slightest idea what their issues or concerns might be, if any,” Rienzi told America. “But I think it’s a very positive decision both for businesses and for people like the Little Sisters. It’s a very strong version of the Religious Freedom Restoration Act that the court talks about.”

Sean Salai, S.J., is an editorial intern serving for summer 2014 at America.

Show Comments (
1
)
Comments are automatically closed two weeks after an article's initial publication. See our comments policy for more.
Vert Gil
5 years 7 months ago
Much thanks to you such a great amount of for the exact useful article, extremely supportive to the general public and I trust you will continue presenting and following with respect to on this.buy likes
Advertisement