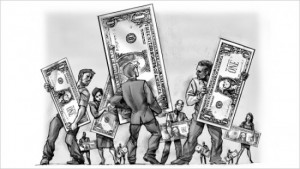 Many of us know the ruckus that emerged when Pope Francis tweeted: “Iniquitas Radix Malorum” (“Inequality is the root of evil”). He got accused, by the likes of Rush Limbaugh, of being a Marxist. But Francis made clear what he meant in a talk with U.N. representatives in Rome. The common good, a just society, must address glaring and destructive inequalities. Much the same message is found in French economist Thomas Piketty's new book, Capitalism in the Twenty-First Century. Of course, no one who knows Alexis de Tocqueville's classic work on Democracy in America doubts that relative equality is a pre-condition for any true democracy.

I just finished reading an extraordinary book, The Spirit Level: Why Greater Equality Makes Societies Stronger by Richard Wilkinson and Kate Pickett (Bloomsbury Books, 2010). Citing the book, the U.K.'s Conservative Prime Minister David Cameron noted: "that among the richest countries, it's the more unequal ones that do worse according to almost every quality of life indicator. Per capita GDP is much less significant for a country's life expectancy, crime levels, literacy and health than the size of the gap between the richest and poorest in the population. We all know, in our hearts, that as long as there is deep poverty living systematically side by side with great riches, we all remain the poorer for it." Many in the United States, one of the most unequal developed countries, worry that instead of De Tocqueville's esteemed democracy, America has become a plutocracy.

The genius of The Spirit Level lies in its careful use of the U.N.'s comparative data for 23 relatively developed nations (including Japan, the Scandinavian countries, Belgium, the Netherlands, Canada, Italy, Spain, Germany, Portugal, New Zealand, Australia, the U.S. and Singapore). In more equal countries, such as Japan, Canada and Belgium, the richest 20 percent of the population is worth about four times as much as the poorest 20 percent. In the United States, the richest 20 percent possess nine times the wealth of the poorest 20 percent. In the United States inequality has grown apace since the late 1970s. America's top 1 percent received 23 percent of total income in 2007, triple the 8 percent they took home in 1980. The top CEOs in America, in the 1950s and 60s, received 25 to 30 times the wage of ordinary workers; by 1980 this stood at 40 times and in 2007 350 times!

Carefully drawing on this data (and for the various states of the United States, census data), The Spirit Level shows the consequences of greater inequalities in the more unequal nations and states: (1) Levels of trust drop; (2) Mental illness and addiction to alcohol and drugs increase; (3) Life expectancy is lower and infant morality higher; (4) Rates of obesity increase; (5) Children's educational performance drops; (6) There are more births to unmarried teenagers; (7) Homicides and imprisonment rates increase; (8) Social mobility is blocked.

Using U.N. and U.S. census data for the 23 countries and the 50 U.S. states, the book shows that levels of trust in public affairs and of strangers is lower in countries and states where income differences are higher. The reported level of trust in the United States dropped from 60 percent in 1960 to 40 percent in 2004. Robert Putnam, in his now classic book Bowling Alone, had already shown how inequality is related to 'social capital,' by which he meant the sum total of people's involvement in community life. As other studies have shown, income inequality is the 'prime mover' of trust in a stranger. Impact on trust is more strongly related to income inequalities than rates of unemployment, inflation or economic growth. It should not be surprising then that America saw a collapse of hitch-hiking in the 1970s, the growth of gated communities and the exponential growth of home security systems as inequalities grew. Moreover, women enjoy a higher status in more equal countries.

Mental illness and alcohol and drug addiction is also higher in more unequal countries (thus, higher in the United Kingdom and the U.S. than in Belgium, Canada, and the Netherlands). Addiction is higher in U.S. states with less equal incomes. Babies in the United States are twice as likely to die in their first year as babies in Japan. Sweden (a more equal country) has longer life expectancy than the U.S. The same impact on infant deaths and life expectancy shows up in comparisons of the more and less equal states in the U.S. Inequality also correlates obestity; the wider the income gaps, the wider the waistlines! The United States now ranks 30th in terms of its level of health. More unequal countries and more unequal U.S. states also have worse educational outcomes among students and have higher student drop out rates.

The authors make a crucial point: "The differences between more or less equal societies are large—problems are anything from 3 times to 10 times as common in the more unequal societies. These differences are not differences between high and low risk groups within the population which might apply only to a small proportion of the population or just to the poor. Rather they are differences between the prevalence of different problems which apply to the whole population." Take life expectancy as an example. Sweden has lower death rates than the United Kingdom in all classes. The highest death rates in Sweden, found in the lowest classes, are still lower than the rates in the highest income classes in the United Kingdom. Again, " even the children of parents with the highest levels of education did better in Finland and Belgium than in more unequal U.S.A. or The United Kingdom." Importantly, even when you compare groups of people with the same income, you find that those in more unequal societies do worse than those on the same income level in more equal societies. More equal societies are also more innovative, having more patents per 10,000 inhabitants.

No man and no society or strata of society is, thus, an island unto itself. Greater equality can come from higher taxes and redistribution schemes. It might come from regulations about just how much higher a CEO's salary should be above the average wage. But some equality (e.g., in Japan or in the state of New Hampshire) comes less from redistribution schemes than from more equal incomes even before taxes. Clearly, in the United States, much of our comparative inequality comes from the comparative weakness of trade unions; from abandonment of productivity-sharing agreements; the strength of the political right; tax rates which are less progressive than in the 1960s; cuts in benefits; failure to maintain an adequate minimum wage. Workers in more unequal societies, such as ours, also work longer hours. There may be no magic scheme to make the U.S. less unequal but we can and should recognize that our inequalities now make all of us worse off, even the rich among us, when compared to our counterparts in more equal developed nations.

John A. Coleman
Show Comments (
2
)
Comments are automatically closed two weeks after an article's initial publication. See our comments policy for more.
Marie Rehbein
7 years ago
I am having a little trouble accepting that the problems are caused by inequality. It may be possible that the prevalence of these problems indicates a general cultural mentality that is self-centered instead of group-centered. In other words, correlation rather than causation such that the inequality is just one more consequence of the typical worldview of most citizens. If the majority world-view were more fellow citizen oriented, then policies regulating taxation and business practices would reflect that, in my opinion.
Joshua DeCuir
7 years ago
I find a lot of fuzziness in this piece's argument. For example, I find it curious that the author lists as one of the causes of inequality "the strength of the political right", but completely ignores the fact that it was a Democrat President who both cut the capital gains rate and signed NAFTA into law. Certainly those policies are not neglible among the many contributing to stagnating wages. I found Ross Douthat's blog today helpful, too, in setting out some policy proposals much more bipartisan than simply hiking marginal tax rates: http://nyti.ms/1nZFIEw