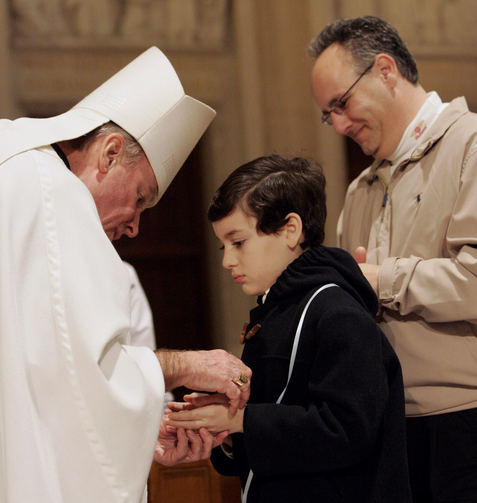 Twice I have received the sacrament of the anointing of the sick. The first time was four years ago, when I was diagnosed with breast cancer; the second, a couple weeks ago when I learned that the breast cancer had metastasized.

The sacrament involved both the sacrament of reconciliation and the anointing of my head and hands. It immersed me in the love of the church, a profound experience that drove home the fact that as part of the Christian community, I do not stand alone when facing troubled times.

On both occasions, friends joined me as our pastor came to my home to lead the service. It included my favorite prayer, Psalm 139, which reminds us that God is familiar with all our ways, knowing us from our very beginnings and standing with us through everything.

Despite these examples, however, research shows that the sacrament is both misunderstood and underutilized, even by church-going Catholics, people who go to Mass at least once a week. According to a report six years ago from the Georgetown University-based Center for Applied Research in the Apostolate, only 63 percent of those who attend Mass weekly or more have requested the sacrament for themselves or an immediate family member. CARA said that only 45 percent reported they considered it “very important to them to receive the sacrament of the anointing of the sick at some point.”

There are gender differences too. More women (57 percent) than men (45 percent) have requested the sacrament. And younger Catholics are less likely than older ones to seek the sacrament when ill.

The situation suggests an educational challenge for the Catholic Church.

Misconceptions need to be addressed. Once known as Extreme Unction and the last rites, the sacrament of the anointing of the sick used to be practically synonymous with imminent death. The very name “last rites” scared some people and became unwanted reality therapy for others. Depending upon one’s viewpoint, it became a last step in the leaving of life or a first step toward the new life in eternity.

For some the misunderstanding goes even further afield. The sacrament of the sick is for the living, yet one pastor told me ruefully that he had just received a call from a widow who wanted him to administer the sacrament to her husband who had just died.

A sacrament, once defined in the Baltimore Catechism as “an outward sign instituted by Christ to give grace,” is powerful, both in testimony to what it represents and in realty, what it gives—in this instance, healing of the soul and sometimes the body. The Catholic community deprives itself of comfort and grace when the anointing of the sick is underutilized. Perhaps it is time for an educational campaign to alert church-going Catholics of how much the anointing of the sick has to offer.

Show Comments (
5
)
Comments are automatically closed two weeks after an article's initial publication. See our comments policy for more.
Bruce Snowden
5 years 4 months ago
A rare, beautiful sacramental experience happened to me one day. A scheduled reception of the Sacrament of Reconciliation by a priest-friend at the rectory was cancelled because I had become ill. The priest told me he would come to my home to administer the Sacrament "How great!" I thought.. When he arrived not only did Confession happen, but he also gave me the Sacrament of the Anointing of the Sick, followed by the Sacrament of the Eucharist. This THREE FOR ONE experience, Three Sacraments during One Visit, was truly a rare, beautiful sacramental experience gratefully remembered. The anointing that goes with the Sacrament for the Sick was especially memorable. Anointing in the Sacraments of Baptism, Confirmation, and for the Sick, remind us laity how closely connected we are to Christ as King, Priest, Prophet, giving us a deep appreciattion into the rootings of our Faith.
Bill Mazzella
5 years 4 months ago
Mary Ann, we join with the church in prayer for your healing. As we participate in and pray for each others well being.
Bruce Snowden
5 years 4 months ago
Frank Mazzella is right. Sister Mary Ann, let me join in prayer for your well being, far better than simply telling my story. I apologize for my insensitivity.
Mike Evans
5 years 4 months ago
The church continues to treat this sacrament as "Extreme Unction" despite the theological explanations and experiences of so many people. The priest too often is seen as the "angel of death" descending upon the sick bed with a last minute offer of salvation. Too often, the people have been taught that they should not call upon the priest for anointing until they are sure the sick person is about to die. It's as if a mortal error might result if the person didn't die, recovered and later needed to be anointed again. In our parish we have provided for at least two sacramental anointing opportunities each year as part of the regular Sunday Mass celebration. Today, most folk will come forward to be anointed. At first, people wondered what illness or malady Mr. Smith or Mrs. Jones was suffering from to receive anointing. Now they understand the sacrament is available to all of us who must finally admit we suffer illness, weakness, frailty, lingering aches and pains and reactions to the hazards and infections of life itself. It is a humbling experience for everyone to pray together for each other in such a specific way and then for most of us, young and old alike, to be anointed with the healing grace of the sacrament. Why on earth would we want to withhold this grace until near death?
Mary Waskowiak
5 years 4 months ago
Mary Ann, Thank you for allowing your life to speak. Your words, your experience are invitations to all of us - and I join in praying for you and all that you need at this time.
Advertisement